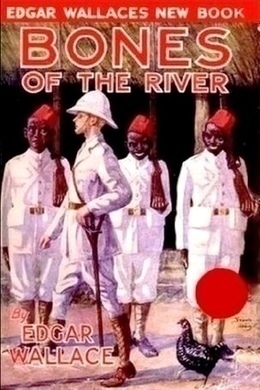 Bones of the River

It is a time when the world’s most powerful nations are vying for colonial honor, a time of trading steamers and tribal chiefs. In the mysterious African territories administered by Commissioner Sanders, Bones persistently manages to create his own unique style of innocent and endearing mischief.

“Look after the chickens,” said Hamilton sardonically, “put the cat out, and don’t forget to wind up the clock,”

Lieutenant Tibbetts inclined his head with, as he believed, a certain quiet dignity.

“And take something for that stiff neck of yours,” added Hamilton.

Mr. Commissioner Sanders came back from the deck of the Zaire to the little concrete quay that jutted out from the residency grounds.

He was leaving on a short tour of inspection, and with him went Captain Hamilton and half a company of Houssas. Mr. Tibbetts, whose more familiar name was Bones, was staying behind in charge, and would be for seven days Deputy Commissioner, Deputy Commander of the troops, Deputy Paymaster-General, and Chief of Staff. He was also temporarily in control of twenty-five Orpington hens, three cockerels and a new fowl-house, the property of his superior officer. The cat and the clock were figments of Captain Hamilton’s imagination.

“And by the way”–Hamilton, one foot on the deck of the little steamer and one on the quay, turned–“cut out the fairy tales, Bones.”

“If you have to entertain callers, tell ‘em something useful such as: A squared plus B squared equals C squared–a little algebra would improve the moral status of the wandering Isisi.”

Once before, whilst Bones had been in charge of the station, there had come a canoe from the Isisi country, carrying a small chief with a grievance to lay before the Commissioner. And Bones, being unable to settle their problem, had improved the shining hour by giving them a rough-and-ready translation from Grimm. It was not a happy experiment, for when the little chief had gone back to his village he had practised the new magic, with disastrous results, for, failing to turn his nagging wife into a tree, he had, in his annoyance, beaten her so severely that she had died.

“Lord, the magic was as the lord Tibbetts told me, for I sprinkled her with water and said ‘Be thou a tree,’ but because the woman has an evil mind she would not obey the lord’s magic.”

“Sarcasm, my dear old commander, is wasted on me. I shall simply shut myself up with my jolly old studies and refuse to see anybody. As to your indecent old cocks and hens, I refuse absolutely to have anything to do with ‘em. There’s nothing in King’s Regulations about looking after chickens–I hate to remind you, but you really ought to know, dear old officer, that it’s not my duty to give them their milk or whatever nourishment the unfortunate animals want…”

The hawser splashed into the water, and her stern wheel moving briskly, the Zaire slipped to midstream and set her nose to the tawny current.

“Teach your own chickens!” screeched Bones.

Lieutenant Tibbetts had three day-dreams. In point of fact, he had near three hundred, but there were three favourites. The first of these had to do with the rescue of beautiful females from various dangers. Bones possessed (in his dream) a dark girl with big, luminous eyes and slim, svelte figure. And a fair girl with a complexion like milk and a figure that was not so slim; and a dashing and rather a fastish kind of girl, who got into scrapes against his earnest advice, defied him and went her own wilful way, leaving a stern young lover behind whose grief and anguish none would guess from a glance at his pale, set face. And when he rescued her, she used either to fall weeping into his arms, or fall weeping to her knees, or fall prostrate at his feet. She invariably fell one way or another, and was forgiven, or wasn’t forgiven, according to the mood in which Bones happened to be.

His second dream was of digging up enormous sums of money and buying a wonderful yacht, which would be manned by silent, saturnine and mysterious men. He would sail to unknown seas and reappear unexpectedly at Cowes. It wasn’t always at Cowes–but was invariably before a large, fashionable and appreciative audience. And beautiful girls would see the yacht come sailing majestically to its anchorage, and would say to one another or anybody who happened to be round:

“It is the The Yellow Vampire returned from one of its strange voyages. Look! That is Captain Tibbetts, the millionaire, on the bridge. They say he hates women. How I should like to know him!”

He had a third, and this was the dearest of all. It involved the discovery by the higher authorities of his extraordinary powers of organisation, his amazing knowledge of criminology, and the fear that his name inspired in the breasts of evildoers. Delicate and refined young women riding in the park would turn and gaze after his sombre figure and glance significantly at one another.