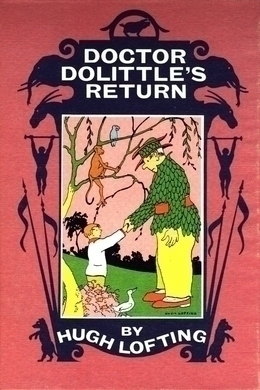 Doctor Dolittle’s Return is lighter and more comic than other Dolittle books. Tommy Stubbins waits for Doctor Dolittle’s return from the Moon. When the Doctor returns he is anxious to write of what he has experienced. This proves more difficult than expected. The poignancy of the doctor’s lunar experiences is juxtaposed with his hilarious attempts to be put into jail so he will be free of all responsibilities and will be able to write his book.

Doctor Dolittle had now been in the moon for a little over a year. During that time I, as his secretary, had been in charge of his household at Puddleby-on-the-Marsh. Of course a boy of my age could not take the great man’s place–nobody could, for that matter. But I did my best.

At the beginning for a few weeks it was not easy. We were all so anxious and worried about John Dolittle. We did not seem to be able to keep our minds on anything but that he was still in the moon and what might be happening to him. So it was in our talking too: no matter what we started to discuss or chat about, our conversation always ended on the same question.

Yet I do not know what I would have done if it had not been for the animals. Ah, those animals of John Dolittle’s! Dab-Dab the duck, the careful housekeeper who spent her life looking after others–even if she did it scolding them most of the time; Jip the dog, brave, generous, happy-go-lucky sportsman, always ready for a good scrap, a good story, a good country walk or a good sleep; Too-Too the owl, silent and mysterious, with ears that could hear a pin drop in the snow, a lightning calculator–you never knew what he was thinking about–but he seemed to guess things, to feel them, witch-like, before they happened; dear, old, clumsy Gub-Gub the pig, always in hot water, taking himself very seriously, for ever treading on somebody’s toes but providing the world with lots of fun; Whitey the white mouse, a gossip, very well-behaved, very clean and neat, inquisitive, taking in life every moment and finding it full of interest. What a family! No one, unable to talk the language of birds and beasts, will ever understand how thoughtful and helpful they could be.

Of course, it must not be forgotten that they were very experienced. Never before, I suppose, has a group of animals been gathered under one roof that had seen so much, gone to so many places and done so many things with human beings. This made it possible for them to understand the feelings of people, just as knowing their language made it possible for John Dolittle and myself to understand them and their troubles.

Although I tried hard not to show it, they all knew how miserable I felt about having left the Doctor in the moon, and they did their best to cheer me up. Dab-Dab formed a regular school programme for me for what she called an “advanced course in animal languages.” Each night, when there was no moon to be watched–or when it was cloudy–she told off one of the household to play the part of teacher for me. And in this way I was not only able to keep up my Piggish, Owlish, Duckish, Mouser languages and the rest, but I improved a great deal upon what I already knew. I came to understand and use a great many tricky little niceties of meaning which I had never known before.

Of this Gub-Gub the pig, Too-Too the owl, the white mouse and the others of the Doctor’s household were very proud. They said that if I kept on at that rate it would not be long before I could talk their different tongues as well as John Dolittle, the greatest naturalist of all time. Of course I could never quite believe that; but it encouraged me a lot just the same.

One who did a great deal to cheer us up in those long days and nights was Cheapside, the London sparrow. Born and brought up in the struggle and strife of a big city, he would not, could not, be beaten by any misfortune. It was not that he did not know and feel the danger the Doctor was in, as much as any of us. But it was part of his character always to look on the bright side of things. He was not with us all the time. He had to pop over (as he called it) to London every once in a while, to see his wife, Becky, and his hundreds of children, cousins and aunts who picked up a living around the cab-ranks near St. Paul’s Cathedral and the Royal Exchange.

From these relations he would bring us back all the gossip of the big city, such as that the Queen had a cold in her head (one of Cheapside’s nieces had a nest behind a shutter in Buckingham Palace); there was a dog show on at the Agricultural Hall; the Prime Minister had tripped over his own gown, going up the steps at the opening of Parliament, and fallen on his nose; a ship had arrived at the East India Docks with three real live pirates on board, captured in the China Sea, etc. etc.