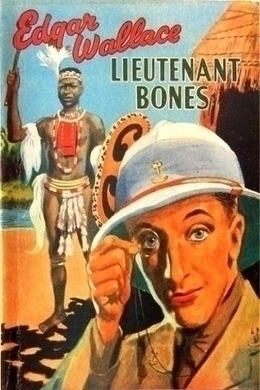 It is a time when the major world powers are vying for colonial honors, a time of juju, witch doctors, and an uneasy peace with Bosambo, the impressive chief of the Ochori. When Commissioner Sanders goes on leave, the trusty Lieutenant Hamilton takes over administration of the African territories. However, yet again, the trouble-prone Bones, while meaning to assist, only manages to spread his own unique style of innocent and endearing mischief.

There was a lawless group of villages set upon a wooded ridge at the confluence of B’suri and the Great River, and these villages were called by the name of the largest, M’fumbini-falapa. It had another name which I will not give, lest this story falls into the hands of innocent people who speak the B’mongo tongue, but it may be translated in a gentlemanly way as “Everlastingly nasty.” It was neither clean within, nor picturesque from without. The huts straggled and strayed without order or symmetry. They were old huts, and patched huts, and many were uglified by the employment of rusty scraps of galvanized iron, for near by, cala-cala long ago, an optimistic British company had erected a store for the collection of palm nuts. The enterprise had failed, and the store had been left derelict, and in time the wild had grown round and over it. And the people of M’fumbini had in their furtive, foraging way taken scraps–they did nothing systematically or thoroughly–and had added abomination to abomination until their village was an eyesore and an offence to all beholders.

Sanders had argued and ordered, held palaver after palaver, but all to no purpose. They were an isolated folk, for here the rivers run very swiftly together, and landing on the littered beach was attended by risks which their neighbours seldom cared to accept. So they lived alone with their skinny children and their indescribable wives, and were disowned both by the Isisi and the N’gombi, with whom they claimed tribal associations.

The effect of environment on character has been too often noted to require enlarging upon in this narrative. The M’fumbini folk were liars and thieves, who practised magic and believed in horrible ju-jus. Lonely fishermen who speared their waters had a habit of disappearing and there can be no doubt that they were “chopped,” for the M’fumbini were cannibals. Only once were they detected.

Mr. Commissioner Sanders arrived on a certain night and surprised the villagers at a particularly unpleasant festival. At dawn his soldiers strapped the hands and feet of the chief, slipped a rope round his neck, and hanged him to a very high tree. Sanders might have saved himself the trouble. Within a year the new chief had developed a secret society called “Three Sticks,” which enjoyed a ritual which is not reducible to print.

If they were isolated, they sent out their scouts and spies, who ranged through the Territories, wandering mendicants who lived on the hospitality of friendly or apathetic tribes, and avoided those who were neither friendly nor quiescent. These travellers learnt many things, but one N’kema, a shrewd youth with one eye–he would, of course, have been killed by the healthy tribes, which do not tolerate any kind of bodily deformity–returned on a certain day with news, and there was a grand palaver.

“N’kema, my own sister’s son,” introduced the chief to the squatting assembly, “has heard many wonders, and my ju-ju has whispered to me that there is truth in his words. Hear him, people, s’ibi m’laka”

And N’kema spoke, and told of a white man who had come to the Territories, and by strange instruments had made a marvellous liquid which drove people to wild happiness, and of how the people had brought rubber and ivory and all the most splendid possessions to exchange for the Waters of Madness. But Sandi, the fox, smelt him out and killed him, and now all the people were crying out for the magic waters.

“And this I learnt, O chief and people, that in far countries, where the River-With-One-Bank runs, [The Sea–EW] there is much Water-That-Burns, and the fire-ships bring them in big pots and float them to shore. Now, I think that if we dig up our ivory, and I go to these wonderful places and trade the ‘teeth’ for the water, and bring it here secretly, we shall be rich.”

“Lord, Lord,” said the one-eyed man eagerly, “I have very cunning thoughts in my head, for in the night, when Sandi sleeps, I will take a big canoe filled with treasure past his fine house and along the River-With-One-Bank to the places where I may trade. Also I have found a man of the Akasava, who has lived in these far lands, who will guide me.”