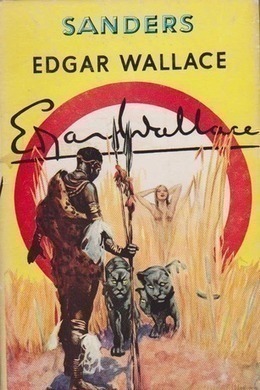 Employing his unique style of innocent and endearing humour, Bones has written to the newspapers The Surrey Star and The Middlesex Plain Dealer inviting the Foreign Secretary to pay a visit to the African territories which they administer. It is against the regulations and his boss Hamilton is furious. While world powers vie for colonial honours, Sanders and his assistants attempt to administer an uneasy peace in a climate of ju-ju and witch doctors, and all the while Bosambo, chief of the Ochori, watches closely.

All this happened in the interim between excellencies, or it could hardly have happened at all.

His Excellency, the retiring Administrator of the Reserved Territories, had departed amidst the banging of guns and the playing of the national anthem by a small band of near-white musicians, all of whom, and especially the cornet, had a tendency to play flat. The new Excellency was enduring the agony of gout at his house in Budleigh Salterton in Devon, and his departure from home was indefinitely postponed.

A change of administration made little or no difference to the people of the big river, and Captain Hamilton of the King’s Houssas, for one, was hardly conscious of the lacuna as he strode savagely towards the hut which housed his youthful second in command.

His annoyance was well warranted, for Lieutenant Tibbets had committed the unpardonable crime of writing to the newspapers–a weakness of his. Hamilton was moist and furious, for the afternoon sun blistered the world, and as he crossed the yellow oven-floor called a parade-ground, the heat of it came through the soles of his boots and tortured him.

The barrack hutments which formed one side of the square danced and shimmered in the heat haze; he saw the fronds of the Isisi palms in a blur; even the weaver birds were silent; when it grows too hot for the weavers to talk, it is very hot indeed.

Kicking open the door of Lieutenant Tibbetts’s hut, he stepped in and snorted his disgust. Mr. Tibbetts, whose other name was Bones, lay face upward on the top of his bed; and he was arrayed in a costume beyond forgiveness, for not Solomon in all his glory wore purple pyjamas with alternate green and ochre stripes.

Hamilton flung down upon the table the paper he had been carrying as Bones opened one eye.

‘“Morning, sir,” he said, slightly dazed. “Is it still raining?”

“‘Morning!” snapped Hamilton. “It is within an hour of dinner, and I’ve something to say to you. Bones!”

“Wake up, and hide your hideous feet!”

The eyelids of the sleeper fluttered; he murmured something about not seeing the point–he had at least seen the newspaper, and recognised the Gothic title-piece.

“The point is. Bones,” said Hamilton awfully, “nobody knows better than you that it is an offence for any officer to write to the newspapers on any subject! This”–he liked the folded newspaper on the table–“this is an outrage!”

“Surrey Star and Middlesex Plain Dealer, sir,” murmured Bones, his eyes closed, a picture of patience, forbearance and resignation, “with which, sir, is incorporated the Sunbury Herald and Molesey Times, sir.”

His long body was stretched luxuriously, his hands were clasped beneath his head, his large red feet overhung the end of the bed. He had the air and manner of one who was deeply wronged but forgave his enemies.

“It doesn’t matter what paper you write to–”

“‘To which you write,’ dear old officer,” murmured Bones. “Let us be jolly old grammarians, sir, an’ superior; don’t let us go around debasin’ the language–”

“Get up, you insubordinate devil, and stand on your big feet!” hissed the Captain of Houssas; but Lieutenant Tibbetts did not so much as open his eyes.

“Is this a friendly discussion, or isn’t it, dear old sir?” lie pleaded. “Is it a friendly call or a council of war, dear old Ham?”

Hamilton gripped him by the silk collar of his pyjama coat and jerked him to his feet.

“A newspaper man you will never be,” said Hamilton. (Here Bones bowed gravely.) “You can’t spell, for one thing!”

“Neither could dear old Napoleon,” said Bones firmly, “nor dinky old Washington–spellin’ is a sign of a weak mind. You’re a good speller, I admit it, dear old Demosthenes–”

“The point is this–and I’m perfectly serious”–Hamilton pushed his junior on to the bed, and he collapsed obediently–“you really must not write political articles, suggesting that the Secretary of State should come and ‘see with his own eyes’”–Hamilton sought for the offending paragraph and read it–”‘…the work that is being carried out by young officers unknown (except by the indigenous natives, who adore them) and unhonoured…’–of all the rubbish!”

Bones shrugged his narrow shoulders; his silence was offensively respectful.

“You’ll not write any more of these self-advertising letters, Bones–either to the Star, the Comet, the Moon, the Sun, or any other member of the solar system.”

“Let us keep religion out of the discussion, dear old Ham,” said Bones in a hushed voice.

It is doubtful whether Mr. Nickerson Haben had even heard of the existence of that organ of public conscience, the Surrey Star any Middlesex Plain Dealer. He was not the type of man who gave a thought to any newspaper that had a circulation of less than half a million.