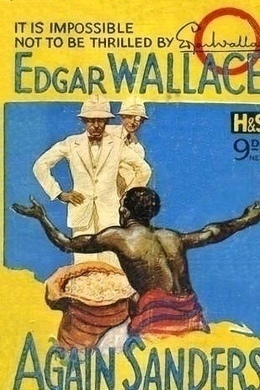 The situation appears calm in the colonial area of the Sanders. But dark clouds are gathering on the horizon and the Captain Hamilton and the inexperienced Lieutenant Bones need to pass some exciting adventure before you can enjoy life on the power again. The book consists of twelve short stories loosely strung together and can therefore well be read without first reading the other African novels of Edgar Wallace.

Makara, Chief of Kobala’ba, was paddled down the river to within ten miles of the residency, and here he hired new paddlers from a lower–river village, leaving the ten girls who had paddled him so far in charge of the village headman.

He was young and skinny and beautiful to see, for not only did he wear the robe of monkey skins which is the robe of his rank, but his forearms were invisible under brass bangles; his hair was dyed red with ingola, his legs shone with oil, and he wore anklets of copper that clinked as he walked to the residency, where Mr. Sanders awaited him.

“I see you, lord Sandi,” he greeted the Commissioner, and his voice had the quality of boredom and weariness.

“I see you, little chief,” said Sanders, and there was acid in his tone. “And yet as I sat here before my fine house watching you come from the river, I had a strange thought. For it seemed to me that you were not Makara, son of Lebulana, son of Elibi that warrior, but a dancing woman of Kobala’ba, such as a man can buy for a thousand matakos.”

If Makara felt shame he showed none.

“In my land all men are pretty,” he said complacently. “Even in Kobala’ba I wear a feather in my hair and sometimes about my waist.”

Sanders showed his teeth in a smile that was entirely mirthless.

“Rather would I see you with a spear in your hand and a shield on your arm, Makara,” he said. “It seems that there are too many women in Kobala’ba–”

“Lord,” said Makara eagerly, “that is why I came; for soon your lordship will send to us for the rubber and fish which you steal from us every year for your government, and because we are few men we have nothing to give.”

Sanders took a cheroot from his pocket and lit it before he replied, his audience watching him anxiously.

“Was there tribute when I sent before?” asked Sanders. “And when I sent before then, did I find skins and rubber, and before then, even? Makara, your people of all the people on the river pay no tax to my king. And because you are far away and I cannot come in my little ship along the shallow river, I think you laugh at me. Strange stories come along the river to me–of women who hunt and women who fish, and women who build houses. It seems that there is a new race of slaves growing under my eyes; slaves who are penned like dogs and beaten like dogs. Which is against all the laws of all the tribes, but terribly against my law. Some day I will come and see.”

“Lord, all that you hear is lies,” said Makara, “for my young men are very strong and brave, and women have their proper place, which is in the fields and at the fires–”

“And at the paddles?” asked Sanders significantly. “My spies tell me that women brought you down the river, and that you left them at the village of Chubiri, so that I should not be offended. The palaver is finished.”

Makara went back to his village a little uneasy.

For all that Sanders had heard was true: Makara had brought about a revolution in the custom of the country. In this black hinterland, men have a defined place and the sphere of their activities is rigidly confined by immemorial custom. For example, no woman is allowed to build a hut. The most lordly of the tribes reserve that work to men, partly, it is believed, because house–building has been the work of man since the beginning of time, and partly because, as is well known, a terrible curse lies on any roof that is thatched by a woman. No matter how indolent men may be, the erection of a house is their sole prerogative. On the other hand, no man with any spirit will till a field or grow corn or soak manioc or cook a meal. There once was a tribe so degraded that the men cooked their own dinners, and the name of that tribe was a reproach from the Lado to Eschowe. No woman may hunt or fish: that also is man’s job, and the folk of Kobala’ba had terribly offended in this respect.

“They come by night from the little river between the grass,” reported an indignant petty chief of the Isisi; “ten women in each canoe, and they spear fish under the eyes of my young men, and when my fisher men speak to them they answer them shamefully. Now, lord, because these are Akasava folk we can do nothing. A moon and a rime of a moon ago, I sent word to the great chief of the Akasava and told him of this terrible thing. He said that Kobala’ba was a country by itself, and that though the people were of his tribe they mocked him. Also, lord, they say that in Kobala’ba the women take their spears and hunt in the forest, and that the men sit at home in their huts, which is strange to me.”