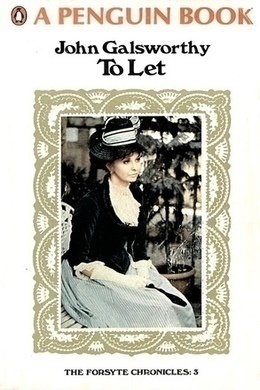 To Let, the final volume of the Forsyte Trilogy, chronicles the continuing feuds of the two factions within the troubled Forsyte family. The shadow of the past returns to haunt the lives of a new generation, as Irene’s son Jon falls in love with Soames’s daughter Fleur with tragic consequences. Soames Forsyte has built a good life for himself with his second wife Annette, and he has a new focus and purpose his beautiful, beloved daughter Fleur. But the sins of the father come flooding back to cast a shadow over his child’s future. When Fleur, a vibrant and impetuous young woman, catches the eye of warm-hearted and idealistic Jon Forsyte at a chance meeting, it seems fate is determined to torture them all with the hurts of the past!

Soames Forsyte emerged from the Knightsbridge Hotel, where he was staying, in the afternoon of the 12th of May, 1920, with the intention of visiting a collection of pictures in a Gallery off Cork Street, and looking into the Future. He walked. Since the War he never took a cab if he could help it. Their drivers were, in his view, an uncivil lot, though now that the War was over and supply beginning to exceed demand again, getting more civil in accordance with the custom of human nature. Still, he had not forgiven them, deeply identifying them with gloomy memories, and now, dimly, like all members, of their class, with revolution. The considerable anxiety he had passed through during the War, and the more considerable anxiety he had since undergone in the Peace, had produced psychological consequences in a tenacious nature. He had, mentally, so frequently experienced ruin, that he had ceased to believe in its material probability. Paying away four thousand a year in income and super tax, one could not very well be worse off! A fortune of a quarter of a million, encumbered only by a wife and one daughter, and very diversely invested, afforded substantial guarantee even against that “wildcat notion” a levy on capital. And as to confiscation of war profits, he was entirely in favour of it, for he had none, and “serve the beggars right!” The price of pictures, moreover, had, if anything, gone up, and he had done better with his collection since the War began than ever before. Air-raids, also, had acted beneficially on a spirit congenitally cautious, and hardened a character already dogged. To be in danger of being entirely dispersed inclined one to be less apprehensive of the more partial dispersions involved in levies and taxation, while the habit of condemning the impudence of the Germans had led naturally to condemning that of Labour, if not openly at least in the sanctuary of his soul.

He walked. There was, moreover, time to spare, for Fleur was to meet him at the Gallery at four o’clock, and it was as yet but half-past two. It was good for him to walk–his liver was a little constricted, and his nerves rather on edge. His wife was always out when she was in Town, and his daughter would flibberty-gibbet all over the place like most young women since the War. Still, he must be thankful that she had been too young to do anything in that War itself. Not, of course, that he had not supported the War from its inception, with all his soul, but between that and supporting it with the bodies of his wife and daughter, there had been a gap fixed by something old-fashioned within him which abhorred emotional extravagance. He had, for instance, strongly objected to Annette, so attractive, and in 1914 only thirty-four, going to her native France, her “chere patrie” as, under the stimulus of war, she had begun to call it, to nurse her “braves poilus,” forsooth! Ruining her health and her looks! As if she were really a nurse! He had put a stopper on it. Let her do needlework for them at home, or knit! She had not gone, therefore, and had never been quite the same woman since. A bad tendency of hers to mock at him, not openly, but in continual little ways, had grown. As for Fleur, the War had resolved the vexed problem whether or not she should go to school. She was better away from her mother in her war mood, from the chance of air-raids, and the impetus to do extravagant things; so he had placed her in a seminary as far West as had seemed to him compatible with excellence, and had missed her horribly. Fleur! He had never regretted the somewhat outlandish name by which at her birth he had decided so suddenly to call her–marked concession though it had been to the French. Fleur! A pretty name–a pretty child! But restless–too restless; and wilful! Knowing her power too over her father! Soames often reflected on the mistake it was to dote on his daughter. To get old and dote! Sixty-five! He was getting on; but he didn’t feel it, for, fortunately perhaps, considering Annette’s youth and good looks, his second marriage had turned out a cool affair. He had known but one real passion in his life–for that first wife of his–Irene. Yes, and that fellow, his cousin Jolyon, who had gone off with her, was looking very shaky, they said. No wonder, at seventy-two, after twenty years of a third marriage!