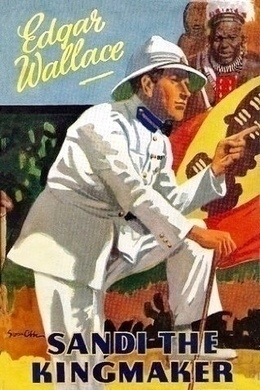 Sanders and Co. return to Africa (following the events in Bones in London) to bring the old Kings country under the Union Jack and to try and find what has happened to a missionary and his daughter. It is written in a delightfully humorous style.

In the village of P’pie, at the foot of that gaunt and hungry mountain which men called Limpisi, or Limbi, there lived a young man whose parents had died when he was a child, for in those far–off days the Devil Woman of Limbi demanded double sacrifices, and it was the custom to slay, not the child who was born upon her holy day–which was the ninth of the new moon–but his parents.

Therefore he was called by acclamation M’sufu-M’goba–‘the-fortunate-boy-who-was-not-his-own-father’. All children who are born of sacrificed parents are notoriously clever, and M’sufu was favoured of ghosts and devils. It is said that when he was walking–young he climbed up to the cave of the Holy Devil Woman herself, passing through the guard of Virgins, who kept the hillside, in a most miraculous way, and that he had tottered into that dreadful cave whence no human had emerged alive, and had found the Old Woman sleeping.

He came forth alive and again reached the village. So it was said–and said secretly between husband and wife, or woman and lover (for these latter trust one another). Aloud or openly not one spoke of such a fearful exploit or even mentioned the Old Woman, save parabolically or by allusion.

But to this visit and the inspiration of The Cave-of-Going-In were ascribed the wonderful powers which came to him later in life.

It is told that, seated at food with one of the families which had adopted him, he suddenly broke an hour’s silence.

“Silence, little child,” said his indignant foster-parent. “Are you not ashamed to talk when I am eating? In this way all devils get into a man’s body when his mind is thrown all ways.”

Nevertheless, a search-party was sent out, and K’lama and his goat were found dead at the bottom of a rocky bluff; and one old man had seen this happen, the goat being suddenly mad and leaping with K’lama at the leash of it, just as the sun rim tipped the mountain-top. At such an hour had M’sufu spoken!

Then another miracle. One Doboba, a gardener, had flogged M’sufu for stealing bananas from his garden.

“Man,” said M’sufu, rubbing his tingling seat, “a tree will fall upon you in two nights, and you will be with the ghosts.”

And two nights after this Doboba died in such a way.

The story and the fame of M’sufu spread until his name was spoken even in the intimate places of the Old King’s hut. And there came one Kabalaka, Chief of all the Tofolaka, this being the country which is separated from the Ochori by the Ghost Mountains, and Kabalaka was a great man in the king’s eyes, being his seni-seni, which means Chief Minister.

“Oh, prophesy for me, M’sufu,” he said, and before the whole twittering village–aghast at the advent of this amazing prince and his ten companies of spearmen and his dancing women–M’sufu stood up.

“What else?” said Kabalaka, not displeased, for he hated the Fongini and Lubolama, their chief, and was jealous of his influence with the Old King.

“Lord,” said the young seer, sweating greatly, “the son of your wife is sick and near to death, but on the rind of the moon he shall live again.”

Kabalaka bent his brows, for he loved the son of his wife, and made a forced march back to Rimi-Rimi to find the child already laid for death, with clay upon his eyelids.

“Wait until the rind of the moon, for this child will not die,” said Kabalaka in a confident tone, but inwardly aching.

So they waited, watching the fluttering breath of the boy, the women-folk going out every morning to pluck green leaves to deck their bodies in the death dance. But on the rind of the moon the child opened his eyes and smiled and asked for milk.

And then a week later, when the people of The True Land, as Rimi-Rimi was called, were labouring to get in their mighty crops, there came to the city Lubolama of the Fongini, begging remission of tribute.

“For my crops have failed, Old King,” he said, “and there has been no rain, so that the fields are cut with great cracks.”

That night the Old King sent for M’sufu, and the prophet, wearing a beautiful brass chain which the grateful Kabalaka had sent him, arrived in the city at the very hour the king’s guard pulled down Hughes at Hughes Lloyd Thomas, Inspector of Territories in the service of the British Government.