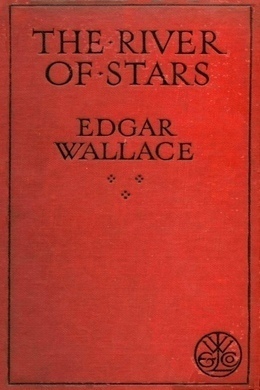 The River of Stars

A story of crime chiefly connected with diamond mines. A series of stories of mysterious crimes and strange events. The problems are solved, not by a commonplace detective, but by a master of psychology. The stories are ingenious, and the man of science works only for the good of humanity.

Amber sat in his cell at Wellboro’ gaol, softly whistling a little tune and beating time on the floor with his stockinged feet. He had pushed his stool near to the corrugated wall, and tilted it back so that he was poised on two of its three legs.

His eyes wandered round the little room critically.

Above the bed and a little to the left was a small window of toughened glass, admitting daylight but affording, by reason of its irregular texture, no view of the world without. On a shelf over the bed was a Bible, a Prayer Book, and a dingy library book.

He made a grimace at the book; it was a singularly dull account of a singularly dull lady missionary who had spent twenty years in North Borneo without absorbing more of the atmosphere of that place than that it “was very hot” and further that native servants could be on occasion “very trying.”

Amber was never fortunate with his library books. Five years ago, when he had first seen the interior of one of His Majesty’s gaols, he had planned a course of study embracing Political Economy and the Hellenic Drama, and had applied for the necessary literature for the prosecution of his studies. He had been “ served out” with an elementary Greek grammar and Swiss Family Robinson, neither of which was noticeably helpful. Fortunately the term of imprisonment ended before he expected; but he had amused himself by translating the adventures of the virtuous Swiss into Latin verse, though he found little profit in the task, and abandoned it.

During his fourth period of incarceration he made chemistry his long suit; but here again fortune deserted him, and no nearer could he get to his reading of the science than to secure the loan of a Squire and a Materia Medica.

Amber, at the time I describe, was between twenty-eight and thirty years of age, a little above medium height, well built, though he gave you the impression of slightness. His hair was a reddish yellow, his eyes grey, his nose straight, his mouth and chin were firm, and he was ready to show two rows of white teeth in a smile, for he was easily amused. The lower part of his face was now unshaven, which detracted from his appearance, but none the less he was, even in the ugly garb of his bondage, a singularly good-looking young man.

There was the sound of a key at the door, and he rose as the lock snapped twice and the door swung outward.

“75,” said an authoritative voice, and he stepped out of the cell into the long corridor, standing to attention.

The warder, swinging his keys at the end of a bright chain, pointed to the prisoner’s shoes neatly arranged by the cell door.

Amber obeyed, the warder watching him.

“Why this intrusion upon privacy, my Augustus?” asked the kneeling Amber.

The warder, whose name was not Augustus, made no reply. In earlier times he would have “ marked “ Amber for insolence, but the eccentricities of this exemplary prisoner were now well-known, besides which he had some claim to consideration, for he it was who rescued Assistant Warder Beit from the fury of the London Gang. This had happened at Devizes County Gaol in 1906, but the prison world is a small one, and the fame of Amber ran from Exeter to Chelmsford, from Lewes to Strangeways.

He marched with his custodian through the corridor, down a polished steel stairway to the floor of the great hall, along a narrow stone passage to the Governor’s office. Here he waited for a few minutes, and was then taken to the Governor’s sanctum.

Major Bliss was sitting at his desk, a burnt little man with a small black moustache and hair that had gone grey at the temples.

With a nod he dismissed the warder.

The Governor was thoughtfully silent for a moment, drumming his fingers noiselessly on his blotting-pad.

“What are you going to do?” he demanded suddenly.

“I shall pursue my career of crime,” he said cheerfully, and the Governor frowned and shook his head.

“I can’t understand you–haven’t you any friends?”

“No, sir,” Amber was even more cheerful than before. “I have nobody to blame for my detection but myself.”

The Major turned over some sheets of paper that lay before him, read them, and frowned again.

“Ten convictions!” he said. “A man of your capacity–why, with your ability you might have been–”