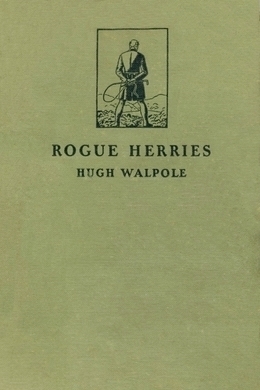 Described on its first publication by John Buchan as the finest English novel since Jude the Obscure, Rogue Herries tells the story of the larger than life Francis Herries who uproots his family from Yorkshire and brings them to live in Borrowdale where their life is as dramatic as the landscape surrounding them. Proud, violent and impetuous he despises his first wife, sells his mistress at a county fair and forms a great love for the teenage gypsy Mirabell Starr. Alongside this turbulent story, runs that of his son David, with enemies of his own, and that of his gentle daughter Deborah with placid dreams that will not be realised in her father’s house.

A little boy, David Scott Herries, lay in a huge canopied bed, half awake and half asleep.

He must be half awake because he knew where he was–he was in the bedroom of the inn with his sisters, Mary and Deborah; they were in the bed with him, half clothed like himself, fast sleeping. Mary’s plump naked arm lay against his cheek, and Deborah’s body was curled into the hollow of his back and her legs were all confused with his own. He liked that because he loved, nay, worshipped, his sister Deborah.

He knew also that he was awake because, lying looking up, he could see the canopy that ran round the top of the bed. It was a dull faded green with a gold thread in it. He could see the room too, very large, with rough mottled white walls and a big open stone fireplace; there was a roaring, leaping fire–the only light in the room–and he could see very clearly the big, shining brass fire- dogs with grinning mouths like dragons and stout curly tails.

He knew, too, that he was awake, because he could see Alice Press sitting there, her clothes gathered up to her knees, warming her legs. He did not like Alice Press, but she always fascinated him, and he wondered now of what she was thinking, so motionless, her head with its red hair pushed forward, her naked neck above her silver brocade.

He knew that he was awake, because he could hear the sounds of the inn, voices calling, doors banging in the wind, steps on the stair, and even the snap-snap of horses’ hoofs on the cobbles of the yard. He could hear the wind too, rushing up to the windows and shaking the panes and tearing away again, and then he shivered, pleasantly, luxuriously, because it was so warm and safe where he was and so cold and dangerous outside.

Then he shivered again because he remembered that he, with the others, must soon plunge out again into that same wind and mud and danger.

He would like to stay thus, in this warm bed, for ever and ever.

But, although he was awake enough to know all these things, he must be asleep also–asleep because, for one thing, the room would not stay still, but leapt and rollicked with the fire. All the things in it moved; the fire-dogs grinned and yawned; over a large arm- chair of faded red silk, oddly enough, some harness had been slung, and it lay there in coils of silver and dark brown leather, and these coils turned and stretched and slipped like snakes. Then against the wall there was a long, thin mirror in tarnished silver and, in this, Alice Press was most oddly reflected, the side of her face that was shown there being very thin and red, her hair tawny- peaked like a witch’s hat; her eyebrow jumped up and down in a terrifying manner.

Only David was not afraid. He was a very fearless boy. But he thought, as he lay there and watched, how ugly she was in the mirror, and that if his father saw her thus he would not chuck her beneath the chin and so make his mother unhappy. And, although he was not afraid, he was glad nevertheless that Mary’s warm arm was against his cheek and the round shape of Deborah’s body against his back.

Because it might be that after all Alice Press was a witch. (He had always had his secret suspicions.) The way that she sat there now, so motionless, bending forward, was just as though she were making spells–and the silver harness blinked and the glass of the mirror trembled as the flame of the fire rose and fell again.

Then, again, it must be that he was still asleep because, although he knew that he was lying in his bed, he knew also that he was yet bumping and tossing in the coach. In that coach they had surely been for weeks and weeks, or so at least it had seemed to his tired and weary body.

At first when they had set out from Doncaster–how long ago?–he had been all pride and pleasure. It had been a fair and lovely morning–one of the last of the late summer days. The sun was shining, the birds singing, such gay bustle about the cobbled courtyard of the inn, the maids looking down from the windows, the hostlers busy about the horses, the postilions polite and eager to his father, all of them, Mother and Father Roche and Alice Press and Mary and Deborah fitting so comfortably into the soft warm inside of the coach, that had even pictures of hunting painted on the walls and little windows with gold round the edges.

Yes, it had been all gay enough then, but how miserable it had soon become! He could not now divide the days and nights from one another: moreover, he was still there in the coach, bumped up and down, thrown here and there, sleeping, waking with cramp and pins and needles, and Deborah crying and needing comforting, and Mary cross, and his mother frightened, and Alice Press sulky. Only Father Roche, reading in his purple book, or looking steadily in front of him, never perturbed nor upset nor unhappy, always grave and kind, and miles and miles away from them all!