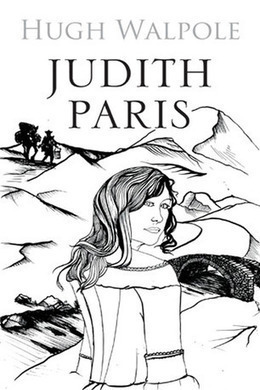 The old woman and the new-born child were the only living things in the house.

The old woman, Mrs. Henny, had finished her washing and laying-out of the bodies of the child’s father and of the child’s mother. She had done it alone because she had been afraid to leave the house with no one alive in it save the new-born child. Now she was exhausted and, in spite of her labour, fearfully chilled, for the snow, although it fell now more lightly, was piled high about the doors and windows as if, with its soft thick fingers, it wished to strangle the house.

She was very cold, so she drank some gin, although it was not as a rule her weakness. The bodies of Mr. and Mrs. Herries lay, the eyes decently closed, the pale hands folded, each in its proper bed.

A fine heat burnt through Mrs. Henny’s old body. The gin was good. Then her head fell forward and she slept.

The old house rattled and squealed in the wind that was rising up now that the snow had almost ceased to fall. Feet seemed to creep up and down the stairs, fingers were at the windows, but the dead and Mrs. Henny slept on.

Then, in the room where the old woman, the child, and its mother were, from the window a piece of glass, very old and dark green like weeded water, was loosened with the wind and fell tinkling to the boards. The snow blew in like a live thing and the room was icily chilled.

The child that had been sleeping felt the cold and began to cry, a shrill cry on one note. But Mrs. Henny heard nothing, the gin holding her fast.

Squire Gauntry–little Tom Gauntry–riding along the Borrowdale path just below the house on the farther side of the little bridge, heard the cry. It was strange that from so weak a creature the cry should be so clear. He heard it, and he pulled up his horse; the six hounds who were with him stopped also. The snow had but just ceased to fall and for the first time that day. It was so unusual in that country for there to be so heavy a fall that he halted and looked about him in wonderment. The roofs of Rosthwaite, all the hills, the fields were buried in the white smooth covering, and now, for the first time, light began to break through. The grey stuff of the snowy sky was torn and a faint green field spread over the dim hills, and the snow began shyly to sparkle. The wind blew the top of the snow into little smoking spirals. Some rooks flew, like black leaves, cawing, breaking the sacred silence. The green field spread.

Herries, the house, raised on its little hill, to Gauntry’s right, seemed to be overwhelmed by the snow, huddled, shapeless, helpless, and out of that white shapelessness this thin, desolate, tiny cry continued.

Gauntry was eager to be home; his high black riding-coat was heavy with snow, he was weary and chilled, but there was something in that cry that moved him. A hard-bitten little man, leading always his own life and telling everyone else to go to the devil, nevertheless he was sentimental too: so he turned his horse, crossed the bridge over the stream, and, followed by the six hounds, guided the animal through the snow, and, striking with his whip on the gate of the courtyard, holloaed three times.

There was no answer at all. The silence settled down again. There was no sound but the thin persisting cry. He hesitated as to his next step. He had met Herries once and again, but had no intimacy with him. Indeed, no one had. He was said to be a queer customer, one not easy to deal with, one who would not thank you for uninvited interference.

Gauntry was just like that himself, and, for that very reason, had always felt a sympathy with Herries. He liked a man who told the world to go to the devil: it was what the world was meant for. Nevertheless, he was tired, cold, thirsty. Why should he put himself about for a man who would only curse him?

Then something about the stillness of the house hit his attention. The place was but a ruin in any case; under the snow he could fancy how the boards creaked and the chimneys rocked.

He dismounted from his horse, pushed wide the old, grumbling gate, the snow falling thickly from it, then, followed in silence by the hounds, crossed the courtyard.

The house-door was unbarred. The iron handle turned easily. He entered, to be met by two rusted suits of armour stationed at the foot of the stairs. Still there was silence everywhere, save for the lament of the child.

How cold the house was! He shivered, drawing his cloak tighter about him. Then again he holloaed. No answer. Where the devil were they hiding? Not a sound, not even a clock-tick. Up the creaking stairs he went, the dogs padding after him.

He came to a room hung with faded brown tapestries; there was a portrait of a wicked-looking old man in the dress of Elizabethan times, dead ashes in the stone fireplace, remains of a meal, bread, a mutton bone, on the table.