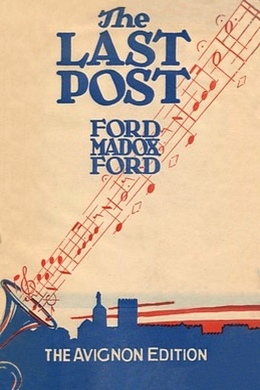 Last Post, the fourth and final volume of Parade’s End, is set on a single post-war summer’s day. Valentine Wannop and Christopher Tietjens share a cottage in Sussex with Tietjens’ brother and sister-in-law. Through their differing perspectives, Ford explores the tensions between his characters in a changing world, haunted by the experience of war, facing an insecure future for themselves and for England. The Tietjens’ ancestral home has been let to an American, its great tree felled; those like Tietjens who have served in the war find there is no place for them in a demoralised civilian society. The celebrations of Armistice Day have been replaced by the uncertainties of peacetime.

He lay staring at the withy binders of his thatch; the grass was infinitely green; his view embraced four counties; the roof was supported by six small oak sapling-trunks, roughly trimmed and brushed from above by apple boughs. French crab-apple! The hut had no sides.

The Italian proverb says: He who allows the boughs of trees to spread above his roof, invites the doctor daily. Words to that effect. He would have grinned, but that might have been seen.

For a man who never moved, his face was singularly walnut-coloured; his head, indenting the skim-milk white of the pillows should have been a gipsy’s, the dark, silvered hair cut extremely close, the whole face very carefully shaven and completely immobile. The eyes moved, however, with unusual, vivacity, all the life of the man being concentrated in them and their lids.

Down the path that had been cut in swathes from the knee-high grass, and came from the stable to the hut, a heavy elderly peasant rolled in his gait.

His over-long, hairy arms swung as if he needed an axe or a log or a full sack to make him a complete man. He was broad-beamed, in cord breeches, very tight in the buttock; he were black leggings, an unbuttoned blue waistcoat, a striped flannel shirt, open at the perspiring neck, and a square, high hat of black felt.

“Want to be shifted?”

The man in the bed closed his eyelids slowly.

The other again similarly closed his eyes. The standing man supported himself with an immense hand, gorilla-like, by one of the oaken posts.

“Best droper cider ever I tasted,” he said. “Is Lordship give me. Is Lordship sester me: ‘Gunning,’ e ses, … ‘the day the vixen got into keeper’s coop enclosure … ’”

He began and slowly completed a very long story, going to prove that English noble landlords preferred foxes to pheasants. Or should! English landowners of the right sort.

Is Lordship would no more ave that vixen killed or so much as flurried, she being gravid like than…. Dreadful work a gravid vixen can do among encoops with pheasant poults…. Have to eat fer six or seven, she have! All a-growing…. So is Lordship sester Gunning….

And then the description of the cider … Ard! Thet cider was arder than a miser’s art or’n ole maid’s tongue. Body it ad. Strength it ad. Stans to reason. Ten year cider. Not a drop was drunk in Lordship’s ouse under ten years in cask. Killed three sheep at week fer his indoor and outdoor servants. An three hundred pigeons. The pigeon-cotes is a hundred feet high, an the pigeons’ nesteses in oles in the inside walls. Clap-nests a ole wall at a go an takes the squabs. Times is not what they Was, but is Lordship keeps on. An always will!

Old Gunning lumbered slowly up the path towards the stable, his hands swinging. The stable was a tile-healed, thatched affair, no real stable in the North Country sense—a place where the old mare sheltered among chickens and ducks. There was no tidiness amongst South Country folk. They hadn’t it in them, though Gunning could bind a tidy thatch and trim a hedge properly. All-round man. Really an all-round man; he could do a great many things. He knew all about fox-hunting, pheasant-rearing, wood-craft, hedging, dyking, pig-rearing and the habits of King Edward when shooting. Smoking endless great cigars! One finished, light another, throw away the stub…. ’

Fox-hunting, the sport of kings with only twenty per cent. of the danger of war! He, Mark Tietjens, had never cared for hunting; now he would never do any more; he had never cared for pheasant-shooting. He would never do any more. Not couldn’t; wouldn’t. From henceforth…. It annoyed him that he had not taken the trouble to ascertain what it was Iago said, before he had taken Iago’s resolution…. From henceforth he never would speak word…. Something to that effect: but you could not get that into a blank verse line.

Perhaps Iago had not been speaking blank verse when he had taken his, Mark Tietjens’, resolution…. Took by the throat the circumciséd dog and smote him…. Good man, Shakespeare! All-round man in a way, too. Probably very like Gunning. Knew Queen Elizabeth’s habits when hunting; also very likely how to hedge, thatch, break up a deer or a hare or a hog, and how to serve a writ and write bad French. Lodged with a French family in Crutched Friars or the Minories. Somewhere.

The ducks were making a great noise on the pond up the hill. Old Gunning in the sunlight lumbered between the stable-wall and the raspberry canes, up-hill. The garden was all up-hill. He looked across the grass up at the hedge. When they turned him round he looked down-hill at the house. Rough, grey stone!