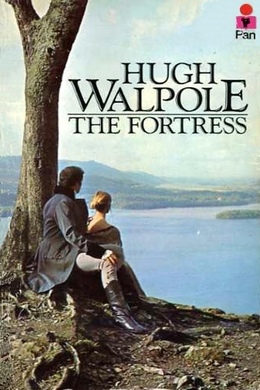 It had been the wish of her whole life to flee from all the Herries, but Walter Herries had challenged her, and she had taken up the challenge’. Judith Paris, now middle aged returns to the Lakes to deal with the bitter feud between the two branches of the family. A feud culminating in the construction by one branch of a huge house known as The Fortress, which will dominate the land of the others. But within this conflict the children of the two families have important roles to play.

‘All is well,’ Judith said quietly, coming forward and stroking the red apples of the sofa. ‘I shall not leave you, Jennifer. It is better I remain.’

As her hand mechanically stroked those same rosy apples, so friendly and familiar, she reflected.

Yes, this simple sentence declared the crisis of her whole existence. Nothing ever again could matter to her so deeply as this decision. With it she had cut away half her life, and perhaps the better half. She was not by nature a dramatic woman; moreover, she had but lately returned from the funeral of the best friend she had, and she was forty-seven years of age in this month of January 1822. So–for women then thought forty-seven a vast age–she should be past drama. Quietly she sat down on the sofa, leaned forward, looking into the fire. Jennifer Herries was speaking with eager excitement, but Judith did not hear her. Jennifer was fifty- two and should also be past drama but, although a lazy woman, she liked sensation when it did not put herself to discomfort.

Judith at that moment heard and saw nothing but the past, the past that she was irrevocably forsaking. Strange how the same patterns were for ever returning! Her father had been a rogue and a vagabond, a rebel against all the order and material discipline of the proper Herries. In his early years he had married Convention and of her had had a son, late in life he had married a gipsy and of her had had a daughter in his old age, when he was over seventy. David at one end of his life, Judith at the other.

In their histories again the pattern had been repeated. David of his marriage had had two sons: Will the money-maker, Francis the dreamer. Will prospered even now in the City; Francis was a failure, dead of his own hand.

And with their children again the pattern was repeated. For Will’s son Walter was triumphant near by in his house at Westaways, and Francis’ widow, Jennifer, and Francis’ children, John and Dorothy, remained, undefended, here at Uldale.

It was here that she, Judith, came into the pattern. Daughter of two vagabonds, mother of an illegitimate boy, she should be vagrant. Half of her–the finer, truer, more happy and fortunate half–(she nodded at the fire in confirmation) was so. But the other half was proper, managing, material, straight-seeing Herries. She threw her wild half into the blaze (her hand flickered towards the fire). It was gone. She remained to fight for Jennifer, Jennifer’s children, John and Dorothy, and, maybe who knows? … her own boy Adam.

To fight whom? Here Jennifer’s voice broke through:

‘…That will be most agreeable. I have always said that the Yellow Room needs but a trifle altering and it will make … but Francis would never see it. And with a new wallpaper … We must certainly have a new wallpaper … ‘

To fight Walter Herries, and all that were his. As ‘Rogue’ Herries in his tumble-down house in Borrowdale had fought all the world, as Francis his grandson had tried to fight the world and failed, so now would she fight Walter, flamboyant, triumphing Walter, made of Will and his money-bags, sworn to extinguish Jennifer and her children and all that were in Fell House, Uldale.

It had been the wish of her whole life to flee from all the Herries and live in the hills as her mother had lived before her, but Walter Herries had challenged her and she had taken up the challenge.

‘…Not that it should be difficult,’ Jennifer was saying, ‘to find another girl to work with Doris. Girls will come willingly enough now that you are going to remain, Judith, dear … ‘

Walter and his two children, Uhland and Elizabeth, with all the money in the world, against Jennifer and HER children, undefended and helpless, Judith and her Adam, fatherless and by law without a name …

Jennifer was going on: ‘And Walter will not DARE, now that you are remaining, Judith … You are the only one of us all of whom he is afraid … He will not DARE … ‘

Would he not, so large and confident and powerful? Had he not said that he would snuff them out–Jennifer, John, Dorothy–raze Fell House to the ground? And what had SHE, small, elderly, alone, with no one in the world belonging to her save Adam, to oppose to that strength?

Nevertheless, she looked across to Jennifer triumphantly.

‘We will give Walter something to think about,’ she said.

‘And you can go to Watendlath when you wish,’ Jennifer said.

‘But how foolish, Judith. It is only a mile or two.’

‘It is the other end of the world.’

She did not tell anyone how that night, with Adam asleep beside her, she cried. She lay awake for half the night, hearing the owl hoot, a mouse scuttle, and seeing a slow, lonely moon trace with her silver finger a question mark across the floor.