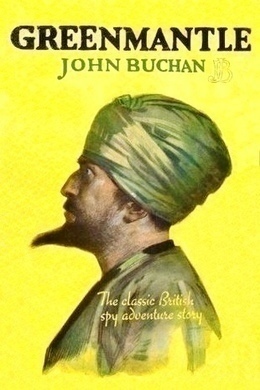 Greenmantle is a tale of intrigue and adventure set during the First World War. It features Richard Hannay, hero of the author’s earlier novel The Thirty-Nine Steps. As he travels through Europe to foil a German plot and find an Islamic Messiah, he is joined by three more of Buchan’s heroes: Peter Pienaar, a Boer scout; John Blenkiron, an American determined to fight the Kaiser; and Sandy Arbuthnot (Greenmantle), modeled on Lawrence of Arabia. The intrepid friends move in disguise through Germany to Constantinople to the Russian border to confront their enemies—the grotesque Stumm and the evil beauty Hilda von Einem. [Major Hannay’s narrative of this affair has been published under the title of The Thirty–nine Steps.]

I had just finished breakfast and was filling my pipe when I got Bullivant’s telegram. It was at Furling, the big country house in Hampshire where I had come to convalesce after Loos, and Sandy, who was in the same case, was hunting for the marmalade. I flung him the flimsy with the blue strip pasted down on it, and he whistled.

‘Hullo, Dick, you’ve got the battalion. Or maybe it’s a staff billet. You’ll be a blighted brass-hat, coming it heavy over the hard-working regimental officer. And to think of the language you’ve wasted on brass-hats in your time!’

I sat and thought for a bit, for the name ‘Bullivant’ carried me back eighteen months to the hot summer before the war. I had not seen the man since, though I had read about him in the papers. For more than a year I had been a busy battalion officer, with no other thought than to hammer a lot of raw stuff into good soldiers. I had succeeded pretty well, and there was no prouder man on earth than Richard Hannay when he took his Lennox Highlanders over the parapets on that glorious and bloody 25th day of September. Loos was no picnic, and we had had some ugly bits of scrapping before that, but the worst bit of the campaign I had seen was a tea-party to the show I had been in with Bullivant before the war started. [Major Hannay’s narrative of this affair has been published under the title of The Thirty-nine Steps.]

The sight of his name on a telegram form seemed to change all my outlook on life. I had been hoping for the command of the battalion, and looking forward to being in at the finish with Brother Boche. But this message jerked my thoughts on to a new road. There might be other things in the war than straightforward fighting. Why on earth should the Foreign Office want to see an obscure Major of the New Army, and want to see him in double-quick time?

‘I’m going up to town by the ten train,’ I announced; ‘I’ll be back in time for dinner.’

‘Try my tailor,’ said Sandy. ‘He’s got a very nice taste in red tabs. You can use my name.’

An idea struck me. ‘You’re pretty well all right now. If I wire for you, will you pack your own kit and mine and join me?’

‘Right-o! I’ll accept a job on your staff if they give you a corps. If so be as you come down tonight, be a good chap and bring a barrel of oysters from Sweeting’s.’

I travelled up to London in a regular November drizzle, which cleared up about Wimbledon to watery sunshine. I never could stand London during the war. It seemed to have lost its bearings and broken out into all manner of badges and uniforms which did not fit in with my notion of it. One felt the war more in its streets than in the field, or rather one felt the confusion of war without feeling the purpose. I dare say it was all right; but since August 1914 I never spent a day in town without coming home depressed to my boots.

I took a taxi and drove straight to the Foreign Office. Sir Walter did not keep me waiting long. But when his secretary took me to his room I would not have recognized the man I had known eighteen months before.

His big frame seemed to have dropped flesh and there was a stoop in the square shoulders. His face had lost its rosiness and was red in patches, like that of a man who gets too little fresh air. His hair was much greyer and very thin about the temples, and there were lines of overwork below the eyes. But the eyes were the same as before, keen and kindly and shrewd, and there was no change in the firm set of the jaw.

‘We must on no account be disturbed for the next hour,’ he told his secretary. When the young man had gone he went across to both doors and turned the keys in them.

‘Well, Major Hannay,’ he said, flinging himself into a chair beside the fire. ‘How do you like soldiering?’

‘Right enough,’ I said, ‘though this isn’t just the kind of war I would have picked myself. It’s a comfortless, bloody business. But we’ve got the measure of the old Boche now, and it’s dogged as does it. I count on getting back to the front in a week or two.’

‘Will you get the battalion?’ he asked. He seemed to have followed my doings pretty closely.

‘I believe I’ve a good chance. I’m not in this show for honour and glory, though. I want to do the best I can, but I wish to heaven it was over. All I think of is coming out of it with a whole skin.’

He laughed. ‘You do yourself an injustice. What about the forward observation post at the Lone Tree? You forgot about the whole skin then.’

I felt myself getting red. ‘That was all rot,’ I said, ‘and I can’t think who told you about it. I hated the job, but I had to do it to prevent my subalterns going to glory. They were a lot of fire-eating young lunatics. If I had sent one of them he’d have gone on his knees to Providence and asked for trouble.’