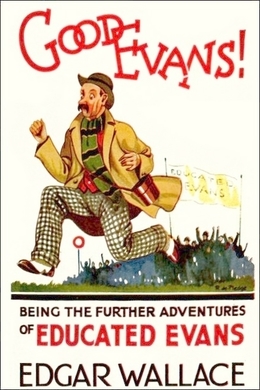 Being Further Adventures of Educated Evans

This continues the life of Evans, Edgar Wallace’s Cockney tipster and ‘the wizard of Camden Town’. Follow the loves, predictions and calamities of this likeable hero of the Turf in the seventeen tales of this book. It is not only race-lovers who will love Evans, but lovers of life itself.

It was when an excited and vengeful client demanded what the so-and-so and such a thing Mr. Evans meant by sending out three selections for one race, that the educated man laid down his system of ethics.

“Tippin’,” he said, “is ta’tics. You start out to do one thing an’ do another. Bettin’s a battle. You got to change your plans the same as the celebrated Napoleon Bonaparte, him that was killed in the Battle of Waterloo.”

This philosophy he impressed upon a Miss Casey, with disastrous effects. As to Miss Casey…

To sit beside a beautiful lady in the pit of the Lyceum is indeed a privilege. To feel her small hand steal into yours in the excitement and emotion occasioned by Miss Frederick’s acting, is thrilling. Educated Evans had both these experiences. The lady was young. Her face was as fresh and as sweet as a pansy. She had red lips and large grey eyes … presently to be blinded with hot tears at the pitiable plight of Madame X.

Evans returned the grip of her hand and reeled.

“Whatever will you think of me?” she asked penitently as they came out of the theatre.

“My opinion of you,” said Mr. Evans passionately, “is the same as the well-known Henry the Eighth had for the far-famed Joan of Arc.”

They went to a famous corner shop café and Evans blew a dollar on coffee and doughnuts and a box of chocolate tied up with blue ribbon–which was Miss Casey’s favourite colour.

Mr. Evans agreed to meet her in Hyde Park the following evening, and went home walking on air.

A week later Mr. Challoner (“The Miller” to the cognoscenti of Camden Town) called on the educated man. And the real reason for his call was an article in a certain weekly publication. The article was entitled “Fortunes from Tipping,” and the paragraph ran:

“Did you supply that information?” asked The Miller sternly.

“It’s publicity or press work,” murmured Evans. “I had a chat with the reporter–met him up West—-“

“Ten pun’ nine an’ eleven,” said Evans calmly. “Write that down an’ if it ain’t five figures nothin’ is.”

He had been putting the finishing touch to a neat little sign on the door–an oblong of wood on which was painted the new house title.

No directory of Camden Town would reveal the whereabouts of “Priory Park” but for the fact that on all circulars to clients, old and new, Mr. Evans added more concisely, “Bayham Mews, N.W.”

“You’ve got a nerve,” said The Miller with that reluctant admiration he offered to the successful criminal. “So far as I can remember, your tip was Asterus.”

Educated Evans closed his eyes, a sure sign of offended dignity, and began to search the one drawer of an article which served as desk, counter, dressing-table, stand for duplicator, and occasionally seat. From the litter the drawer contained he produced a hectographed sheet.

“EDUCATED EVANS! The World’s Chief Turf Adviser (Under Royal Patronage) To all clients I advise a good bet on ASTERUS***

“He ran forward,” said Mr. Evans with even greater simplicity.

“Most horses do,” said The Miller, “unless they’re clothes horses.”

“I also give Sprig–what a double!”

“Sprig? You lie in your boots!” said the indignant Miller. “You said that the Prince of Wales had given you Thrown In!”

“Sprig,” he said. “I’ve got documents to prove that me Ten pun’ Special to all and sundried was Sprig–fear nothing.”

The Miller did not argue. Mr. Evans’ Ten Pound Special was his favourite myth. Like Mrs. Harris, there was no such thing.

Once upon a time Mr. Evans had announced his intention of sending out such a startling service, and had offered it for a beggarly quid a nod, but nobody coughed up and the service fell into disuse. For why, argued the regulars who followed Educated Evans to their ruin, pay a Bradbury for a ten pun’ special when you could get his five pound guarantee wire for a dollar–and that on the nod?

“Them Lubeses is givin’ me trouble, Mr. Challoner,” said Evans, shaking his head sadly. “I’ve done me best to educate the woman but she’s like the far-famed horse that could be led to the slaughter but you couldn’t make him think.