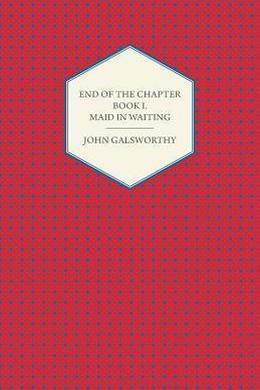 End of the Chapter: Volume 1

This sweeping family saga now moves to the lives and loves of the Cherrells in the early 30s, cousins by marriage to the Forsytes. An old English family, their one constant in an age of change and uncertainty is their ancestral home, Condaford Grange. It is especially precious to young Elizabeth Cherrell, or ‘Dinny’, whose family is everything to her. And when her brother faces extradition to South America, falsely accused of murder, and her cousin is threatened by her mentally unstable husband, Dinny does everything she can to shield them from harm.

The Bishop of Porthminster was sinking fast; they had sent for his four nephews, his two nieces and their one husband. It was not thought that he would last the night.

He who had been ‘Cuffs’ Cherrell (for so the name Charwell is pronounced) to his cronies at Harrow and Cambridge in the ‘sixties, the Reverend Cuthbert Cherrell in his two London parishes, Canon Cherrell in the days of his efflorescence as a preacher, and Cuthbert Porthminster for the last eighteen years, had never married. For eighty-two years he had lived and for fifty-five, having been ordained rather late, had represented God upon certain portions of the earth. This and the control of his normal instincts since the age of twenty-six had given to his face a repressed dignity which the approach of death did not disturb. He awaited it almost quizzically, judging from the twist of his eyebrow and the tone in which he said so faintly to his nurse:

“You will get a good sleep to-morrow, nurse. I shall be punctual, no robes to put on.”

The best wearer of robes in the whole episcopacy, the most distinguished in face and figure, maintaining to the end the dandyism which had procured him the nickname ‘Cuffs,’ lay quite still, his grey hair brushed and his face like ivory. He had been a bishop so long that no one knew now what he thought about death, or indeed about anything, except the prayer book, any change in which he had deprecated with determination. In one never remarkable for expressing his feelings the ceremony of life had overlaid the natural reticence, as embroidery and jewels will disguise the foundation stuff of vestment.

He lay in a room with mullion windows, an ascetic room in a sixteenth-century house, close to the Cathedral, whose scent of age was tempered but imperfectly by the September air coming in. Some zinnias in an old vase on the window-sill made the only splash of colour, and it was noticed by the nurse that his eyes scarcely left it, except to dose from time to time. About six o’clock they informed him that all the family of his long-dead elder brother had arrived.

“Ah! See that they are comfortable. I should like to see Adrian.”

When an hour later he opened his eyes again, they fell on his nephew Adrian seated at the foot of the bed. For some minutes he contemplated the lean and wrinkled brownness of a thin bearded face, topped with grizzling hair, with a sort of faint astonishment, as though finding his nephew older than he had expected. Then, with lifted eyebrows and the same just quizzical tone in his faint voice, he said:

“My dear Adrian! Good of you! Would you mind coming closer? Ah! I haven’t much strength, but what I have I wanted you to have the benefit of; or perhaps, as you may think, the reverse. I must speak to the point or not at all. You are not a Churchman, so what I have to say I will put in the words of a man of the world, which once I was myself, perhaps have always been. I have heard that you have an affection, or may I say infatuation, for a lady who is not in a position to marry you–is that so?”

The face of his nephew, kindly and wrinkled, was gentle with an expression of concern.

“It is, Uncle Cuthbert. I am sorry if it troubles you.”

“My dear Adrian, the world has changed in its judgments since my young days, but there is still a halo around marriage. That, however, is a matter for your conscience and is not my point. Give me a little water.”

When he had drunk from the glass held out, he went on more feebly:

“Since your father died I have been somewhat in loco parentis to you all, and the chief repository, I suppose, of such traditions as attach to our name. I wanted to say to you that our name goes back very far and very honourably. A certain inherited sense of duty is all that is left to old families now; what is sometimes excused to a young man is not excused to those of mature age and a certain position like your own. I should be sorry to be leaving this life knowing that our name was likely to be taken in vain by the Press, or bandied about. Forgive me for intruding on your privacy, and let me now say good-bye to you all. It will be less painful if you will give the others my blessing for what it is worth–very little, I’m afraid. Good-bye, my dear Adrian, good-bye!”

The voice dropped to a whisper. The speaker closed his eyes, and Adrian, after standing a minute looking down at the carved waxen face, stole, tall and a little stooping, to the door, opened it gently and was gone.

The nurse came back. The Bishop’s lips moved and his eyebrows twitched now and then, but he spoke only once:

“I shall be glad if you will kindly see that my neck is straight, and my teeth in place. Forgive these details, but I do not wish to offend the sight … “

Adrian went down to the long panelled room where the family was waiting.

“Sinking. He sent his blessing to you all.”