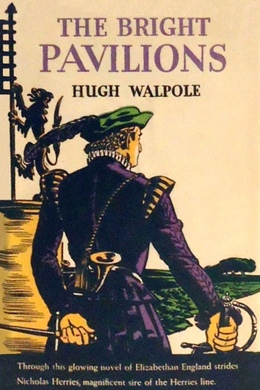 On the grey afternoon of December 22nd, 1569, Nicholas Herries sat his lovely mare Juno on the moor inland from Silloth in Cumberland, every nerve alert because of the event that any instant might bring.

Nicholas, at this critical moment of his history, was twenty-five years of age, the son of Sir Michael Herries of Court Mallory, near Lewes in Sussex. He was a large young man, six foot four inches in height, of vast breadth of shoulder, a mighty chest, great thighs and a round, rosy-cheeked, merry-eyed head and a thick neck. He was not as yet fat, although later he might be. He was an exceedingly cheerful young gentleman.

Save for his attendant servant, Jack Oates, who sat his horse, obediently, at a distance, there was no other human body to be seen in all the visible world.

Nicholas wore a hat of green leather that sat firm and close on his head, round his thick neck a falling band, a green doublet close to his body, his boots black, long and close to the leg and the boothose some two inches higher than his boots and tied with points. The hilt of his sword was handsomely gilded. His mare and himself seemed like one. Not an inch of him stirred, and his servant, a little man with a cynical eye, was as still as he.

The scene was, at first glance, peaceful enough. A thin line of sea like a long attenuated skein of smoke was barely to be distinguished from the grey of the monotonous sky. The Scottish hills were like vapours of breath. In the bend of the moor close at hand could be seen the roofs of some hamlet. To the right like a mark of astonishment was a peel-tower raised many years ago against the Scots marauders.

Otherwise not a sound, not a sign, save a hawk quivering above them, then suddenly plunging to its prey. But Nicholas, who was no fool for so big a young man, knew that there was more in the scene than met the eye. He was doubly engaged, for while he was so passionately alert for what was happening at his side, his mind was also introspectively moving around his own private personal world. Although he did not know it he was pursuing two opposite activities at one and the same time.

He was thinking first and foremost of his young brother, Robin, whom he was that night to meet in the little town of Keswick. His young brother was his great duty to the world. Ever since that day when at the age of five he had been shown the white, thin face of that helpless infant in its froth of lace and silk, he had sworn that no harm should come to it. The contrast between his own five- year sturdy ruddiness and that fragility had struck deep to his heart. ‘Robin shall know no harm.’ THAT was his faith, and equal with it was his worship of his Queen. For a man so young he had already a clear view of her as she was–whimsical in personal fancy, parsimonious, often cruel, often coquetting from vanity, often jealous, often absurd in her love of flattery–but always with a passion for her country’s greatness which, however it might be confused with a passion for herself, was nevertheless a grand inspiration to all young men who sought to do great deeds even as Nicholas did.

To these two faiths he added a third, and that was for his own immediate family. The small junior branch of Herries to which he belonged, although allied to the great family of Howard and, on another side, to the Herries of Lowland Scotland, was the subject of his simple and even spiritual worship. He would not be a Duke of Norfolk or Northumberland or Earl of Leicester. He would not be my Lord Herries although he followed what he could hear of that bold Earl’s doings with interest–but only Nicholas Herries, elder son of Sir Michael Herries of Court Mallory, and faithful member of that little group: his father’s brother, Sir Martin Herries, whom now he was going to visit; the Herries of Temple Guard near Salisbury; and a stray or two like his old cousin Penelope Herries of Dover; old Daniel Herries, a squire in Herefordshire; and his numerous cousinhood.

Here were his three faiths and they were all that he had, save only, the greatest of all, his faith in himself.

Now, at this present instant, all four faiths were concerned, for during the last few weeks there had been stirring deeds in Northern England.