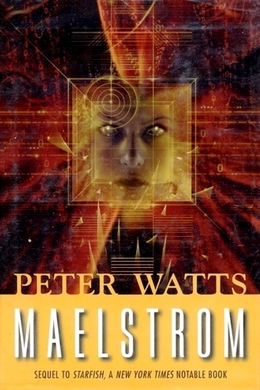 An enormous tidal wave on the west coast of North America has just killed thousands. Lenie Clarke, in a black wetsuit, walks out of the ocean onto a Pacific Northwest beach filled with the oppressed and drugged homeless of the Asian world who have gotten only this far in their attempt to reach America. Is she a monster, or a goddess? One thing is for sure: all hell is breaking loose.

This is the sequel to his Starfish and part of the Rifters Trilogy.

The Pacific Ocean stood on her back. She ignored it.

It crushed the bodies of her friends. She forgot them.

It drank the light, blinding even her miraculous eyes. It dared her to give in, to use her headlamp like some crippled dryback.

She kept going, in darkness.

Eventually the sea floor tilted into a great escarpment, leading into light. The bottom changed. Mud disappeared under viscous clumps of half-digested petroleum: a century of oil spills, a great global rug to sweep them beneath. Generations of sunken barges and fishing trawlers haunted the bottom, each a corpse and crypt and epitaph unto itself. She explored the first one she found, slid through shattered windowpanes and upended corridors, and remembered, vaguely, that fish were supposed to congregate in such places.

A long time ago. Now there were only worms, and suffocating bivalves, and a woman turned amphibious by some abstract convergence of technology and economics.

It was growing almost bright enough to see without eyecaps. The bottom twitched with sluggish eutrophiles, creatures so black with hemoglobin they could squeeze oxygen from the rocks themselves. She flashed her headlamp at them, briefly: they shone crimson in the unexpected light.

Sometimes, now, the water was so murky she could barely see her own hands in front of her. The slimy rocks passing beneath took on ominous shapes, grasping hands, twisted limbs, hollow death’s heads with things squirming in their eyes. Sometimes the slime assumed an almost fleshy appearance.

By the time she felt the tug of the surf, the bottom was completely covered in bodies. They, too, seemed to span generations. Some were little more than symmetrical patches of algae. Others were fresh enough to bloat, obscenely buoyant, straining against the detritus holding them down.

But it wasn’t the bodies that really bothered her. What bothered her was the light. Even filtered through centuries of suspended effluvium, there seemed far too much of it.

The ocean pushed her up, pulled her down, with a rhythm both heard and felt. A dead gull spun past in the current, tangled in monofilament. The universe was roaring.

For one brief moment, the water disappeared in front of her. For the first time in a year she saw the sky. Then a great wet hand slapped the back of her head, put her under again.

She stopped swimming, uncertain what to do next. But the decision wasn’t hers anyway. The waves, marching endlessly shoreward in gray, seething rows, pushed her the rest of the way.

She lay gasping on her belly, water draining from the machinery in her chest: gills shutting down, guts and airways inflating, fifty million years of vertebrate evolution jammed into thirty seconds with a little help from the biotech industry. Her stomach clenched against its own chronic emptiness. Starvation had become a friend, so faithful she could scarcely imagine its absence. She pulled the fins from her feet, rose, staggered as gravity reasserted itself. A shaky step forward.

The hazy outlines of guard towers leaned against the eastern horizon, a gap-toothed line of broken spires. Fat tick-like shapes hovered above them, enormous by inference: lifters, tending the remains of a border than had always kept refugees and citizens discreetly segregated. There were no refugees here. There were no citizens. There was only a humanoid accretion of mud and oil with machinery at its heart, an ominous mermaid dragging itself back from the abyss. Undiscardable.

And all this endless chaos—the shattered landscape, the bodies smashed and sucked into the ocean, the devastation reaching God knew how far in every direction—it was all just collateral. The hammer, she knew, had been aimed at her.

It made her smile.