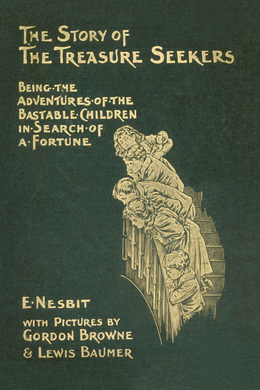 The Story of the Treasure Seekers

Adventures of the Bastable children in search of a fortune

This is the story of the different ways we looked for treasure, and I think when you have read it you will see that we were not lazy about the looking. This novel, the first in what is often called the “Bastable Saga” begins the story of these six children – Dora, Oswald, Dicky, Alice, Noel, and Horace Octavius Bastable. When their mother dies and their father’s business fails, the children embark on a series of adventures. Says Oswald (the book’s narrator) at the start: “I’ll tell you what, we must go and seek for treasure: it is always what you do to restore the fallen fortunes of your House.”

This is the story of the different ways we looked for treasure, and I think when you have read it you will see that we were not lazy about the looking.

There are some things I must tell before I begin to tell about the treasure-seeking, because I have read books myself, and I know how beastly it is when a story begins, “‘Alas!” said Hildegarde with a deep sigh, “we must look our last on this ancestral home”’–and then some one else says something–and you don’t know for pages and pages where the home is, or who Hildegarde is, or anything about it. Our ancestral home is in the Lewisham Road. It is semi-detached and has a garden, not a large one. We are the Bastables. There are six of us besides Father. Our Mother is dead, and if you think we don’t care because I don’t tell you much about her you only show that you do not understand people at all. Dora is the eldest. Then Oswald–and then Dicky. Oswald won the Latin prize at his preparatory school–and Dicky is good at sums. Alice and Noel are twins: they are ten, and Horace Octavius is my youngest brother. It is one of us that tells this story–but I shall not tell you which: only at the very end perhaps I will. While the story is going on you may be trying to guess, only I bet you don’t. It was Oswald who first thought of looking for treasure. Oswald often thinks of very interesting things. And directly he thought of it he did not keep it to himself, as some boys would have done, but he told the others, and said–

‘I’ll tell you what, we must go and seek for treasure: it is always what you do to restore the fallen fortunes of your House.’

Dora said it was all very well. She often says that. She was trying to mend a large hole in one of Noel’s stockings. He tore it on a nail when we were playing shipwrecked mariners on top of the chicken-house the day H. O. fell off and cut his chin: he has the scar still. Dora is the only one of us who ever tries to mend anything. Alice tries to make things sometimes. Once she knitted a red scarf for Noel because his chest is delicate, but it was much wider at one end than the other, and he wouldn’t wear it. So we used it as a pennon, and it did very well, because most of our things are black or grey since Mother died; and scarlet was a nice change. Father does not like you to ask for new things. That was one way we had of knowing that the fortunes of the ancient House of Bastable were really fallen. Another way was that there was no more pocket-money–except a penny now and then to the little ones, and people did not come to dinner any more, like they used to, with pretty dresses, driving up in cabs–and the carpets got holes in them–and when the legs came off things they were not sent to be mended, and we gave up having the gardener except for the front garden, and not that very often. And the silver in the big oak plate-chest that is lined with green baize all went away to the shop to have the dents and scratches taken out of it, and it never came back. We think Father hadn’t enough money to pay the silver man for taking out the dents and scratches. The new spoons and forks were yellowy-white, and not so heavy as the old ones, and they never shone after the first day or two.

Father was very ill after Mother died; and while he was ill his business-partner went to Spain–and there was never much money afterwards. I don’t know why. Then the servants left and there was only one, a General. A great deal of your comfort and happiness depends on having a good General. The last but one was nice: she used to make jolly good currant puddings for us, and let us have the dish on the floor and pretend it was a wild boar we were killing with our forks. But the General we have now nearly always makes sago puddings, and they are the watery kind, and you cannot pretend anything with them, not even islands, like you do with porridge.

Then we left off going to school, and Father said we should go to a good school as soon as he could manage it. He said a holiday would do us all good. We thought he was right, but we wished he had told us he couldn’t afford it. For of course we knew.

Then a great many people used to come to the door with envelopes with no stamps on them, and sometimes they got very angry, and said they were calling for the last time before putting it in other hands. I asked Eliza what that meant, and she kindly explained to me, and I was so sorry for Father.

And once a long, blue paper came; a policeman brought it, and we were so frightened. But Father said it was all right, only when he went up to kiss the girls after they were in bed they said he had been crying, though I’m sure that’s not true. Because only cowards and snivellers cry, and my Father is the bravest man in the world.