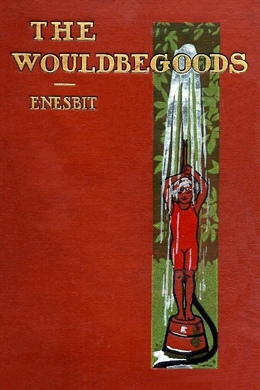 Being the Further Adventures of the Treasure Seekers

Sent away to the country after a particularly unruly episode, the well-meaning but wayward Bastable children solemnly vow to reform their behavior. But their grand schemes for great and virtuous deeds lead to just as much mayhem as their ordinary games, and sometimes more.

‘Children are like jam: all very well in the proper place, but you can’t stand them all over the shop–eh, what?’

These were the dreadful words of our Indian uncle. They made us feel very young and angry; and yet we could not be comforted by calling him names to ourselves, as you do when nasty grown-ups say nasty things, because he is not nasty, but quite the exact opposite when not irritated. And we could not think it ungentlemanly of him to say we were like jam, because, as Alice says, jam is very nice indeed–only not on furniture and improper places like that. My father said, ‘Perhaps they had better go to boarding-school.’ And that was awful, because we know Father disapproves of boarding-schools. And he looked at us and said, ‘I am ashamed of them, sir!’

Your lot is indeed a dark and terrible one when your father is ashamed of you. And we all knew this, so that we felt in our chests just as if we had swallowed a hard-boiled egg whole. At least, this is what Oswald felt, and Father said once that Oswald, as the eldest, was the representative of the family, so, of course, the others felt the same.

And then everybody said nothing for a short time. At last Father said–

The words that followed I am not going to tell you. It is no use telling you what you know before–as they do in schools. And you must all have had such words said to you many times. We went away when it was over. The girls cried, and we boys got out books and began to read, so that nobody should think we cared. But we felt it deeply in our interior hearts, especially Oswald, who is the eldest and the representative of the family.

We felt it all the more because we had not really meant to do anything wrong. We only thought perhaps the grown-ups would not be quite pleased if they knew, and that is quite different. Besides, we meant to put all the things back in their proper places when we had done with them before anyone found out about it. But I must not anticipate (that means telling the end of the story before the beginning. I tell you this because it is so sickening to have words you don’t know in a story, and to be told to look it up in the dicker).

We are the Bastables–Oswald, Dora, Dicky, Alice, Noel, and H. O. If you want to know why we call our youngest brother H. O. you can jolly well read The Treasure Seekers and find out. We were the Treasure Seekers, and we sought it high and low, and quite regularly, because we particularly wanted to find it. And at last we did not find it, but we were found by a good, kind Indian uncle, who helped Father with his business, so that Father was able to take us all to live in a jolly big red house on Blackheath, instead of in the Lewisham Road, where we lived when we were only poor but honest Treasure Seekers. When we were poor but honest we always used to think that if only Father had plenty of business, and we did not have to go short of pocket money and wear shabby clothes (I don’t mind this myself, but the girls do), we should be happy and very, very good.

And when we were taken to the beautiful big Blackheath house we thought now all would be well, because it was a house with vineries and pineries, and gas and water, and shrubberies and stabling, and replete with every modern convenience, like it says in Dyer & Hilton’s list of Eligible House Property. I read all about it, and I have copied the words quite right.

It is a beautiful house, all the furniture solid and strong, no casters off the chairs, and the tables not scratched, and the silver not dented; and lots of servants, and the most decent meals every day–and lots of pocket-money.

But it is wonderful how soon you get used to things, even the things you want most. Our watches, for instance. We wanted them frightfully; but when I had mine a week or two, after the mainspring got broken and was repaired at Bennett’s in the village, I hardly cared to look at the works at all, and it did not make me feel happy in my heart any more, though, of course, I should have been very unhappy if it had been taken away from me. And the same with new clothes and nice dinners and having enough of everything. You soon get used to it all, and it does not make you extra happy, although, if you had it all taken away, you would be very dejected. (That is a good word, and one I have never used before.) You get used to everything, as I said, and then you want something more. Father says this is what people mean by the deceitfulness of riches; but Albert’s uncle says it is the spirit of progress, and Mrs Leslie said some people called it ‘divine discontent’. Oswald asked them all what they thought one Sunday at dinner. Uncle said it was rot, and what we wanted was bread and water and a licking; but he meant it for a joke. This was in the Easter holidays.