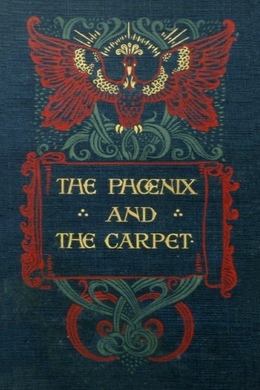 The Phoenix and the Carpet

The four children acquired the magic carpet when they found a special fire egg – it hatched in their nursery fireplace. The phoenix came from the egg, and when he saw their mother’s new Persian rug, he showed them that it was a magical thing – a flying carpet that would take them any time and that place they could wish for. Witty, genuine, full of timeless sympathy and childish sensibility, The Phoenix and the Carpet offers a special ride through wonders for children of all ages.

It began with the day when it was almost the Fifth of November, and a doubt arose in some breast–Robert’s, I fancy–as to the quality of the fireworks laid in for the Guy Fawkes celebration.

‘They were jolly cheap,’ said whoever it was, and I think it was Robert, ‘and suppose they didn’t go off on the night? Those Prosser kids would have something to snigger about then.’

‘The ones I got are all right,’ Jane said; ‘I know they are, because the man at the shop said they were worth thribble the money–’

‘Of course it isn’t,’ said Cyril; ‘one word can’t be grammar all by itself, so you needn’t be so jolly clever.’

Anthea was rummaging in the corner-drawers of her mind for a very disagreeable answer, when she remembered what a wet day it was, and how the boys had been disappointed of that ride to London and back on the top of the tram, which their mother had promised them as a reward for not having once forgotten, for six whole days, to wipe their boots on the mat when they came home from school.

So Anthea only said, ‘Don’t be so jolly clever yourself, Squirrel. And the fireworks look all right, and you’ll have the eightpence that your tram fares didn’t cost to-day, to buy something more with. You ought to get a perfectly lovely Catharine wheel for eightpence.’

‘I daresay,’ said Cyril, coldly; ‘but it’s not YOUR eightpence anyhow–’

‘But look here,’ said Robert, ‘really now, about the fireworks. We don’t want to be disgraced before those kids next door. They think because they wear red plush on Sundays no one else is any good.’

‘I wouldn’t wear plush if it was ever so–unless it was black to be beheaded in, if I was Mary Queen of Scots,’ said Anthea, with scorn.

Robert stuck steadily to his point. One great point about Robert is the steadiness with which he can stick.

‘I think we ought to test them,’ he said.

‘You young duffer,’ said Cyril, ‘fireworks are like postage-stamps. You can only use them once.’

‘What do you suppose it means by “Carter’s tested seeds” in the advertisement?’

There was a blank silence. Then Cyril touched his forehead with his finger and shook his head.

‘A little wrong here,’ he said. ‘I was always afraid of that with poor Robert. All that cleverness, you know, and being top in algebra so often–it’s bound to tell–’

‘Dry up,’ said Robert, fiercely. ‘Don’t you see? You can’t TEST seeds if you do them ALL. You just take a few here and there, and if those grow you can feel pretty sure the others will be–what do you call it?–Father told me–“up to sample”. Don’t you think we ought to sample the fire-works? Just shut our eyes and each draw one out, and then try them.’

‘And Queen Anne is dead,’ rejoined Robert. No one was in a very good temper. ‘We needn’t go out to do them; we can just move back the table, and let them off on the old tea-tray we play toboggans with. I don’t know what YOU think, but I think it’s time we did something, and that would be really useful; because then we shouldn’t just HOPE the fireworks would make those Prossers sit up–we should KNOW.’

‘It WOULD be something to do,’ Cyril owned with languid approval.

So the table was moved back. And then the hole in the carpet, that had been near the window till the carpet was turned round, showed most awfully. But Anthea stole out on tip-toe, and got the tray when cook wasn’t looking, and brought it in and put it over the hole.

Then all the fireworks were put on the table, and each of the four children shut its eyes very tight and put out its hand and grasped something. Robert took a cracker, Cyril and Anthea had Roman candles; but Jane’s fat paw closed on the gem of the whole collection, the Jack-in-the-box that had cost two shillings, and one at least of the party–I will not say which, because it was sorry afterwards–declared that Jane had done it on purpose. Nobody was pleased. For the worst of it was that these four children, with a very proper dislike of anything even faintly bordering on the sneakish, had a law, unalterable as those of the Medes and Persians, that one had to stand by the results of a toss-up, or a drawing of lots, or any other appeal to chance, however much one might happen to dislike the way things were turning out.

‘You know jolly well you can’t,’ said Cyril, bitterly. ‘It’s settled. It’s Medium and Persian. You’ve done it, and you’ll have to stand by it–and us too, worse luck. Never mind. YOU’LL have your pocket-money before the Fifth. Anyway, we’ll have the Jack-in-the-box LAST, and get the most out of it we can.’