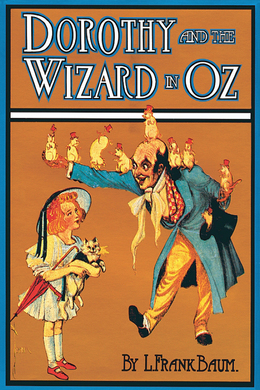 Dorothy and the Wizard in Oz

The fourth book in Baum’s Oz series, Dorothy returns to lands of magic and fantasy with her cousin Zeb, kitten Eureka, and a cab-horse named Jim. They encounter vegetable people living under the world, and Dorothy is reunited with the Wizard of Oz when he floats down in his hot air balloon. They later are aided by invisible people in the Valley of Voe, and must escape several unfriendly mythical creatures to return to Oz. Baum’s vivid imagination and creativity are readily apparent in this adventurous work, for he combines wonderful characters with an entertaining plot in a land at once familiar and full of enigmatic possibility.

The train from ‘Frisco was very late. It should have arrived at Hugson’s siding at midnight, but it was already five o’clock and the gray dawn was breaking in the east when the little train slowly rumbled up to the open shed that served for the station-house. As it came to a stop the conductor called out in a loud voice:

At once a little girl rose from her seat and walked to the door of the car, carrying a wicker suit-case in one hand and a round bird-cage covered up with newspapers in the other, while a parasol was tucked under her arm. The conductor helped her off the car and then the engineer started his train again, so that it puffed and groaned and moved slowly away up the track. The reason he was so late was because all through the night there were times when the solid earth shook and trembled under him, and the engineer was afraid that at any moment the rails might spread apart and an accident happen to his passengers. So he moved the cars slowly and with caution.

The little girl stood still to watch until the train had disappeared around a curve; then she turned to see where she was.

The shed at Hugson’s Siding was bare save for an old wooden bench, and did not look very inviting. As she peered through the soft gray light not a house of any sort was visible near the station, nor was any person in sight; but after a while the child discovered a horse and buggy standing near a group of trees a short distance away. She walked toward it and found the horse tied to a tree and standing motionless, with its head hanging down almost to the ground. It was a big horse, tall and bony, with long legs and large knees and feet. She could count his ribs easily where they showed through the skin of his body, and his head was long and seemed altogether too big for him, as if it did not fit. His tail was short and scraggly, and his harness had been broken in many places and fastened together again with cords and bits of wire. The buggy seemed almost new, for it had a shiny top and side curtains. Getting around in front, so that she could look inside, the girl saw a boy curled up on the seat, fast asleep.

She set down the bird-cage and poked the boy with her parasol. Presently he woke up, rose to a sitting position and rubbed his eyes briskly.

“Yes,” she answered, looking gravely at his tousled hair and blinking gray eyes. “Have you come to take me to Hugson’s Ranch?”

He laughed at that, and his laugh was merry and frank. Jumping out of the buggy he put Dorothy’s suit-case under the seat and her bird-cage on the floor in front.

“Oh, no; it’s just Eureka, my kitten. I thought that was the best way to carry her.”

“Eureka’s a funny name for a cat,” he remarked.

“I named my kitten that because I found it,” she explained. “Uncle Henry says ‘Eureka’ means ‘I have found it.’”

She climbed into the buggy and he followed her. Then the boy picked up the reins, shook them, and said “Gid-dap!”

The horse did not stir. Dorothy thought he just wiggled one of his drooping ears, but that was all.

“Perhaps,” said Dorothy, “if you untied him, he would go.”

The boy laughed cheerfully and jumped out.

“Guess I’m half asleep yet,” he said, untying the horse. “But Jim knows his business all right–don’t you, Jim?” patting the long nose of the animal.

Then he got into the buggy again and took the reins, and the horse at once backed away from the tree, turned slowly around, and began to trot down the sandy road which was just visible in the dim light.

“Thought that train would never come,” observed the boy. “I’ve waited at that station for five hours.”

“We had a lot of earthquakes,” said Dorothy. “Didn’t you feel the ground shake?”

“Yes; but we’re used to such things in California,” he replied. “They don’t scare us much.”

“The conductor said it was the worst quake he ever knew.”

“Did he? Then it must have happened while I was asleep,” he said, thoughtfully.

“How is Uncle Henry?” she enquired, after a pause during which the horse continued to trot with long, regular strides.

“He’s pretty well. He and Uncle Hugson have been having a fine visit.”

“Is Mr. Hugson your uncle?” she asked.

“Yes. Uncle Bill Hugson married your Uncle Henry’s wife’s sister; so we must be second cousins,” said the boy, in an amused tone. “I work for Uncle Bill on his ranch, and he pays me six dollars a month and my board.”