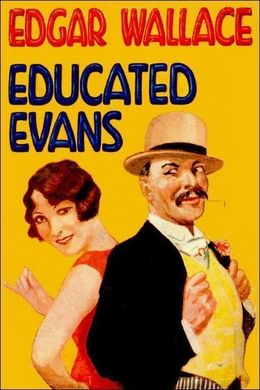 The Master of Mystery has become the Master of Mirth! In Educated Evans Edgar Wallace has forsaken the Realm of Crime for the Kingdom of Mirth! His story of Evans, the little cockney tipster, is full of amusing incidents of love and adventure set amidst the bustle and excitement of the racecourse. Edgar Wallace provides a thrill of another sort!

Inspector Pine was something more than an Inspector of Police. He was what is known in certain circles as a Christian man. He was a lay preacher, a temperance orator, a social reformer. And if any man had worked hard to bring Educated Evans to a sense of his errors, that man was Inspector Pine. He had wrestled with the devil in Mr. Evans’ spiritual make-up, he had prayed for Mr. Evans, and once, when things were going very badly, he had induced Mr. Evans to attend what was described as “a meeting of song and praise.”

Educated Evans respected the sincerity of one whom he regarded as his natural enemy, but discovering, as he did, that a “meeting of praise and song” brought him no financial advancement, he declined any further invitations and devoted his energies and excursions to picking up information about a certain horse that was running in a steeplechase at Kempton Park on Boxing Day.

Nevertheless, Inspector Pine did not despair. He believed in restoring a man’s self-respect and in re-establishing his confidence; but here he might have saved himself a lot of trouble, for the self-respect of Educated Evans was enormous, and he was never so confident as when, after joining in a hymn, two lines of which ran:

The powers of darkness put to flight, The day’s dawn triumphs over night,

he accepted the omen and sent out to all his punters “Daydawn–inspired information–help yourself.” For, amongst other occupations, Educated Evans was a tipster, and had a clientèle that included many publicans and the personnel of the Midland Railway Goods Yard.

One day in April, Educated Evans leant moodily over the broad parapet and examined the river with a vague interest. His melancholy face wore an expression of pain and disappointment, his under-lip was out-thrust in a pout, his round eyes stared with a certain urgent agony, as though he had given them the last chance of seeing what he wanted to see, and if they failed him now they would never again serve him.

So intent was he that one who, although a worker in another and, to Evans, a hateful sphere, bore many affectionate nicknames, was able to come alongside of him and share his contemplation without the sad man observing the fact.

Fussing little tugs, lethargic strings of barges, a police-boat slick and fast–all these came under the purview of Educated Evans, but apparently he saw nothing of what he wanted to see, and drew back with an impatient sigh.

Then it was that he saw his companion and realised that here, on the drab Embankment, was one whom he had imagined to be many miles away.

The new-comer was a tall man of thirty, broad-shouldered, power in every line of him. He was dressed in black, and a broad-rimmed felt hat was pulled over his eyes. He was chewing a straw, and even if Mr. Evans had failed to identify him by another means, he would have known “The Miller”–whose other name was William Arbuthnot Challoner–by this sign.

“Why, ‘Miller,’ I thought you was dead! And here was I speculatin’ upon the one hundred and ninety million cubic yards of water that passes under that bridge every day, and meditatin’ upon the remarkable changes that have happened since dear old Christopher Columbus sailed from that very pier, him and the Pilgrim Fathers that discovered America in Fifteen Seven Nine—-“

“The Miller” listened and yet did not listen. The straw twirled between his strong teeth; his long, saturnine face was turned to the river; his thoughts were far away.

“Whistler, of course–dear me, where’s my education!” Mr. Evans rolled his head in self-impatience. “Whistler. What a artist. ‘Miller’–if you’ll excuse the familiarity. I’ll call you Challoner if you’re in any way offended. What–a–artist! There is a bit of painting of his in the National Gall’ry. And another one in the–the Praydo in Madrid. Art’s a perfect weakness with me–always has been since a boy. Do you know Sergeant? Great American painter. One of the greatest artists in the world. An’ do you know the celebrated French artist, Carrot?”

“Do you know,” began “The Miller,” speaking deliberately, and looking at the river all the time, “do you know where you were between 7.30 p.m. and 9.15 p.m. on the night of the eighth of this month?”

“I do,” said Educated Evans promptly.

“Does anybody else know–anybody whose word would be accepted by a police magistrate gifted with imagination and a profound distrust of the criminal classes?”

“My friend, Mr. Harry Sefferal,” began Evans, and “The Miller” laughed hollowly and with an appearance of pain.