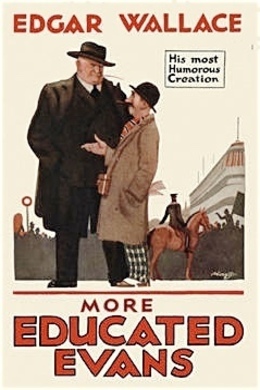 The further escapades of the incorrigible Evans, Edgar Wallace’s Cockney hero of the Turf feature in these twelve tales. There are bets, bookmakers, horses, tip-offs, winners, journalists and women. There is banter, humour and much fun to be had along the way.

It is an axiom of life that the course of true love never ran smoothly. There were certainly snags in the current of Mr. Cris Holborn’s affair, but the largest and most considerable of these was Florrie Beaches’ mamma, who was stout and snacky. She snacked Mr. Holborn about his profession (she herself being a lady of property and owning the house in Mornington Crescent); she snacked him about his gentlemanliness; she snacked him on the question of stable odours (she invariably held a handkerchief to her bulbous nose when he came into her drawing-room) and she snacked him about his education.

Sometimes, in desperation, Mr. Holborn snacked back. He told her that he was one of the best known trainers of racehorses in England, but he was “Cris” to scores of the gentry and nobility, and that if a farmer’s son was not good enough for the daughter of a retired publican, well, he’d like to know who was?

It may be said in passing that Mr. Beaches had not only retired from The Trade, but he had also retired from earth, and at the moment was resting at Kensal Rise under a huge slab of Aberdeen granite, on which was carved a tissue of falsehoods concerning his virtues as a father and husband and his great loss to the world.

And in a sense Cris Holborn’s retort was justifiable. He was one of the best known trainers in England and one of the cleverest. In the language of the crude men who support the art and practice of horse-racing, he was “hot,” and when his horses won, he won alone: sometimes not even the owner of the horse was aware of the forthcoming jubilations.

On a night in February, Mrs. Beaches snacked to such purpose, and was supported so effectively by her charming daughter, that things happened in Mornington Crescent. Neighbours heard the sound of shrill and angry voices, a door slammed violently, and there was the sound of breaking glass….

Peace reigned in Selbany Street Police Station. The station sergeant nodded over his book, the policeman on duty at the door yawned frequently and wondered if the clock over Disreili’s, the High Class Jewellers, had stopped.

The hour was 1 a.m., and it was raining greasily as it can only rain in Somers Town. It had been a dull night, being Thursday, when men go soberly to their homes and play draughts with their children and win–if the children have any discretion. A night when the picture houses are half empty, and the bung at the Rose and Cabbage leant his bloated hands on the zinc counter and severely condemned socialism to an empty saloon.

There were only three men and one perfect lady in the cells at the back of the station: crime for the moment was unpopular.

Sergeant Arbuthnot Challoner, whom men called The Miller because he chewed straws, came in hastily out of the darkness, put his reeking umbrella in one corner of the hall and hung his shining mackintosh on a peg.

“Yes,” he said sardonically, in reply to the grey-haired station sergeant, “it is a nice night!”

The clock ticked solemnly and noisily.

“Nothing,” said The Miller shortly. He had been standing for two hours in the rain waiting for a motor-car thief who was expected to retrieve the car he had garaged.

At that moment, when the night seemed as barren of promise as the pages of Dr. Stott’s sermons, a car drew up opposite the station entrance and there sailed into the charge room Miss Florrie Beaches and her ma. Miss Beaches was golden-haired and blue-eyed. She wore an evening dress of gold and crimson and a theatre wrap of blue and white. She had orchids at her waist and about her neck a choker of imitation pearls the size of pigeons’ eggs. Her ma was more soberly arrayed in black with glittering jet ornaments.

“Is this the police court?” asked Miss Beaches with a certain ferocity.

“It is the police station,” said The Miller.

Florrie closed her eyes and nodded.

“That will do,” she said quietly. “I wish to have a summons against Mr. Cris Holborn for insulting my dear mother and breach of promise, though I wouldn’t marry the dirty dog not if he went down on his bare knees to me! He’s a low type and if my poor dear father had been alive he’d have bashed his face in!”

“He would indeed,” murmured Mrs. Beaches.

The Miller would have explained, but—-

“When a lady lowers herself to be seen out with a common horse trainer,” Miss Beaches went on rapidly, “when she does everything for a man as I’ve done, introducing him into society so to speak, and when he didn’t know what a fish knife was till me dear mother taught him, it’s hard to hear your dear mother called an interfering hag.”

“I’m coming to that, ma. Also I wish to charge him with breaking two panes of glass in our front door by his violent temper. I’m going to show this man up! Him and his lords that he knows!”