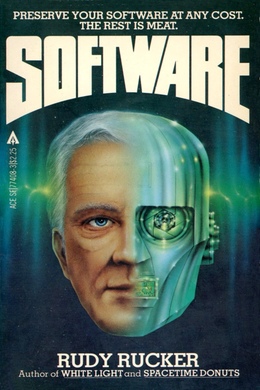 Cobb Anderson created the ‘boppers,’ sentient robots that overthrew their human overlords. But now Cobb is just an aging alcoholic waiting to die, and the big boppers are threatening to absorb all of the little boppers–and eventually every human–into a giant, melded consciousness. Some of the little boppers aren’t too keen on the idea, and a full-scale robot revolt is underway on the moon (where the boppers live). Meanwhile, bopper Ralph Numbers wants to give Cobb immortality by letting a big bopper slice up his brain and tape his ‘software.’ It seems like a good idea to Cobb.

Cobb Anderson would have held out longer, but you don’t see dolphins every day. There were twenty of them, fifty, rolling in the little gray waves, wicketting up out of the water. It was good to see them. Cobb took it for a sign and went out for his evening sherry an hour early.

The screen door slapped shut behind him and he stood uncertainly for a moment, dazed by the late afternoon sun. Annie Cushing watched him from her window in the cottage next door. Beatles music drifted out past her.

“You forgot your hat,” she advised. He was still a good-looking man, barrel-chested and bearded like Santa Claus. She wouldn’t have minded getting it on with him, if he weren’t so…

Annie went back to brushing her hair. She wore it white and long, and she kept it thick with hormone spray. She was sixty and not too brittle to hug. She wondered idly if Cobb would take her to the Golden Prom next Friday.

The long last chord of “Day in the Life” hung in the air. Annie couldn’t have said which song she had just heard–after fifty years her responses to the music were all but extinguished–but she walked across the room to turn the stack of records over. If only something would happen, she thought for the thousandth time. I get so tired of being me.

At the Superette, Cobb selected a chilled quart of cheap sherry and a damp paper bag of boiled peanuts. And he wanted something to look at.

The Superette magazine selection was nothing compared to what you could get over in Cocoa. Cobb settled finally for a love-ad newspaper called Kiss and Tell. It was always good and weird…most of the advertisers were seventy-year-old hippies like himself. He folded the first-page picture under so that only the headline showed. PLEASE PHEEZE ME.

Funny how long you can laugh at the same jokes, Cobb thought, waiting to pay. Sex seemed odder all the time. He noticed the man in front of him, wearing a light-blue hat blocked from plastic mesh.

If Cobb concentrated on the hat he saw an irregular blue cylinder. But if he let himself look through the holes in the mesh he could see the meek curve of the bald head underneath. Skinny neck and a light-bulb head, clawing in his change. A friend.

Farker finished rounding up his nickels, then turned his body around. He spotted the bottle.

“Seven eighty-five,” the cashier said to Cobb. Her white hair was curled and hennaed. She had a deep tan. Her flesh had a pleasingly used and oily look to it.

Cobb was surprised. He’d already counted money into his hand. “I make it six fifty.” Numbers began sliding around in his head.

“I meant my box number,” the cashier said with a toss of her head. “In the Kiss and Tell.” She smiled coyly and took Cobb’s money. She was proud of her ad this month. She’d gone to a studio for the picture.

Farker handed the paper back to Cobb outside. “I can’t look at this, Cobb. I’m still a happily married man, God help me.”

“You want a peanut?”

“Thanks.” Farker extracted a soggy shell from the little bag. There was no way his spotted and trembling old hands could have peeled the nut, so he popped it whole into his mouth. After a minute he spit the hull out.

They walked towards the beach, eating pasty peanuts. They wore no shirts, only shorts and sandals. The afternoon sun beat pleasantly on their backs. A silent Mr. Frostee truck cruised past.

Cobb cracked the screw-top on his dark-brown bottle and took a tentative first sip. He wished he could remember the box number the cashier had just told him. Numbers wouldn’t stay still for him anymore. It was hard to believe he’d ever been a cybernetician. His memory ranged back to his first robots and how they’d learned to bop…

“Food drop’s late again,” Farker was saying. “And I hear there’s a new murder cult up in Daytona. They’re called the Little Kidders.” He wondered if Cobb could hear him. Cobb was just standing there with empty colorless eyes, a yellow stain of sherry on the dense white hair around his lips.

“Food drop,” Cobb said, suddenly coming back. He had a way of re-entering a conversation by confidently booming out the last phrase which had registered. “I’ve still got a good supply.”

“But be sure to eat some of the new food when it comes,” Farker cautioned. “For the vaccines. I’ll tell Annie to remind you.”

“Why is everybody so interested in staying alive? I left my wife and came down here to drink and die in peace. She can’t wait for me to kick off. So why…” Cobb’s voice caught. The fact of the matter was that he was terrified of death. He took a quick, medicinal slug of sherry.