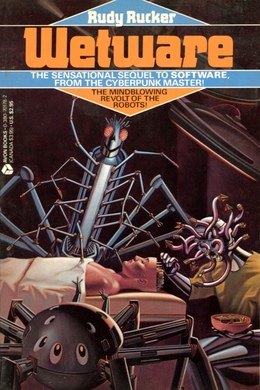 In 2030, bopper robots in their lunar refuge have founds a way to infuse DNA wetware with their own software code. The result is a new lifeform: the meatbop. Fair is fair, after all. Humans built the boppers, now bops are building humans. . .sort of. Its all part of an insidious plot thats about to ensnare Della Taze–who doesnt think she killed her lover while in drug-induced ecstasy. . .but isnt sure. And its certainly catastrophic enough to call Cobb Anderson–the pheezer who started it all–out of cold-storage heaven.

It was the day after Christmas, and Stahn was plugged in. With no work in sight, it seemed like the best way to pass the time…other than drugs, and Stahn was off drugs for good, or so he said. The twist-box took his sensory input, jazzed it, and passed it on to his cortex. A pure software high, with no somatic aftereffects. Staring out the window was almost interesting. The maggies left jagged trails, and the people looked like actors. Probably at least one of them was a meatie. Those boppers just wouldn’t let up. Time kept passing, slow and fast.

At some point the vizzy was buzzing. Stahn cut off the twist-box and thumbed on the screen. The caller’s head appeared, a skinny yellow head with a down-turned mouth. There was something strangely soft about his features.

“Stahn Mooney of Mooney Search. What can I do for you, Mr. Yukawa?”

“It concerns a missing person. Can you come to my office?”

Yukawa twitched, and the vizzyprint spat out a sheet with printed directions. His address and the code to his door-plate. Stahn thumbed off , and after a while he hit the street.

Bad air out there, always bad air–yarty was the word for it this year. 2030. Yart = yawn + fart. Like in a library, right? Sebum everywhere. Sebum = oily secretion which human skin exudes. Yarts and sebum, and a hard vacuum outside the doooooooommmme. Dome air–after the invasion, the humans had put like a big airtight dome over Disky and changed the town’s name to Einstein. The old Saigon into Ho Chi Minh City routine. The boppers had been driven under the Moon’s surface, but they had bombs hidden all over Einstein, and they set off one a week maybe, which was not all that often, but often enough to matter for sure for sure. And of course there were the meaties–people run by remote bopper control. What you did was to hope it didn’t get worse.

So OK, Stahn is standing out in the street waiting for a slot on the people-mover. A moving sidewalk with chairs, right. He felt like dying, he really really felt like dying. Bad memories, bad chemistry, no woman, bad life.

The comment was right on the beam. It took a second to realize that someone was talking to him. A rangy, strung-out dog of a guy, shirtless in jeans with blond hair worn ridgeback style. His hair was greased up into a longitudinal peak, and there were extra hairgrafts that ran the hairstrip right on down his spine to his ass. Seeing him made Stahn feel old. I used to be different, but now I’m the same. The ridgeback had a handful of pamphlets, and he was staring at Stahn like one of them was something in a zoo.

“No thanks,” Stahn said, looking away. “I just want to catch a slot.”

“Inside your lamejoke private eye fantasy? Be here now, bro. Merge into the One.” The kid was handsome in an unformed way, but his skin seemed unnaturally slack. Stahn had the impression he was stoned.

Stahn frowned and shook his head again. The ridgeback gave him a flimsy plas pamphlet, tapped his own head, and then tapped Stahn’s head as if to mime the flow of knowledge. Poor dumb freak. Just then an empty slot came by. Safely off the sidewalk, Stahn looked the leaflet over. OR-MY IS THE WAY, it read. ALL IS ONE!

The text said that sharing love with one’s fellows could lead to a fuller union with the cosmos at large. At the deepest level, the pamphlet informed Stahn, all people are aspects of the same archetype. Those who wished to learn more about Organic Mysticism were urged to visit the Church offices on the sixth floor of the ISDN ziggurat. All this wisdom came courtesy of Bei Ng, whose picture and biography appeared on the pamphlet’s back cover. A skinny yellow guy with wrinkles and a pointed head. He looked like a big reefer. Even after eighteen clean months, lots of things still made Stahn think of drugs.

The Einstein cityscape drifted past. Big, the place was big–like Manhattan, say, or half of D.C. Not to mention all the chambers and tunnels underground. Anthill. Smart robots had built the city, and then the humans had kicked them out. The boppers. They were easy to kill, once you knew how. Carbon-dioxide laser, EM energy, scramble their circuits. They’d gone way underground. Stahn had mixed feelings about boppers. He liked them because they were even less like regular people than he was.

At one point he’d even hung out with them a little. But then they’d killed his father…back in 2020. Poor old dad. All the trouble Stahn had given him, and now it felt like he was turning into him, year by year. Mooney Search. Wave on it, sister, wiggle. Can I get some head?