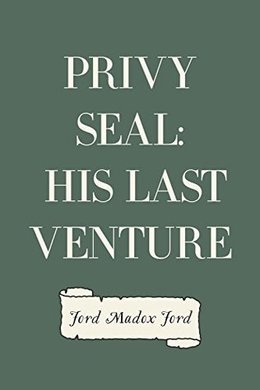 The tumultuous relationship between Katharine Howard and England’s King Henry VIII was inextricably entwined with the rise to power and eventual fall of Thomas Cromwell, who served as the Lord Privy Seal. In this fictionalized account from Ford Madox Ford, the once-innocent Katharine begins to be swept up in the machinations of Henry VIII’s court, causing many unforeseen alliances, betrayals, and complications.

The Magister Udal sat in the room of his inn in Paris, where customarily the King of France lodged such envoys as came at his expense. He had been sent there to Latinise the letters that passed between Sir Thomas Wyatt and the King’s Ministers of France, for he was esteemed the most learned man in these islands. He had groaned much at being sent there, for he must leave in England so many loves—the great, blonde Margot Poins, that was maid to Katharine Howard; the tall, swaying Katharine Howard herself; Judge Cantre’s wife that had fed him well; and two other women, with all of whom he had succeeded easily or succeeded in no wise at all. But the mission was so well paid—with as many crowns the day as he had had groats for teaching the Lady Mary of England—that fain he had been to go. Moreover, it was by way of being a favour of Privy Seal’s. The magister had written for him a play in English; the rich post was the reward—and it was an ill thing, a thing the magister dreaded, to refuse the favours of Privy Seal. He consoled himself with the thought that the writing of letters in Latin might wash from his mouth the savour of the play he had written in the vulgar tongue.

But his work in Paris was ended—for with the flight of Cardinal Pole, who had left Paris precipitately upon news that the King of England had sent a drunken roisterer to assassinate him, it was imagined that soon now more concord between Francis and England might ensue, and the magister sat in his room planning his voyage back to Dover. The room was great in size, panelled mostly in wood, lit with lampwicks that floated in oil dishes and heated with a sea-coal fire, for though it was April the magister was of a cold disposition of the hands and shins. The inn—of the Golden Astrolabe—was kept by an Englishwoman, a masterful widow with a broad face and a great mouth that smiled. She stood beside him there. Forty-seven she might have been, and she called herself the Widow Annot.

The magister sat over his fire with his gown parted from his legs to warm his shins, but his hands waved angrily and his face was crestfallen.

‘Oh, keeper of a tavern,’ he said. ‘It is set down in holy writ that it is not good for a man to be alone.’

‘That a hostess shall keep her tavern clean is writ in the books of the provost of Paris town,’ the Widow Annot answered, and the shadow of her great white hood, which she wore in the older English fashion, danced over the brown wooden beams of the ceiling.

‘Nay, nay,’ he answered, ‘it is written there that it is the enjoined devoir of every hotelier to provide things fitting for the sojourners’ ease, pleasure and recreation.’

‘The maid is locked in another house,’ the hostess answered, ‘and should have been this three week.’ She swung her keys on a black riband and gazed at him masterfully. ‘Will your magistership eat capon or young goat?’

‘Capon will have a savour like sawdust, and young goat like the dust of the road,’ the magister moaned. ‘Give me the girl to wait upon me again.’

‘No maid will wait upon thee,’ she answered.

‘Even thou thyself?’ he asked. He glanced across his shoulder and his eyes measured her, hers him. She had large shoulders, a high, full stomacher, and her cheeks were an apple-red. ‘The maiden was a fair piece,’ he tittered.

‘Therefore you must spoil the ring of the coin,’ she answered.

He sighed: ‘Then eat you with me. “Soli cantare periti Arcades.” But it is cold here alone of nights.’

They ate goat and green leeks sweetened with honey, and wood thrushes pickled in wine, and salt fish from the mouth of the Beauce. And because this gave the magister a great thirst he drank much of a warmed wine from Burgundy that the hostess brought herself. They sat, byside, on cushions on a couch before the warm fire.

‘Filia pulchra mater pulchrior!’ the magister muttered, and he cast his arms about her soft and plump waist. ‘The maid was a fair skewer, the hostess is a plumper roasting bit.’ She took his kisses on her fire-warmed cheeks, but in the end she thrust him mightily from her with a large elbow.

He gasped with the strength of her thrust, and she said:

‘Greedy dogs getten them hard cuffs,’ and rearranged her neckercher. When he tried to come nearer her she laughed and thrust him aback.

‘You have tried and tasted,’ she said. ‘A fuller meal you must pay for.’

He stood before her, lean and lank, his gown flapping about his calves, his eyes smiling humorously, his lips twitching.