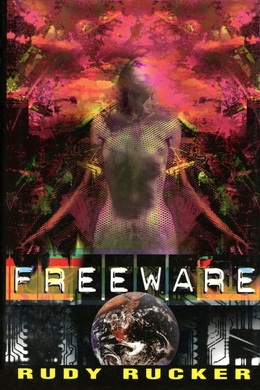 Now, in 2053, ‘moldies’ are the latest robotic advancement–evolved artificial lifeforms made of soft plastic and gene-tweaked molds and algae, so anatomically inventive and universally despised that their very presence on the planet has thrown the entire low-rent future into a serious tailspin. So the moon is the place to be, if you’re a persecuted ‘moldie’ or an enlightened ‘flesher’ intent an creating a new, more utopian hybrid civilization. Of course up there, there are other intergalactic intelligences to contend with–and some not so intelligent–who have their own agendas and appetites.

Monique was a moldie: an artificial life form made of a soft plastic that was mottled and veined with gene-tweaked molds and algae. Although Monique was a being with superhuman powers, she was working as maid, handyman, and bookkeeper for the Clearlight Terrace Court Motel in Santa Cruz, California. The motel manager, young Terri Percesepe, occasionally worried about Monique’s motives. But the moldie’s work was affordable and excellent.

The Clearlight was situated near the top of a small hill, fifty yards back from the Santa Cruz beach with its Boardwalk amusement park. It was a fine fall day, October 30, 2053, and the morning sun filled the town with a dancing preternatural light that made the air itself seem jellied and alive. On the ocean, long smooth waves were rolling in, each wave breaking with a luscious drawn-out crunch.

The motel consisted of a wooden office and three terraced rows of connected stucco rooms, each room with a double sliding glass door looking out over the sea. Pasted onto part of each room’s door was a translucent psychedelic sticker mimicking an arabesque tiling. The weathered motel office sat on a flat spot behind the highest terrace. The back part of the office held a four-room apartment in which Terri lived with her husband Tre Dietz and their two children: four-year-old Dolf and one-year-old Baby Wren.

Monique was making her way from room to room, changing the sheets and towels, enjoying the feel of the bright sun slanting down on her and on the faded blue walls of the motel buildings. She’d already finished the rooms in the two upper rows and was now busy with the rooms of the lowest terrace, which sat directly above the well-worn shops of Beach Street. It was almost time for Monique’s midday break; as soon as her husband Xlotl called up, she’d go down for an hour on the beach with him.

Monique looked like a woman, sort of, most of the time, which is why it was customary to refer to her as a she. Moldies picked a gender at birth and stuck to it throughout the few years that they lived. Though arbitrarily determined, a moldie’s sex was a very real concept to other moldies.

Each moldie was passionately interested in mating and reproducing at least once before his or her short life should expire. The moldies reproduced in pairs and lived in nests that were like extended families. Monique was in a nest of six: herself, her parents Andrea and Everooze, her husband Xlotl, her brother Xanana, and Xanana’s wife Ouish.

Monique’s mother Andrea was very strange. Sometimes, under the influence of certain chelated rare-earth polymers, she would form her body into a giant replica of the Koran or of the Book of Mormon and lie out in front of the beachfront Boardwalk amusement park, babbling about transfinite levels of heaven, chaotic feedback, and the angels Izra’il and Moroni. Her body was more mold than plastic, and it looked like she might fall apart anytime now, but Andrea had gotten rejuvenation treatments for herself before, and she planned to do it again–if she could get the money.

Monique’s father Everooze worked as a liveboard for Terri Percesepe’s kid brother Ike, who ran a surf shop called Dada Kine out at Pleasure Point in south Santa Cruz. Like Andrea, Everooze was quite old for a moldie and had been rejuvenated several times. Ike had been going out surfing with Everooze every day for the last few years, and occasionally Ike might lend or rent Everooze to friends or to stuzzy big-time surfers. For his own part, Everooze got a kick out of giving free lessons to beginners and spreading the gospel of surf. Like Andrea, Everooze was starting to flake pretty badly. Without a retrofit he’d die this winter. But Ike worshipped Everooze and was prepared to pay for his rejuvenation.

When Terri had heard about Monique’s birth to Everooze and Andrea– last August–she’d thought of hiring the newborn moldie right away, and she’d been able to convince Andrea and Everooze that it was a floatin’ idea.

Monique quickly learned the ins and outs of running the Clearlight, and her diligent efforts left Terri and Tre plenty of free time. Not only did Monique make up the rooms quickly and beautifully, she managed all of the motel’s books. Terri went out surfing most every day, and Tre liked to sit in an easy chair behind the motel office desk, whiling away the hours smoking pot while wearing an uvvy on his neck and doing complicated things with his brain. Although most people thought of an uvvy as a communication device, you could also use it as a computer terminal, which was something Tre did a lot. “Uvvy” was pronounced soft and cozy, like “lovey-dovey.”