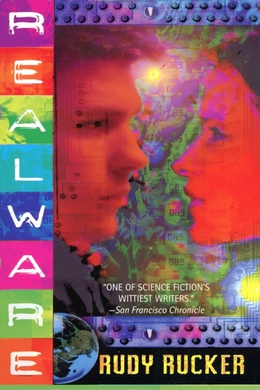 It’s 2054, and Phil Gottner doesn’t know where his life is. His girlfriend is hooked on merge, a drug used in ‘bacteria-style’ sex. His father has just been swallowed by a hyperspatial anomaly that materialized from a piece of art designed to project images of four-dimensional objects into three-dimensional space. Then, at the funeral, Phil meets and falls in love with Yoke Starr-Mydol, a young lovely visiting from the Moon.

Spuring Phil’s advances, Yoke flies to the Polynesian island of Tonga, where she discovers an alien presence at the bottome of the sea. Calling themselves Metamartians, the aliens offer Yoke an alla,a handheld device that gives its owner the power of mind over matter—which, it turns out, is pretty much like having a magic wand.

But as Phil pursues Yoke, and the altruistic Metamartians distribute more allas, he begins to suspect that his father’s disappearance and presumed death are linked to the aliens and their miraculous gift. For it seems that the allas are accompanied by a fourth-dimensional entity known as Om, a godlike being who’s taken a special interest in humans. Now Phil and Yoke must solve the mystery of the Metamartians and their god, before humanity uses its newfound powers to destroy itself altogether.

“Wake up, Phil. It’s your sister on the uvvy. Something’s happened.” Kevvie’s breath was alkaloidal and bitter in the dawn.

Phil woke slowly. He liked to take the time to think about his dreams before they evanesced. Just now he’d been dreaming about hiking again. For some reason, he always dreamed about the same three or four places, and one of the places was an imaginary range of mountains, an arc of icy little peaks that were somehow very–domesticated. Easy to climb.

“Wake up!” repeated Kevvie. Her voice was, as usual, flat and practical, though now a bit louder than before. As Phil’s eyes fluttered open an interesting thought occurred to him: maybe the mountains were his teeth. Sleepily he started to tell Kevvie his idea.

“My teeth are the mountains that–”

But she wasn’t listening. Her blue eyes were intent, her fox-face was pinched with urgency. “You talk to Jane right now,” she said, plopping the little uvvy onto the pillow next to Phil. The uvvy was displaying a tiny holographic image of Phil’s sister.

Calm, practical Jane. But today Jane wasn’t calm. Her eyes were red and wet with tears.

“Da’s dead,” quavered Jane. “It’s horrible. A wowo got him? Willow says they were in bed and all of a sudden their wowo got really big, all bright and swirly, and it jumped inside of Da and the light was shining out of his eyes like searchlights and he was yelling and then his body collapsed and the wowo sucked him inside and crushed him. Da’s gone! Willow’s covered with his blood. It’s so gnarly?” Jane’s voice twisted up an octave on the last word and she began sobbing. “I can’t believe it. Wowos are just a toy. Da and Tre made them up.”

“Just now. From the car. She’s scared the wowo might get her next. She left the house to go to the rent-a-cops. The popos. She told me to tell you and for you to call her. I’m flying out. You pick me up.”

“Wait, wait, this is all too–” Phil broke off in confusion. Kevvie, who’d been avidly eavesdropping, smiled and offered him a piece of her chewing gum. Phil shook his head no. Kevvie tended never to have the correct emotional response. In company, she had to look at other people so she’d know when to laugh.

“What are you going to do?” demanded Jane’s little face. Her pointy chin was trembling.

“I’ll call Willow, then I’ll drive Kevvie’s car down to Palo Alto, and then I’ll call you back. And yeah, I can pick you up. But–are you sure Da’s really dead? From a wowo? It’s just a fancy hollow graphic that Da made up a story about! Wowos are math and bullshit!”

“Willow said the wowo pulled Da in like it was–a garbage disposal. She said that. She’s hysterical. She shouldn’t be driving.”

“I love you too, Phil. Be strong. I’ll see you tonight. I’m going to the airport right now.”

Phil clicked off the uvvy and the room was quiet. His eyes felt so strange–bulging and puffy and aching. They wanted to cry, but for now they were dry. He imagined a wowo in his father’s head. Light streaming out of his father’s eye-sockets.

“Oh, poor Phil,” said Kevvie. “It’s terrible to lose your father. I want you to know that I’m here for you. But what was that about a wowo? That hologram thingie? Willow says that’s what killed your father? A ball of colored light? The real cops aren’t going to buy it. She should get a top attorney right away!”

“That’s too–” Phil began, but broke off with a vague gesture. In his mind the full sentence was, “That’s too stupid and cold of you to deserve an answer,” but he didn’t have the heart to start a fight. Kevvie’s inability to visualize other people’s feelings was so extreme that Phil had come to think of it as a clinical psychiatric condition. Indeed, Kevvie habitually chewed a popular empathy-enhancement gum in a perhaps unconscious effort to try and correct her deficit. “E-gum makes you part-of,” as the chanted commercials had it. But it seemed like the only person that e-gum made Kevvie more sensitive to was Kevvie. All these angry thoughts went racing through Phil’s head as he made the little gesture. He reminded himself that he liked Kevvie. His father’s death was filling him with irrational rage.

Da dead. Phil groaned and got out of bed, sliding the groan down into a keening moan. This hurt so much that he needed to keep making noise.