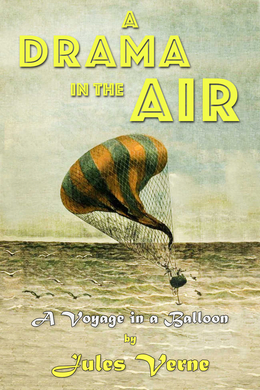 A Drama in the Air

Science for families: A Voyage in a Balloon

Amalgamating futuristic technologies and expeditions into the future, this is a scintillating collection by Verne. This short work combines sights of the future as well as bird’s eye view of the contemporary era.

Just as the narrator starts the ascent of his balloon, a stranger jumps into its car. The unexpected passenger’s only intent is to take the balloon as high as it will go, even at the cost of his and pilot’s life. The intruder takes advantage of the long journey to recount the history of incidents related to the epic of lighter-than-air travel. This short story foreshadows Verne’s first novel, Five Weeks in a Balloon.

In the month of September, 1850, I arrived at Frankfort-on-the-Maine. My passage through the principal cities of Germany, had been brilliantly marked by aerostatic ascensions; but, up to this day, no inhabitant of the Confederation had accompanied me, and the successful experiments at Paris of Messrs. Green, Godard, and Poitevin, had failed to induce the grave Germans to attempt aerial voyages.

Meanwhile, hardly had the news of my approaching ascension circulated throughout Frankfort, than three persons of note asked the favour of accompanying me. Two days after, we were to ascend from the Place de la Comédie. I immediately occupied myself with the preparations. My balloon, of gigantic proportions, was of silk, coated with gutta percha, a substance not liable to injury from acids or gas, and of absolute impermeability. Some trifling rents were mended: the inevitable results of perilous descents.

The day of our ascension was that of the great fair of September, which attracts all the world to Frankfort. The apparatus for filling was composed of six hogsheads arranged around a large vat, hermetically sealed. The hydrogen gas, evolved by the contact of water with iron and sulphuric acid, passed from the first reservoirs to the second, and thence into the immense globe, which was thus gradually inflated. These preparations occupied all the morning, and about 11 o’clock, the balloon was three-quarters full; sufficiently so;–for as we rise, the atmospheric layers diminish in density, and the gas, confined within the aerostat, acquiring more elasticity, might otherwise burst its envelope. My calculations had furnished me with the exact measurement of gas required to carry my companions and myself to a considerable height.

We were to ascend at noon. It was truly a magnificent spectacle, that of the impatient crowd who thronged around the reserved enclosure, inundated the entire square and adjoining streets, and covered the neighbouring houses from the basements to the slated roofs. The high winds of past days had lulled, and an overpowering heat was radiating from an unclouded sky; not a breath animated the atmosphere. In such weather, one might descend in the very spot he had left.

I carried three hundred pounds of ballast, in bags; the car, perfectly round, four feet in diameter, and three feet in height, was conveniently attached; the cord which sustained it was symmetrically extended from the upper hemisphere of the aerostat; the compass was in its place, the barometer suspended to the iron hoop which surrounded the supporting cord, at a distance of eight feet above the car; the anchor carefully prepared;–all was in readiness for our departure.

Among the persons who crowded around the enclosure, I remarked a young man with pale face and agitated features. I was struck with his appearance. He had been an assiduous spectator of my ascensions in several cities of Germany. His uneasy air and his extraordinary pre-occupation never left him; he eagerly contemplated the curious machine, which rested motionless at a few feet from the ground, and remained silent.

The clock struck twelve! This was the hour. My compagnons du voyage had not appeared. I sent to the dwelling of each, and learned that one had started for Hamburg, another for Vienna and the third, still more fearful, for London. Their hearts had failed them at the moment of undertaking one of those excursions, which, since the ingenious experiments of aeronauts, are deprived of all danger. As they made, as it were a part of the programme of the fête, they had feared being compelled to fulfil their agreements, and had fled at the moment of ascension. Their courage had been in inverse ratio to the square of their swiftness in retreat.

The crowd, thus partly disappointed, were shouting with anger and impatience. I did not hesitate to ascend alone. To re-establish the equilibrium between the specific gravity of the balloon and the weight to be raised, I substituted other bags of sand for my expected companions and entered the car. The twelve men who were holding the aerostat by twelve cords fastened to the equatorial circle, let them slip between their fingers; the car rose a few feet above the ground. There was not a breath of wind, and the atmosphere, heavy as lead, seemed insurmountable.

“All is ready!” exclaimed I; “attention!”

The men arranged themselves; a last glance informed me that everything was right.

There was some movement in the crowd which seemed to be invading the reserved enclosure.

The balloon slowly ascended; but I experienced a shock which threw me to the bottom of the car. When I rose, I found myself face to face with an unexpected voyager,–the pale young man.