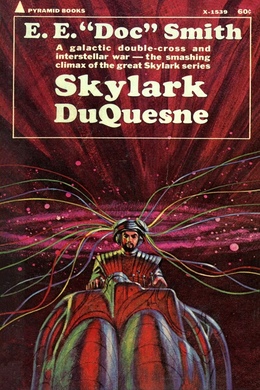 Scientists Dick Seaton and Marc DuQuesne were the deadliest enemies in the galaxy and their feud had blazed among the stars and challenged the history of a thousand planets. But now a threat from outside the galaxy drove them into a desperate alliance as hordes of strange aliens stormed through space on a collision course with Man. Seaton and DuQuesne fought side by side to fend off the invasion - as Seaton kept constant, perilous watch for DuQuesne’s inevitable double-cross.

Appearances are deceiving. A polished chunk of metal that shines like a Christmas-tree ornament may hold–and release–energy to destroy a city. A seed is quite another order of being to the murderous majesty of a toppling tree. A match flame can become a holocaust.

And the chain of events that can unseat the rulers of galaxies can begin in a cozy living room, before a hearth….

Outwardly, the comfortable (if somewhat splendidly furnished) living room of the home of the Richard Ballinger Seatons of Earth presented a peaceful scene. Peaceful? It was sheerly pastoral! Seaton and Dorothy, his spectacularly auburn-haired wife, sat on a davenport, holding hands. A fire of pine logs burned slowly, crackling occasionally and sending sparks against the fine bronze screen of the fireplace. Richard Ballinger Seaton Junior lay on the rug, trying doggedly, silently, and manfully, if unsuccessfully, to wriggle toward those entrancing flames.

Inwardly, however, it was very much otherwise. Dorothy’s normally pleasant–as well as beautiful–face wore a veritable scowl.

The dinner they had just eaten had been over two hours late; wherefore not one single item of it had been fit to feed to a pig. Furthermore, and worse, Dick was not relaxed and was not paying any attention to her at all. He was still wound up tight; was still concentrating on the multitude of messages driving into his brain through the button in his left ear–messages of such urgency of drive that she herself could actually read them, even though she was wearing no apparatus whatever.

She reached up, twitched the button out of his ear, and tossed it onto a table. “Will you please lay off of that stuff for a minute, Dick?” she demanded. “I’m fed up to the eyeballs with this business of you killing yourself with all time work and no time sleep. You never had any such horrible black circles under your eyes before and you’re getting positively scrawny. You’ve got to quit it. Can’t you let somebody else carry some of the load? Delegate some authority?”

“I’m delegating all I possibly can already, Red-Top.” Seaton absently rubbed his ear. Until Dorothy had flipped it away, the button had been carrying to him a transcription of the taped reports of more than one hundred Planetary Observers from the planet of Norlamin, each with the IQ of an Einstein and the sagacity of an owl. The last report had had to do with plentiful supplies of X metal that had been turned up on a planet of Omicron Eridani, and the decision to dispatch a fleet of cargo-carrying ships to fetch them away.

But he admitted grudgingly to himself that that particular decision had already been made. His wife was a nearer problem. Paying full attention to her now, he put his arm around her and squeezed.

“Converting a whole planet practically all at once to use fourth-, fifth-, and sixth-order stuff is a job of work, believe me. It’s all so new and so tough that not too many people can handle any part of it. It takes brains. And what makes it extra tough is that altogether too many people who are smart enough to learn it are crooks. Shysters–hoodlers–sticky-fingers generally. But I think we’re just about over the hump. I wouldn’t wonder if these Norlaminian ‘Observers’–snoopers, really–from the Country of Youth will turn out to be the answer to prayer.”

“They’d better,” she said, darkly. “At least, something had better.”

“Besides, if you think I look like the wrath of God, take a good look at Mart sometime. He’s having more grief than I am.”

“I already have; he looks like a refugee from a concentration camp. Peggy was screaming about it this morning, and we’re both going to just simply…”

What the girls intended to do was not revealed, for at that moment there appeared in the air before them the projected simulacra of eight green-skinned, more-or-less-human men; the men with whom they had worked so long; the ablest thinkers of the Central System.

There was majestic Fodan, the Chief of the Five of Norlamin; there was white-bearded Orion, the First of Astronomy; Rovol, the First of Rays; Astron, the First of Energy; Drasnik, the First of Psychology; Satrazon and Caslor, the Firsts of Chemistry and of Mechanism, respectively; and–in some ways not the least–there was that powerhouse of thought, Sacner Carfon the two thousand three hundred forty-sixth: the hairless, almost porpoise-like Chief of the Council of the watery planet Dasor. They were not present in the flesh. But their energy projections were as seemingly solid as Seaton’s own tall, lean body.

“We come, Overlord of the System, upon a matter of–” the Chief of the Five began.