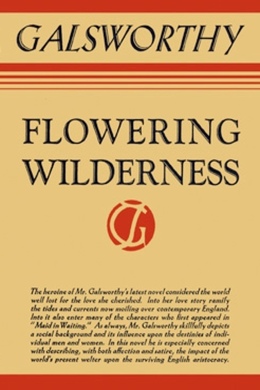 Dinny Cherrell has been proposed to numerous times. But no one has ever come close to touching her independent spirit. That is, until she encounters Wilfred Desert. They had first met at Fleur and Michael Mont’s wedding and the spark of attraction felt all those years before develops into a deep, all-consuming love. But Wilfred, made cynical by the war and a wanderer, is a complicated and tortured soul. When his past actions come back to haunt him, and the disapproval of Dinny’s family work against them, their love is tested to the very limit…

In 1930, shortly after the appearance of the Budget, the eighth wonder of the world might have been observed in the neighbourhood of Victoria Station–three English people, of wholly different type, engaged in contemplating simultaneously a London statue. They had come separately, and stood a little apart from each other in the south-west corner of the open space clear of the trees, where the drifting late afternoon light of spring was not in their eyes. One of these three was a young woman of about twenty-six, one a youngish man of perhaps thirty-four, and one a man of between fifty and sixty. The young woman, slender and far from stupid- looking, had her head tilted slightly upward to one side, and a faint smile on her parted lips. The younger man, who wore a blue overcoat with a belt girt tightly round his thin middle, as if he felt the spring wind chilly, was sallow from fading sunburn; and the rather disdainful look of his mouth was being curiously contradicted by eyes fixed on the statue with real intensity of feeling. The elder man, very tall, in a brown suit and brown buckskin shoes, lounged, with his hands in his trouser pockets, and his long, weathered, good-looking face masked in a sort of shrewd scepticism.

In the meantime the statue, which was that of Marshal Foch on his horse, stood high up among those trees, stiller than any of them.

The effect of this breach of form on the others was diverse; the elder man’s eyebrows went slightly up, and he moved forward as if to examine the horse’s legs. The young woman turned and looked frankly at the speaker, and instantly her face became surprised.

“Then,” said the young woman, “we’ve met. At Fleur Mont’s wedding. You were best man, if you remember, the first I’d seen. I was only sixteen. You wouldn’t remember me–Dinny Cherrell, baptized Elizabeth. They ran me in for bridesmaid at the last minute.”

“I remember your hair perfectly.”

“Nobody ever remembers me by anything else.”

Dinny was thinking: ‘His eyes were the first to flutter me. And they really are beautiful.’

The said eyes had been turned again upon the statue.

“He DID deliver us,” said Desert.

“You were there, of course.”

“Flying, and fed up to the teeth.”

“Yes,” murmured Dinny, “it IS a horse, not just a prancing barrel, with teeth, nostrils and an arch.”

“I like the way it stands up quietly among those trees.”

“How is Michael? You’re a cousin of his, if I remember.”

“Michael’s all right. Still in the House; he has a seat he simply can’t lose.”

“Flourishing. Did you know she had a daughter last year?”

“Yes; they call this one Catherine.”

“You look,” said Dinny, contemplating the sallow darkness of his face, “as if you had been in the sun.”

“Michael once told me you lived in the East.”

“Well, I wander about there.” His face seemed to darken still more, and he gave a little shiver. “Beastly cold, the English spring!”

“And do you still write poetry?”

“Oh! you know of that weakness?”

“I’ve read them all. I like the last volume best.”

He grinned. “Thank you for stroking me the right way; poets, you know, like it. Who’s that tall man? I seem to know his face.”

The tall man, who had moved to the other side of the statue, was coming back.

“Somehow,” murmured Dinny, “I connect him with that wedding, too.”

The tall man came up to them.

“The hocks aren’t all that,” he said.

“I always feel so thankful I haven’t got hocks. We were just trying to decide whether we knew you. Weren’t you at Michael Mont’s wedding some years ago?”

“We all met there. I’m his first cousin on his mother’s side, Dinny Cherrell. Mr. Desert was his best man.”

“Oh! Ah! My name’s Jack Muskham, I’m a first cousin of his father’s.” He turned to Desert. “You admired Foch, it seems.”

Dinny was surprised at the morose look that had come on his face.

“Well,” said Muskham, “he was a soldier all right; and there weren’t too many about. But I came here to see the horse.”

“It is, of course, the important part,” murmured Dinny.

The tall man gave her his sceptical smile.

“One thing we have to thank Foch for, he never left us in the lurch.”

“Any particular reason for that remark?”

Muskham shrugged his shoulders, raised his hat to Dinny, and lounged away.

When he had gone there was a silence as over deep waters.