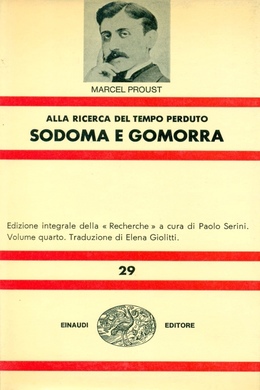 Cities of the Plain

The narrator not only depicts the class tensions of a changing France at the beginning of the twentieth century but also exposes the decadence of aristocratic Parisian society and muses upon the subjects of homosexuality and sexual jealousy. Taking up for the first time in his novels, Proust explores the theme of homosexual love and examines how destructive sexual jealousy can be for those who suffer it. Sodom and Gomorrah is also an unforgiving analysis of both the decadent high society of Paris and the rise of a philistine bourgeoisie that will inevitably supplant it.

The reader will remember that, long before going that day (on the evening of which the Princesse de Guermantes was to give her party) to pay the Duke and Duchess the visit which I have just described, I had kept watch for their return and had made, in the course of my vigil, a discovery which, albeit concerning M. de Charlus in particular, was in itself so important that I have until now, until the moment when I could give it the prominence and treat it with the fulness that it demanded, postponed giving any account of it.

I had, as I have said, left the marvellous point of vantage, so snugly contrived for me at the top of the house, commanding the broken and irregular slopes leading up to the Hôtel de Bréquigny, and gaily decorated in the Italian manner by the rose-pink campanile of the Marquis de Frécourt’s stables. I had felt it to be more convenient, when I thought that the Duke and Duchess were on the point of returning, to post myself on the staircase. I regretted somewhat the abandonment of my watch-tower.

But at that time of day, namely the hour immediately following luncheon, I had less cause for regret, for I should not then have seen, as in the morning, the footmen of the Bréquigny-Tresmes household, converted by distance into minute figures in a picture, make their leisurely ascent of the abrupt precipice, feather-brush in hand, behind the large, transparent flakes of mica which stood out so charmingly upon its ruddy bastions.

Failing the geologist’s field of contemplation, I had at least that of the botanist, and was peering through the shutters of the staircase window at the Duchess’s little tree and at the precious plant, exposed in the courtyard with that insistence with which mothers ‘bring out’ their marriageable offspring, and asking myself whether the unlikely insect would come, by a providential hazard, to visit the offered and neglected pistil. My curiosity emboldening me by degrees, I went down to the ground-floor window, which also stood open with its shutters ajar.

I could hear distinctly, as he got ready to go out, Jupien who could not detect me behind my blind, where I stood perfectly still until the moment when I drew quickly aside in order not to be seen by M. de Charlus, who, on his way to call upon Mme. de Villeparisis, was slowly crossing the courtyard, a pursy figure, aged by the strong light, his hair visibly grey. Nothing short of an indisposition of Mme. de Villeparisis (consequent on the illness of the Marquis de Fierbois, with whom he personally was at daggers drawn) could have made M. de Charlus pay a call, perhaps for the first time in his life, at that hour of the day.

For with that eccentricity of the Guermantes, who, instead of conforming to the ways of society, used to modify them to suit their own personal habits (habits not, they thought, social, and deserving in consequence the abasement before them of that thing of no value, Society—thus it was that Mme. de Marsantes had no regular ‘day,’ but was at home to her friends every morning between ten o’clock and noon), the Baron, reserving those hours for reading, hunting for old curiosities and so forth, paid calls only between four and six in the afternoon.

At six o’clock he went to the Jockey Club, or took a stroll in the Bois. A moment later, I again recoiled, in order not to be seen by Jupien. It was nearly time for him to start for the office, from which he would return only for dinner, and not even then always during the last week, his niece and her apprentices having gone to the country to finish a dress there for a customer. Then, realising that no one could see me, I decided not to let myself be disturbed again, for fear of missing, should the miracle be fated to occur, the arrival, almost beyond the possibility of hope (across so many obstacles of distance, of adverse risks, of dangers), of the insect sent from so far as ambassador to the virgin who had so long been waiting for him to appear.

I knew that this expectancy was no more passive than in the male flower, whose stamens had spontaneously curved so that the insect might more easily receive their offering; similarly the female flower that stood here, if the insect came, would coquettishly arch her styles; and, to be more effectively penetrated by him, would imperceptibly advance, like a hypocritical but ardent damsel, to meet him half-way. The laws of the vegetable kingdom are themselves governed by other laws, increasingly exalted.

If the visit of an insect, that is to say, the transportation of the seed of one flower is generally necessary for the fertilisation of another, that is because autofecundation, the fertilisation of a flower by itself, would lead, like a succession of intermarriages in the same family, to degeneracy and sterility, whereas the crossing effected by the insects gives to the subsequent generations of the same species a vigour unknown to their forebears.