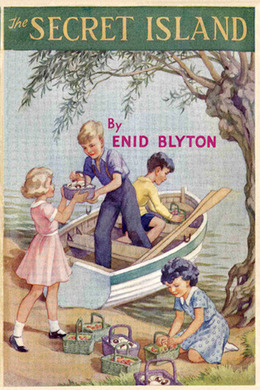 Peggy Arnold, and younger twin siblings Mike and Nora, are living with a harsh aunt and uncle after their parents are thought to have been killed in a plane crash. Aided by Jack, an orphan boy they have befriended, they run away to an island on a nearby lake, and together they make a new home constructed with the branches of a willow tree, this much-loved ‘living house’ being one of the highlights of the story. However, living on one’s own turns out to be far more difficult than they thought, and, along with a lot of fun and happiness, they also suffer a lot of hardship – especially when winter sets in.

Mike, Peggy, and Nora were sitting in the fields, talking together. They were very unhappy. Nora was crying, and would not stop.

As they sat there, they heard a low call. “Coo–ee!”

A boy came running by the hedge and sat down by them. He had a face as brown as a berry and bright blue eyes that shone with mischief.

She showed him her arm, red with slaps.

“If only our father and mother were here they wouldn’t let us live like this,” said Mike. “But somehow I don’t believe they’ll ever come back now.”

“How long is it since they’ve been gone?” asked Jack.

“It’s over two years now,” said Mike. “Dad built a fine new aeroplane, you know, and he set off to fly to Australia. Mother went with him, because she loves flying, too. They got nearly there—and then nothing more was heard of them!”

“And I know Aunt Harriet and Uncle Henry think they will never come back again,” said Nora, beginning to cry once more, “or they would never treat us as they do.”

“Don’t cry any more, Nora,” said Peggy. “Your eyes will get so red and horrid. I’ll do the washing instead of you next time.”

Jack put his arm round Nora. He liked her the best of them all. She was the smallest, although she was Mike’s twin. She had a little face, and a head of black curls. Mike was exactly like her, but bigger. Peggy had yellow hair and was a year older. Nobody knew how old Jack was. He didn’t know himself. He lived with his grandfather on a tumble–down farm, and worked as hard as a man, although he wasn’t much bigger than Mike.

Jack was always dressed in raggedy things, but the children didn’t mind. His feet were bare, and his legs were scratched with brambles. He never grumbled; he never whined. He made a joke of everything, and he had been a good friend to the three miserable children.

“Ever since Aunt Harriet made up her mind that Mummy and Daddy wouldn’t come back, she has been perfectly horrid,” said Nora.

“And so has Uncle Henry,” said Mike. “We none of us go to school now, and I have to help Uncle in the fields from morning to night. I don’t mind that, but I do wish Aunt Harriet wouldn’t treat the two girls so badly. They are not very old, and she makes them do all the work of the house for her.”

“I do every bit of the washing now,” said Nora. “I wouldn’t mind the little things, but the sheets are so big and heavy.”

“And I do all the cooking,” said Peggy. “Yesterday I burnt a cake because the oven got too hot, and Aunt Harriet sent me to bed for the rest of the day without anything to eat at all.”

“I climbed through the window and gave her some bread and cheese,” said Mike. “And Uncle caught me and shook me so hard that I couldn’t stand up afterwards. I had to go without my supper, and my breakfast this morning was only a small piece of bread.”

“We haven’t had any new clothes for months,” said Peggy. “My shoes are dreadful. And I don’t know what we shall do when the winter comes, because none of our coats will fit us.”

“You are much worse off than I am,” said Jack. “I have never had anything nice, so I don’t miss it. But you have had everything you wanted, and now it is all taken away from you—you haven’t even a father and mother you can go to for help.”

“Do you remember your father and mother, Jack?” asked Mike. “Did you always live with your old grandfather?”

“I never remember anyone except him,” said Jack. “He’s talking of going to live with an aunt of mine. If he does I shall be left all alone, for she won’t have me, too.”

“Oh, Jack! Whatever will you do?” asked Nora.

“I shall be all right!” said Jack. “The thing is what are you three going to do? I hate to see you all unhappy. If only we could all run away together!”

“We should be found at once and brought back,” said Mike gloomily. “I know that. I’ve read in the papers about boys and girls running away, and they are always found by the police and brought back. If I knew some place where we would never be found, I would run away—and take the two girls with me too. I hate to see them slapped and worked hard by Aunt Harriet.”