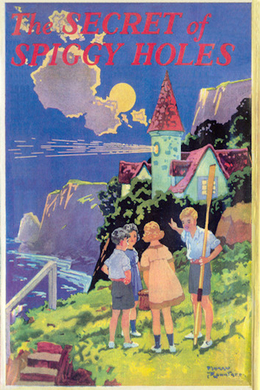 The Secret of Spiggy Holes

While on holiday by the sea, Mike, Peggy, Nora and their friend Jack - reunited again with their parents - go exploring in the caves on the beach. They soon discover a secret passage that leads to the Old House on the cliff, where they find a kidnapped young prince is being held captive! The friends make a bold plan to help the Prince escape - but will it succeed?

The first few days of the summer holiday slipped away happily. The children explored the beach, which was a most exciting one, but rather dangerous. The tide came right up to the cliffs when it was in, and filled most of the caves.

“We shall have to be careful not to get caught in any of these caves when the tide is coming in,” said Jack. “It would be very difficult to get out.”

Miss Dimity warned them too, and told them many stories of people who had explored the caves, forgetting about the tide, and who had had to be rescued by boats when they found that they could not get out of the caves.

“You need not wear your sand–shoes here,” Dimmy told them. “No trippers ever come to Spiggy Holes, leaving their litter and broken glass behind them!”

So they went barefoot, and loved to feel the sand between their toes. The farm–lad, who came to do Dimmy’s garden for her, lent them his boat, and the four children had a wonderful time at low tide, boating around the rocks and all about the craggy coast.

One day there was a very high tide indeed. The waves splashed against the cliffs and all the caves were full of water. There was nothing to do down on the beach, because, for one thing, there was no beach, and for another Dimmy said it was dangerous to go down the cliff–path when the tides were high because the spray made the path slippery, and they might easily slip down and fall into the high water.

“Well, what shall we do then?” said Jack, wandering out into the garden, and picking some pea–pods. He split the pods and emptied the peas into his mouth. Dimmy had a lovely garden—full of peas and beans and lettuces and gooseberries and late cherries and early plums. None of the children could help picking something as they went through it every day.

“I know what we’ll do!” said Mike. “We’ll go and explore the garden of the Old House. Come on!”

They passed the farm–lad, George, who was busy digging up some potatoes. Nora called to him.

“Hallo! We’re going to explore the garden of the Old House. Nobody lives there, do they, George?”

“That house has been empty this twenty years,” said George. “Maybe more. The garden is like a forest!”

“It will be fun to explore it then,” said Peggy. They ran up the slope of the cliff towards the Old House. They were all in sun–suits and shady hats, but even so they were very hot. Soon they came to a high wall that ran all round the big garden of the Old House.

“We can’t climb over this,” said Jack, looking up at the wall, which was three times as tall as he was. “What are we going to do?”

“What about going in through the gates?” said Mike, with a grin. “Or do you feel it would be more exciting to break your leg trying to climb that wall, Jack?”

Everybody laughed. “Well, it would be more exciting to climb the wall,” said Jack, giving Mike a friendly punch. “But we’ll go and find the gates.”

The gates were locked, but the children easily climbed over them. They jumped to the ground on the other side.

There was a long, dark drive in front of them, winding its way below tall, overhanging trees to the front door. The drive was completely overgrown with nettles and thistles, and the children stopped in dismay.

“I say!” said Jack. “We want to be dressed in macintoshes and gum–boots to make our way through these stinging, prickly things! If we push through them we shall get terribly stung!”

“Well, look,” said Nora, pointing to the left. “There’s a better way off to the left there—only just tall grass, and no nettles. Let’s go that way.”

So they went to the left, making their way through shrubberies and overgrown beds. It was a very large garden, and very exciting, for there were all kinds of fruit trees that had not been pruned for years, but whose fruit was sweet and delicious.

The children picked some ripe plums and enjoyed the sweet juice. “Nobody lives here, so it can’t matter having a few plums,” said Nora. “The wasps would have them if we didn’t. Isn’t it hot in this garden!”

“Let’s go and see what the house is like,” said Jack. So they pushed their way through the long sprays of overgrown rose–bushes and went up to the house. It was built of white stone, and was very solid and strong. It had rather small windows, very dirty indeed, and the rooms looked dark and dreary when the children looked through the glass.

They came to the round tower built on to one side of the house, just as the tower of Peep–Hole was built on to Miss Dimity’s house.