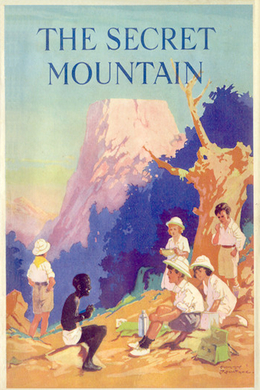 Jack, Peggy, Mike and Nora are off on another exciting adventure when they run away to Africa, with their friend Prince Paul, in a desperate search for their parents who are being held captive in the Secret Mountain. But where is the mountain? And who are the strange red-haired people who live there? The rescue mission seems destined to fail. Then, on top of everything, the children are taken captive. And one of them is to be sacrificed to the Sun-god.

Not one of the five children thought of the great risk and danger of the adventure they were so light–heartedly planning.

“Shall we tell Dimmy?” said Nora.

“Of course not,” said Jack scornfully. “You know what grown–ups are—why, Dimmy would at once telephone to Paul’s pilot and forbid him to take us anywhere.”

“Well, it seems horrid to leave her and not tell her anything,” said Nora, who was very fond of Miss Dimmy.

“We’ll leave a note for her that she can read when we are well away,” said Mike. “But we really mustn’t do anything to warn her or anyone else. My word—what a mercy that Paul had that aeroplane for his birthday!”

“Don’t be an idiot, Paul,” said Jack. “We’ve got to get a few things together. We ought to have guns, I think, for one thing.”

“Guns don’t,” said Jack. “You girls don’t need to have guns. But where can we get these things—I’m sure I don’t know.”

“Pilescu, my pilot, can get everything we want,” said Prince Paul. “Don’t worry.”

“But how will he know what to get?” asked Mike. “I hardly know myself what we ought to take.”

Soon Paul was holding a most extraordinary talk with his puzzled pilot. In the end Pilescu said he must come round to the flat and talk to his small master. He could not believe that he was really to do what Paul commanded.

“I say—suppose your pilot refuses to do what you tell him?” said Jack. “I’m sure an English pilot would just laugh and tell us to go back to school and learn our tables or something!”

“Pilescu is my man,” said the little Prince, putting his small chin into the air, and looking very royal all of a sudden. “He has sworn an oath to me to obey me all my life. He has to do what I say.”

“Then I will no longer have him as my man,” said Paul fiercely. “And that will break his heart, for he loves me and honours me. I am his prince, and one day I will be his king.”

“You talk like a history book,” said Peggy with a laugh. “All right, Paul—you try to get Pilescu to do what we have planned. He’ll soon be here.”

In twenty minutes Pilescu arrived. He was a strange–looking person, very tall, very strong, with fierce black eyes and a flaming red beard that seemed on fire when it caught the sun.

He bowed to all the children in turn, for his manners were marvellous. Then he spoke to Paul in a curiously gentle voice.

“Little Prince, I cannot believe that you wish me to do what you said on the telephone. It is not possible. I cannot do it.”

Prince Paul flew into a rage, and stamped on the floor, his face bright red, and his dark eyes flashing in anger.

“Pilescu! How dare you talk to me like this? My father, the king, told me that you must do my smallest wish. I will not have you for my man. I will send you back to Baronia to my father and ask him for a better man.”

“Little Prince, I held you in my arms when you were born, and I promised then that you should be my lord,” said Pilescu, in a troubled voice. “I shall never leave you, now that your father has sent me to be with you. But do not ask me to do what I think may bring danger to you.”

“Pilescu! Shall I, the king’s son, think of danger!” cried the little Prince. “These are my friends you see here. They are in trouble and I have promised to help them. Do you not remember how they saved me when I was kidnapped from my country of Baronia? Now it is my turn to help them. You will do what I say.”

The other four children watched in astonishment. They had not seen Paul acting the prince before. Before ten minutes had gone by the big Baronian had promised to do all that his haughty little master demanded. He bowed himself out and was gone from the flat before Dimmy came to find out who the visitor was.

“Good, Paul!” said Mike. “Now all we’ve got to do is to wait till Pilescu lets us know how he got on.”

Before the night was gone Pilescu telephoned to Prince Paul. The boy came running to the others, his face eager and shining.

“Pilescu has found out everything for us. He has bought all we need, but he says we must pack two bags with all we ourselves would like to have. So we must do that. We must leave the house at midnight, get into the car that will be waiting for us at the corner—and go to the aerodrome!”

“Golly! How exciting!” said Mike. The girls rubbed their hands, thrilled to think of the adventure starting so soon. Only Jack looked a little doubtful. He was the eldest, and he wondered for the first time if he ought to let the girls go on this new and strange adventure.