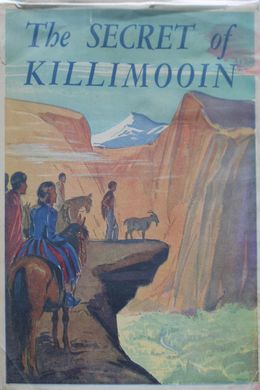 An exciting invitation to spend the summer in Baronia, the home of Prince Paul, takes Mike, Peggy, Nora and Jack to a land of lakes and mountains, where statues in a ruined temple are said to come alive. When they encounter a band of robbers, the friends find themselves on a dangerous adventure. But will they uncover the mystery of the Secret Forest?

Three excited boys stood on a station platform, waiting for a train to come in.

“I’m going to tell the girls the news,” said Jack.

“I’m going to tell them!” said Prince Paul, his big dark eyes glowing. “It’s my news, not yours.”

“All right, all right,” said Mike. “You tell Nora and Peggy then, but don’t be too long about it or I shall simply have to burst in!”

The three boys were waiting for Nora and Peggy to come back from their boarding–school for the summer holidays. Mike, Jack and Prince Paul all went to the same boys’ boarding–school, and they had broken–up the day before. Mike was the twin brother of Nora, and Peggy was his other sister, a year older than Mike and Nora.

Jack was their adopted brother. He had no father or mother of his own, so Captain and Mrs. Arnold, the children’s father and mother, had taken him into their family, and treated him like another son. He went to boarding–school with Mike, and was very happy.

Prince Paul went to the same school too. He was a great friend of theirs, for a year or two back the children had rescued him when he was kidnapped. His father was the King of Baronia, and the little prince spent his term–time at an English boarding–school, and his holidays in his own distant land of Baronia. He was the youngest of the five.

“Here comes the train, hurrah!” yelled Mike, as he saw a cloud of white smoke in the distance.

“The girls will be sure to be looking out of the window,” said Jack.

The train came nearer and nearer, and the engine chuffed more and more loudly. It ran alongside the platform, slowed down and stopped. Doors swung open.

Prince Paul gave a yell. “There they are! Look! In the middle of the train!”

Sure enough, there were the laughing faces of Peggy and Nora, leaning out of the window. Then their door swung open and out leapt the two girls. Nora was dark and curly–haired like Mike. Peggy’s golden hair shone in the sun. She had grown taller, but she was still the same old Peggy.

“Peggy! Nora! Welcome back!” yelled Mike. He hugged his twin–sister, and gave Peggy a squeeze too. All five children were delighted to be together again. They had had such adventures, they had shared so many difficulties, dangers and excitements. It was good to be together once more, and say, “Do you remember this, do you remember that?”

Prince Paul was always a little shy at first when he met the two girls. He held out his hand politely to shake hands, but Peggy gave a squeal and put her arms round him.

“Paul’s got some news,” said Mike, suddenly remembering. “Buck up and tell it, Paul.”

“I’ve got an invitation for you all,” said the little prince. “Will you come to my land of Baronia with me for the holidays?”

There was a shriek of delight from the two girls.

“Oh! What a marvellous surprise!”

Paul beamed. “Yes, it is a fine surprise, isn’t it?” he said. “I thought you’d be pleased. Mike and Jack are thrilled too.”

“It will be a real adventure to go to Baronia,” said Mike. “A country hidden in the heart of mountains—with a few beautiful towns, hundreds of hidden villages, great forests—golly, it will be grand.”

“Oh, Paul, how decent of your father to ask us!” said Nora, putting her arm through the little prince’s. “How long will it take us to get there?”

“We shall fly in my aeroplane,” said Paul. “Ranni and Pilescu, my two men, will fetch us tomorrow.”

“This is just too good to be true!” said Nora, dancing round in joy. She bumped into a porter wheeling a barrow. “Oh—Sorry, I didn’t see you. I say, Mike, we’d better get our luggage. Can you see a porter with an empty barrow?”

“We thought we were going to the seaside with Daddy and Mummy,” said Nora.

“So we were,” said Jack. “But when Paul’s father cabled yesterday, saying he was sending the aeroplane to fetch Paul, he said we were all to come too, if we were allowed to.”

“And you know how Daddy and Mummy like us to travel and see all we can!” said Mike. “They were just as pleased about it as we were—though they were sorry not to have us for the holidays, of course.”

“We are not to take many clothes,” said Jack. “Paul says we can dress up in Baronian things—they are much more exciting than ours! I shall feel I’m wearing fancy dress all the time!”

The girls sighed with delight. They imagined themselves dressed in gay, swinging skirts and bright bodices—lovely! They would be real Baronians.