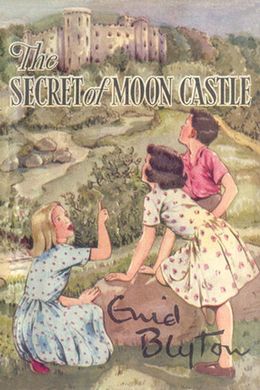 The Secret of Moon Castle

The family of Prince Paul of Baronia is visiting England and his parents wish to rent a castle to stay in for several weeks. Mrs. Arnold has been asked to help locate a suitable castle, knowing England far better than Paul’s parents. The Arnolds are invited to spend some time in the castle with them, too, and are soon puzzled by strange events happening in the castle: odd noises that occur, eyes in portraits that shine mysteriously, lights that shine in tower rooms, despite being locked tight. It seems that there are unknown people who do not want them to stay in the castle. On occasion, a strange tingling effect is felt by them, and strange colored lights seem to rise from the ground, and it seems to be due to a strange metal (possibly radioactive) that mysterious men are mining for unknown reasons.

The next few days were very exciting in more ways than one. For one thing it was great fun to be at home again—no lessons—no bells clanging—no prep in the evenings. For another thing it was most exciting to read through the particulars of various castles that could be rented.

There were not very many. Mrs. Arnold looked through the papers that came, and quickly decided which offers were no good. Big mansions were offered as well, and it really seemed to Mrs. Arnold that it might almost be better to take one of those for Paul’s family. The castles seemed in such remote places, or had been empty for some time, with just a caretaker in.

“Oh no, Mother—do let’s have a castle,” said Mike. “A big house wouldn’t be nearly such fun.”

“I’m not thinking about how much fun I can provide for you children,” said his mother. “I’m thinking about the difficulties Paul’s mother will have, in a big, bare castle, with very old–fashioned ways of lighting and heating.”

“But Baronia isn’t modern, either,” said Mike. “Paul’s own castle hasn’t got a lot of things that a big hotel in England would have, for instance. Mother, do find a castle. It sounds so much more exciting than a big house.”

“Look through these,” said his mother. “Take the papers with you, and pore over them with the others. They are all ones I think are no good. You will see what I mean when you read through the particulars.”

Mike carried away the papers, feeling rather thrilled. What fun to try to choose a castle. He called the other four, and they took the papers out into the garden.

“Here you are—have one or two each,” said Mike. “We’ll all read through them, and see what we think. Mother’s turned all these down.”

They read solemnly through the particulars. “Castle and fifty thousand acres,” said Jack. “Whew! Do people rent fifty thousand acres as well? Oh—this castle’s no good. It’s only got twelve rooms furnished—goodness knows how many your parents will want, Paul. It must be maddening to be a King and Queen and have to have such enormous places to live in.”

“I like our castle in Baronia,” said Paul. “But I would rather be an ordinary boy and live the life you do, Jack.”

“I don’t wonder Mother turned these down,” said Mike, putting down his papers. “They’re no good at all. Either the owners want to live in one wing of the castle too—or they want Paul’s people to rent it for a whole year—or the place isn’t furnished. It’s a lot more difficult than I thought it would be, to get a castle for a month or two!”

“There’s one here,” said Peggy, suddenly. “It sounds rather thrilling. I don’t quite know why Mother turned it down. Listen.”

The others turned to her. They were all lying on the grass, the papers spread around them. Peggy told them about the particulars she held in her hand.

“It’s called Moon Castle,” she said. “That’s a lovely name, isn’t it? Moon Castle! And it’s big, but not too big—just about right for Paul’s family. It’s got caretakers in, so it should be in fairly good order. It can be had immediately, because the owners don’t live in it. It’s high on a hill with ‘wonderful panoramic views over a countryside of moorland, wood and waterways’.”

“It sounds good,” said Mike, sitting up. “Go on—anything else?”

“It’s very old,” said Peggy. “It says here, ‘a castle full of myth and legend’, whatever that means. And it says, ‘What stories its old walls could tell—tales of violence and mystery, hate and greed’. Goodness, it’s just as well that old walls don’t suddenly begin to talk, if that’s the kind of thing they say!”

“It really does sound rather good,” said Nora. “Why did Mother turn it down, I wonder?”

“There she is!” said Mike, as his mother came out into the garden, with a basket and a pair of scissors for picking flowers. “Mother! Hey, Mother! Why did you turn down Moon Castle? It sounds super.”

“Moon Castle? Well, really because it sounds so very cut off from everywhere,” said Mrs. Arnold. “It isn’t near any town—and the only village anywhere near is an old ruined one which has the queer name of Moon. I suppose that’s how the castle got its name.”

“But would it matter, being cut off from everywhere?” asked Peggy.

“Yes, I think so,” said her mother. “For a big household such as Paul’s mother would bring, you would need good shops at least fairly near—but the nearest shops are about twenty miles away, it seems to me. It sounded such a lonely, desolate place—it really gave me the creeps!”

“Oh Mother! But that’s the sort of castle we’d all love,” said Nora. “And Paul’s mother would bring plenty of cars—wouldn’t she, Paul? So that shopping would be easy.”