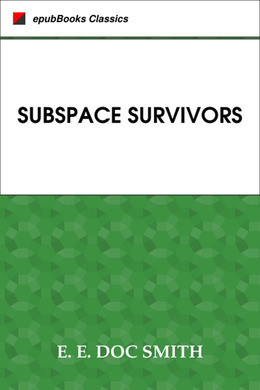 NOTE: this is the original short story. For the full length novel, see the link below.

There has always been, and will always be, the problem of surviving the experience that any trained expert can handle…when there hasn’t been any first survivor to be an expert! When no one has ever gotten back to explain what happened…

It is essentially in three overlapping parts:

“All passengers, will you pay attention, please?” All the high–fidelity speakers of the starship Procyon spoke as one, in the skillfully–modulated voice of the trained announcer. “This is the fourth and last cautionary announcement. Any who are not seated will seat themselves at once. Prepare for take–off acceleration of one and one–half gravities; that is, everyone will weigh one–half again as much as his normal Earth weight for about fifteen minutes. We lift in twenty seconds; I will count down the final five seconds…. Five … Four … Three … Two … One … Lift!”

The immense vessel rose from her berth; slowly at first, but with ever–increasing velocity; and in the main lounge, where many of the passengers had gathered to watch the dwindling Earth, no one moved for the first five minutes. Then a girl stood up.

She was not a startlingly beautiful girl; no more so than can be seen fairly often, of a summer afternoon, on Seaside Beach. Her hair was an artificial yellow. Her eyes were a deep, cool blue. Her skin, what could be seen of it—she was wearing breeches and a long–sleeved shirt—was lightly tanned. She was only about five–feet–three, and her build was not spectacular. However, every ounce of her one hundred fifteen pounds was exactly where it should have been.

First she stood tentatively, flexing her knees and testing her weight. Then, stepping boldly out into a clear space, she began to do a high–kicking acrobatic dance; and went on doing it as effortlessly and as rhythmically as though she were on an Earthly stage.

“You mustn’t do that, Miss!” A stewardess came bustling up. Or, rather, not exactly bustling. Very few people, and almost no stewardesses, either actually bustle in or really enjoy one point five gees. “You really must resume your seat, Miss. I must insist…. Oh, you’re Miss Warner….”

“But really, Miss Warner, it’s regulations, and if you should fall….”

“Foosh to regulations, and pfui on ‘em. I won’t fall. I’ve been wondering, every time out, if I could do a thing, and now I’m going to find out.”

Jackknifing double, she put both forearms flat on the carpet and lifted both legs into the vertical. Then, silver slippers pointing motionlessly ceilingward, she got up onto her hands and walked twice around a vacant chair. She then performed a series of flips that would have done credit to a professional acrobat; the finale of which left her sitting calmly in the previously empty seat.

“See?” she informed the flabbergasted stewardess. “I could do it, and I didn’t….”

Her voice was drowned out in a yell of approval as everybody who could clap their hands did so with enthusiasm. “More!” “Keep it up, gal!” “Do it again!”

“Oh, I didn’t do that to show off!” Barbara Warner flushed hotly as she met the eyes of the nearby spectators. “Honestly I didn’t—I just had to know if I could.” Then, as the applause did not die down, she fairly scampered out of the room.

For one hour before the Procyon’s departure from Earth and for three hours afterward, First Officer Carlyle Deston, Chief Electronicist, sat attentively at his board. He was five feet eight inches tall and weighed one hundred sixty–two pounds net. Just a little guy, as spacemen go. Although narrow–waisted and, for his heft, broad–shouldered, he was built for speed and maneuverability, not to haul freight.

Watching a hundred lights and half that many instruments, listening to two phone circuits, one with each ear, and hands moving from switches to rheostats to buttons and levers, he was completely informed as to the instant–by–instant status of everything in his department.

Although attentive, he was not tense, even during the countdown. The only change was that at the word “Two” his right forefinger came to rest upon a red button and his eyes doubled their rate of scan. If anything in his department had gone wrong, the Procyon’s departure would have been delayed.

And again, well out beyond the orbit of the moon, just before the starship’s mighty Chaytor engines hurled her out of space as we know it into that unknowable something that is hyperspace, he poised a finger. But Immergence, too, was normal; all the green lights except one went out, needles dropped to zero, both phones went dead, all signals stopped. He plugged a jack into a socket below the one remaining green light and spoke:

“Procyon One to Control Six. Flight Eight Four Nine. Subspace Radio Test One. How do you read me, Control Six?”

“Control Six to Procyon One. I read you ten and zero. How do you read me, Procyon One?”

“Ten and zero. Out.” Deston flipped a toggle and the solitary green light went out.

Perfect signal and zero noise. That was that. From now until Emergence—unless something happened—he might as well be a passenger.