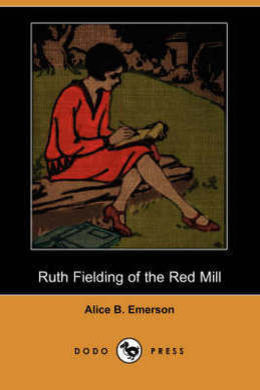 Ruth Fielding of the Red Mill

Ruth Fielding, a recently-orphaned girl, arrives in Cheslow, New York to live with her uncle, Jabez Potter, at the Red Mill with his housekeeper, Aunt Alvirah Boggs. Ruth is greatly disappointed in the cold reception she receives. Uncle Jabez seems to care very little about her, and all that he has to say is that she must earn her keep. Uncle Jabez grows even more difficult after his cash box disappears during a flood.

The sound of the drumming wheels! It had roared in the ears of Ruth Fielding for hours as she sat on the comfortably upholstered seat in the last car of the afternoon Limited, the train whirling her from the West to the East, through the fertile valleys of Upper New York State.

This had been a very long journey for the girl, but Ruth knew that it would soon come to an end. Cheslow was not many miles ahead now; she had searched it out upon the railroad timetable, and upon the map printed on the back of the sheet; and as the stations flew by, she had spelled their names out with her quick eyes, until dusk had fallen and she could no longer see more than the signal lamps and switch targets as the train whirled her on.

But she still stared through the window. This last car of the train was fairly well filled, but she had been fortunate in having a seat all to herself; she was glad this was so, for a person in the seat with her might have discovered how hard it was for her to keep back the tears.

For Ruth Fielding was by no means one of the “crying kind,” and she had forbidden herself the luxury of tears on this occasion.

“We had all that out weeks ago, you know we did!” she whispered, apostrophizing that inner self that really wanted to break the brave compact. “When we knew we had to leave dear old Darrowtown, and Miss True Pettis, and Patsy Hope, and—and ‘all other perspiring friends,’ to quote Amoskeag Lanfell’s letter that she wrote home from Conference.

“No, Ruth Fielding! Uncle Jabez Potter may be the very nicest kind of an old dear. And to live in a mill—and one painted red, too! That ought to make up for a good many disappointments—”

Her soliloquy was interrupted by a light tap upon her shoulder. Ruth glanced around and up quickly. She saw standing beside her the tall old gentleman who had been sitting two seats behind on the other side of the aisle ever since the train left Buffalo.

He was a spare old gentleman, with a gaunt, eagle–beaked face, cleanly shaven but for a sweeping iron–gray mustache, his iron–gray hair waved over the collar of his black coat—a regular mane of hair which flowed out from under the brim of his well–brushed, soft–crowned hat. His face would have been very stern in its expression had it not been for the little twinkle in his bright, dark eyes.

“Why don’t I do what, sir?” she responded, not without a little gulp, for that lump would rise in her throat.

“Why don’t you cry?” questioned the strange old gentleman, still speaking softly and with that little twinkle in his eye.

“Because I am determined not to cry, sir,” and now Ruth could call up a little smile, though perhaps the corners of her mouth trembled a bit.

The gentleman sat down beside her, although she had not invited him to do so. She was not at all afraid of him and, after all, perhaps she was glad to have him do it.

“Tell me all about it,” he suggested, with such an air of confidence and interest that Ruth warmed more and more toward him.

But it was a little hard to begin. When he told her, however, that he was going to Cheslow, too—indeed, that that was his home—it was easier by far.

“I am Doctor Davison, my dear,” he said. “If you are going to live in Cheslow you will hear all about Doctor Davison, and you would better know him at first–hand, to avoid mistakes,” and his eyes twinkled more than ever, though his stern mouth never relaxed.

“I expect that my new home is some little way outside of Cheslow,” Ruth said, timidly. “They call it the Red Mill.”

The humorous light faded out of the dark, bright eyes of the gentleman. Yet even then his countenance did not impress her as being unkindly.

“Then you,” he said, speaking even more gently than before, “are little Mary Potter’s daughter?”

He nodded, looking away from her out of the window at the fast–darkening landscape which hurried by them.

“And poor papa died last winter. I had no claim upon the kind friends who helped me when he died,” pursued Ruth, bravely. “They wrote to Uncle Jabez and he—he said I could come and live with him and Aunt Alvirah Boggs.”

In a flash the twinkle came back into his eyes, and he nodded again.

“Ah, yes! Aunt Alviry,” he said, giving the name its old–fashioned, homely pronunciation. “I had forgotten Aunt Alviry,” and he seemed quite pleased to remember her.

“She keeps house for Uncle Jabez, I understand,” Ruth continued. “But she isn’t my aunt.”

For some reason this made Ruth feel better.”