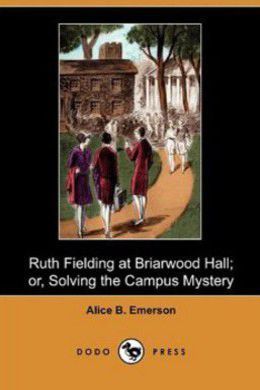 or Solving the Campus Mystery

Ruth’s greatest desire has come true—to attend Briarwood Hall with Helen Cameron. As soon as the girls arrive, they are accosted by Mary Cox, known as the Fox for her cunning. Mary wishes the girls to join her club, the Up and Doing Club. Helen, in particular, is enraptured by Mary’s description of her club. Shortly after Mary Cox approaches the girls, Madge Steele informs the girls about her club, the Forward Club.

The sun was a regular lie–abed on this Autumn morning, banked about by soft clouds and draperies of mist; but they glowed pink along the horizon—perhaps blushing for Old Sol’s delinquency. The mist hung tenderly over the river, too—indeed, it masked the entire Valley of the Lumano—lying thick and dank upon the marshes and the low meadows, but wreathed more lightly about the farmhouses and their outbuildings, and the fodder and haystacks upon the higher ground.

But suddenly the sun flung off the bedclothes and leaped right into the sky. That long, low bank of cloud that had been masking him, melted away and the shreds of mist were burned up in a hurry as his warm rays spread abroad, taking the entire valley in their arms.

Farmhouses, where the kitchen chimney smoke had been rising straightly into the air, immediately put on a new bustle. Doors opened and shut. There was the stamping of horses in the stables as they crunched their corn; cows lowed as the milk–pails rattled; sheep baa–a–ed in their folds, and the swine, fearing that some other of the farm stock would get their share of the breakfast, squealed in eager anticipation.

On a knoll by the river side stood the rambling buildings belonging to Jabez Potter, who kept the Red Mill. The great wheel beside the mill end of the main structure had not yet begun to turn, but there was plenty of bustle about the pleasant house.

The sun had scarcely popped up when a very pretty, bright–looking girl ran out upon the porch and gazed earnestly along the road that followed the Lumano toward Osago Lake. She looked out from under a shielding hand, for the sun was in her eyes. Around the corner of the house came a tall, dark–faced man whose long jaws were cleanly shaven and deeply lined. His clothing was full of milldust and it seemed to have been ground into his face for so many years that it was now a part of the grain and texture of his skin. He did not smile at the girl as he said:

“You ain’t looking for them yet; air you, Ruth? It’s much too early. Help your Aunt Alviry put breakfast on the table. She’ll hev it all to do when you’re gone.”

The tone was stern, but the girl seemed to be used to it, for her face did not cloud over, and the smiles rippled about her mouth as she replied:

“I’m so full of happiness, Uncle Jabez, that you mustn’t mind if I’m looking for Helen and Tom ahead of time. It doesn’t seem possible that I am actually going with them.”

“It seems real enough to me,” grumbled Jabez Potter. “I hope you’ll get enough out of it to pay us for all the trouble and cost of your going—that I do.”

But even this seemingly unkind speech did not ruffle the girl’s temper.

“You wait and see, Uncle Jabez—you just wait and see,” she said, nodding to him. “I’ll prove it the best investment you ever made.”

He didn’t smile—Jabez Potter was not one of the smiling kind; but his face relaxed and his eyes twinkled a little.

“I sha’n’t look for cent. per cent. interest on my money, Niece Ruth,” he said, and stumped into the house in his heavy boots.

Ruth Fielding, who had come to the Red Mill only a few months before, having lost all other relatives but her great–uncle, who owned the mill, ran into the kitchen, too, where a little old woman, with bent back and very bright eyes, was hovering over the stove. The breakfast was ready to be served and this little woman was pottering about, muttering to herself a continual complaining phrase:

Aunt Alvirah Boggs (who was everybody’s Aunt Alvirah, but no blood relation to either Ruth or her uncle) was not a morose person, however, despite her rheumatic troubles. She smiled on Ruth and patted her hand as the girl sat down beside her at the table.

“Seems like we’d be lost without our pretty leetle creetur about,” said Aunt Alvirah. “I don’t see what the old house will do without her.”

“I’ll be home at Thanksgiving—if Uncle will let me,” said Ruth, quickly, and glancing at the old man; “and again at Christmas, and at Easter. Why, the intervals will go like that,” and she snapped her fingers.

“All this junketing up and down the country will cost money, Niece Ruth,” admonished Uncle Jabez.

He was, by nature, a very close and careful man with money—a reputed miser, in fact. And that he did hoard up money, and loved it for itself, must be confessed. When he had lost a cash–box he kept in the mill, containing money and other valuables, it had been a great trouble to Uncle Jabez. But through a fortuitous train of circumstances Ruth Fielding had recovered the cash–box for him, with its contents untouched. It was really because he considered himself in her debt for this act, and that he prided himself upon paying his debts, that Jabez Potter had come to agree that Ruth should go away to school.

He had not done the thing in a niggardly way, when once he gave his consent.”