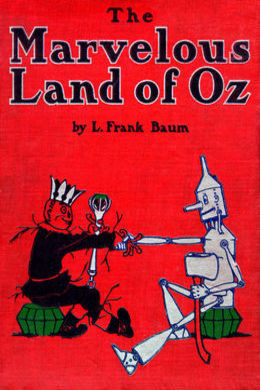 The Marvelous Land of Oz

The Marvelous Land of Oz is the second book in Baum’s Oz series. The series chronicles the further adventures of Dorothy both in and out of Oz, as she deals with the characters, situations and desires which continue to spill over from her first fateful adventure. Tip and his creation, Jack Pumpkin, run away to Oz, where they save the city after it is captured by girls.

In the Country of the Gillikins, which is at the North of the Land of Oz, lived a youth called Tip. There was more to his name than that, for old Mombi often declared that his whole name was Tippetarius; but no one was expected to say such a long word when “Tip” would do just as well.

This boy remembered nothing of his parents, for he had been brought when quite young to be reared by the old woman known as Mombi, whose reputation, I am sorry to say, was none of the best. For the Gillikin people had reason to suspect her of indulging in magical arts, and therefore hesitated to associate with her.

Mombi was not exactly a Witch, because the Good Witch who ruled that part of the Land of Oz had forbidden any other Witch to exist in her dominions. So Tip’s guardian, however much she might aspire to working magic, realized it was unlawful to be more than a Sorceress, or at most a Wizardess.

Tip was made to carry wood from the forest, that the old woman might boil her pot. He also worked in the corn-fields, hoeing and husking; and he fed the pigs and milked the four-horned cow that was Mombi’s especial pride.

But you must not suppose he worked all the time, for he felt that would be bad for him. When sent to the forest Tip often climbed trees for birds’ eggs or amused himself chasing the fleet white rabbits or fishing in the brooks with bent pins. Then he would hastily gather his armful of wood and carry it home. And when he was supposed to be working in the corn-fields, and the tall stalks hid him from Mombi’s view, Tip would often dig in the gopher holes, or if the mood seized him–lie upon his back between the rows of corn and take a nap. So, by taking care not to exhaust his strength, he grew as strong and rugged as a boy may be.

Mombi’s curious magic often frightened her neighbors, and they treated her shyly, yet respectfully, because of her weird powers. But Tip frankly hated her, and took no pains to hide his feelings. Indeed, he sometimes showed less respect for the old woman than he should have done, considering she was his guardian.

There were pumpkins in Mombi’s corn-fields, lying golden red among the rows of green stalks; and these had been planted and carefully tended that the four-horned cow might eat of them in the winter time. But one day, after the corn had all been cut and stacked, and Tip was carrying the pumpkins to the stable, he took a notion to make a “Jack Lantern” and try to give the old woman a fright with it.

So he selected a fine, big pumpkin–one with a lustrous, orange-red color–and began carving it. With the point of his knife he made two round eyes, a three-cornered nose, and a mouth shaped like a new moon. The face, when completed, could not have been considered strictly beautiful; but it wore a smile so big and broad, and was so Jolly in expression, that even Tip laughed as he looked admiringly at his work.

The child had no playmates, so he did not know that boys often dig out the inside of a “pumpkin-jack,” and in the space thus made put a lighted candle to render the face more startling; but he conceived an idea of his own that promised to be quite as effective. He decided to manufacture the form of a man, who would wear this pumpkin head, and to stand it in a place where old Mombi would meet it face to face.

“And then,” said Tip to himself, with a laugh, “she’ll squeal louder than the brown pig does when I pull her tail, and shiver with fright worse than I did last year when I had the ague!”

He had plenty of time to accomplish this task, for Mombi had gone to a village–to buy groceries, she said–and it was a journey of at least two days.

So he took his axe to the forest, and selected some stout, straight saplings, which he cut down and trimmed of all their twigs and leaves. From these he would make the arms, and legs, and feet of his man. For the body he stripped a sheet of thick bark from around a big tree, and with much labor fashioned it into a cylinder of about the right size, pinning the edges together with wooden pegs. Then, whistling happily as he worked, he carefully jointed the limbs and fastened them to the body with pegs whittled into shape with his knife.

By the time this feat had been accomplished it began to grow dark, and Tip remembered he must milk the cow and feed the pigs. So he picked up his wooden man and carried it back to the house with him.

During the evening, by the light of the fire in the kitchen, Tip carefully rounded all the edges of the joints and smoothed the rough places in a neat and workmanlike manner. Then he stood the figure up against the wall and admired it. It seemed remarkably tall, even for a full-grown man; but that was a good point in a small boy’s eyes, and Tip did not object at all to the size of his creation.