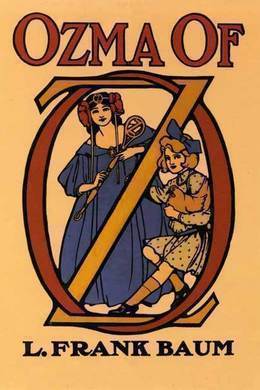 Blown overboard while sailing with her uncle, Dorothy finds herself in the fairy realm of Ev. She sets out with her friends to rescue the Queen of Ev and her ten children, who have been imprisoned by the cruel Nome King. But even Ozma, the wise Ruler of Oz, is no match for the clever king, and it’s up to Dorothy to save everyone from terrible danger. But will the Nome King’s enchantments be too much even for the plucky little girl from Kansas?

The wind blew hard and joggled the water of the ocean, sending ripples across its surface. Then the wind pushed the edges of the ripples until they became waves, and shoved the waves around until they became billows. The billows rolled dreadfully high: higher even than the tops of houses. Some of them, indeed, rolled as high as the tops of tall trees, and seemed like mountains, and the gulfs between the great billows were like deep valleys.

All this mad dashing and splashing of the waters of the big ocean, which the mischievous wind caused without any good reason whatever, resulted in a terrible storm, and a storm on the ocean is liable to cut many queer pranks and do a lot of damage.

At the time the wind began to blow, a ship was sailing far out upon the waters. When the waves began to tumble and toss and to grow bigger and bigger the ship rolled up and down, and tipped sidewise–first one way and then the other–and was jostled around so roughly that even the sailor-men had to hold fast to the ropes and railings to keep themselves from being swept away by the wind or pitched headlong into the sea.

And the clouds were so thick in the sky that the sunlight couldn’t get through them; so that the day grew dark as night, which added to the terrors of the storm.

The Captain of the ship was not afraid, because he had seen storms before, and had sailed his ship through them in safety; but he knew that his passengers would be in danger if they tried to stay on deck, so he put them all into the cabin and told them to stay there until after the storm was over, and to keep brave hearts and not be scared, and all would be well with them.

Now, among these passengers was a little Kansas girl named Dorothy Gale, who was going with her Uncle Henry to Australia, to visit some relatives they had never before seen. Uncle Henry, you must know, was not very well, because he had been working so hard on his Kansas farm that his health had given way and left him weak and nervous. So he left Aunt Em at home to watch after the hired men and to take care of the farm, while he traveled far away to Australia to visit his cousins and have a good rest.

Dorothy was eager to go with him on this journey, and Uncle Henry thought she would be good company and help cheer him up; so he decided to take her along. The little girl was quite an experienced traveller, for she had once been carried by a cyclone as far away from home as the marvelous Land of Oz, and she had met with a good many adventures in that strange country before she managed to get back to Kansas again. So she wasn’t easily frightened, whatever happened, and when the wind began to howl and whistle, and the waves began to tumble and toss, our little girl didn’t mind the uproar the least bit.

“Of course we’ll have to stay in the cabin,” she said to Uncle Henry and the other passengers, “and keep as quiet as possible until the storm is over. For the Captain says if we go on deck we may be blown overboard.”

No one wanted to risk such an accident as that, you may be sure; so all the passengers stayed huddled up in the dark cabin, listening to the shrieking of the storm and the creaking of the masts and rigging and trying to keep from bumping into one another when the ship tipped sidewise.

Dorothy had almost fallen asleep when she was aroused with a start to find that Uncle Henry was missing. She couldn’t imagine where he had gone, and as he was not very strong she began to worry about him, and to fear he might have been careless enough to go on deck. In that case he would be in great danger unless he instantly came down again.

The fact was that Uncle Henry had gone to lie down in his little sleeping-berth, but Dorothy did not know that. She only remembered that Aunt Em had cautioned her to take good care of her uncle, so at once she decided to go on deck and find him, in spite of the fact that the tempest was now worse than ever, and the ship was plunging in a really dreadful manner. Indeed, the little girl found it was as much as she could do to mount the stairs to the deck, and as soon as she got there the wind struck her so fiercely that it almost tore away the skirts of her dress. Yet Dorothy felt a sort of joyous excitement in defying the storm, and while she held fast to the railing she peered around through the gloom and thought she saw the dim form of a man clinging to a mast not far away from her. This might be her uncle, so she called as loudly as she could:

But the wind screeched and howled so madly that she scarce heard her own voice, and the man certainly failed to hear her, for he did not move.