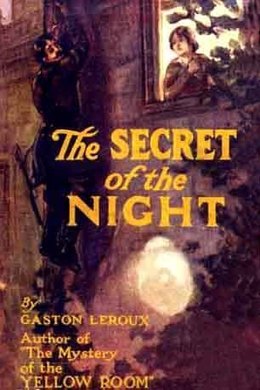 The Secret of the Night

The surviving Nihilists have condemned the Russian General Trebassof to death for the crimes he and his troops committed against the revolution. Three attempts on his life have failed, but the Czar is determined to keep him alive. The Czar assigns the redoubtable, French detective reporter, Rouletabille to the case. It quickly becomes apparent that one of the General’s own retinue is in league with the assassins! Why?

“Barinia, the young stranger has arrived.”

“I told you to show him to Natacha’s sitting-room. Didn’t you understand me, Ermolai?”

“Pardon, Barinia, but the young stranger, when I asked to search him, as you directed, flatly refused to let me.”

“Did you explain to him that everybody is searched before being allowed to enter, that it is the order, and that even my mother herself has submitted to it?”

“I told him all that, Barinia; and I told him about madame your mother.”

“That he was not madame your mother. He acted angry.”

“Well, let him come in without being searched.”

Ermolai bowed and returned to the garden. The “barinia” left the veranda, where she had come for this conversation with the old servant of General Trebassof, her husband, and returned to the dining-room in the datcha des Iles, where the gay Councilor Ivan Petrovitch was regaling his amused associates with his latest exploit at Cubat’s resort. They were a noisy company, and certainly the quietest among them was not the general, who nursed on a sofa the leg which still held him captive after the recent attack, that to his old coachman and his two piebald horses had proved fatal. The story of the always-amiable Ivan Petrovitch (a lively, little, elderly man with his head bald as an egg) was about the evening before. After having, as he said, “recure la bouche” for these gentlemen spoke French like their own language and used it among themselves to keep their servants from understanding–after having wet his whistle with a large glass of sparkling rosy French wine, he cried:

“You would have laughed, Feodor Feodorovitch. We had sung songs on the Barque and then the Bohemians left with their music and we went out onto the river-bank to stretch our legs and cool our faces in the freshness of the dawn, when a company of Cossacks of the Guard came along. I knew the officer in command and invited him to come along with us and drink the Emperor’s health at Cubat’s place. That officer, Feodor Feodorovitch, is a man who knows vintages and boasts that he has never swallowed a glass of anything so common as Crimean wine. When I named champagne he cried, ‘Vive l’Empereur!’ A true patriot. So we started, merry as school-children. The entire company followed, then all the diners playing little whistles, and all the servants besides, single file. At Cubat’s I hated to leave the companion-officers of my friend at the door, so I invited them in, too. They accepted, naturally. But the subalterns were thirsty as well. I understand discipline. You know, Feodor Feodorovitch, that I am a stickler for discipline. Just because one is gay of a spring morning, discipline should not be forgotten. I invited the officers to drink in a private room, and sent the subalterns into the main hall of the restaurant. Then the soldiers were thirsty, too, and I had drinks served to them out in the courtyard. Then, my word, there was a perplexing business, for now the horses whinnied. The brave horses, Feodor Feodorovitch, who also wished to drink the health of the Emperor. I was bothered about the discipline. Hall, court, all were full. And I could not put the horses in private rooms. Well, I made them carry out champagne in pails and then came the perplexing business I had tried so hard to avoid, a grand mixture of boots and horse-shoes that was certainly the liveliest thing I have ever seen in my life. But the horses were the most joyous, and danced as if a torch was held under their nostrils, and all of them, my word! were ready to throw their riders because the men were not of the same mind with them as to the route to follow! From our window we laughed fit to kill at such a mixture of sprawling boots and dancing hoofs. But the troopers finally got all their horses to barracks, with patience, for the Emperor’s cavalry are the best riders in the world, Feodor Feodorovitch. And we certainly had a great laugh!–Your health, Matrena Petrovna.”

These last graceful words were addressed to Madame Trebassof, who shrugged her shoulders at the undesired gallantry of the gay Councilor. She did not join in the conversation, excepting to calm the general, who wished to send the whole regiment to the guard-house, men and horses. And while the roisterers laughed over the adventure she said to her husband in the advisory voice of the helpful wife:

“Feodor, you must not attach importance to what that old fool Ivan tells you. He is the most imaginative man in the capital when he has had champagne.”