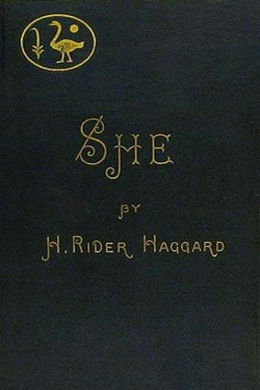 A History of Adventure

Ayesha is She-Who-Must-Be-Obeyed, a 2,000-year-old queen who rules a fabled lost city deep in a maze of African caverns. She has the occult wisdom of Isis, the eternal youth and beauty of Aphrodite, and the violent appetite of a lamia. Like A. Conan Doyle’s Lost World, She is one of those magnificent Victorian yarns about an expedition to a far-off locale shadowed by magic, mystery, and death.

There are some events of which each circumstance and surrounding detail seems to be graven on the memory in such fashion that we cannot forget it, and so it is with the scene that I am about to describe. It rises as clearly before my mind at this moment as though it had happened but yesterday.

It was in this very month something over twenty years ago that I, Ludwig Horace Holly, was sitting one night in my rooms at Cambridge, grinding away at some mathematical work, I forget what. I was to go up for my fellowship within a week, and was expected by my tutor and my college generally to distinguish myself. At last, wearied out, I flung my book down, and, going to the mantelpiece, took down a pipe and filled it. There was a candle burning on the mantelpiece, and a long, narrow glass at the back of it; and as I was in the act of lighting the pipe I caught sight of my own countenance in the glass, and paused to reflect. The lighted match burnt away till it scorched my fingers, forcing me to drop it; but still I stood and stared at myself in the glass, and reflected.

“Well,” I said aloud, at last, “it is to be hoped that I shall be able to do something with the inside of my head, for I shall certainly never do anything by the help of the outside.”

This remark will doubtless strike anybody who reads it as being slightly obscure, but I was in reality alluding to my physical deficiencies. Most men of twenty-two are endowed at any rate with some share of the comeliness of youth, but to me even this was denied. Short, thick-set, and deep-chested almost to deformity, with long sinewy arms, heavy features, deep-set grey eyes, a low brow half overgrown with a mop of thick black hair, like a deserted clearing on which the forest had once more begun to encroach; such was my appearance nearly a quarter of a century ago, and such, with some modification, it is to this day. Like Cain, I was branded–branded by Nature with the stamp of abnormal ugliness, as I was gifted by Nature with iron and abnormal strength and considerable intellectual powers. So ugly was I that the spruce young men of my College, though they were proud enough of my feats of endurance and physical prowess, did not even care to be seen walking with me. Was it wonderful that I was misanthropic and sullen? Was it wonderful that I brooded and worked alone, and had no friends–at least, only one? I was set apart by Nature to live alone, and draw comfort from her breast, and hers only. Women hated the sight of me. Only a week before I had heard one call me a “monster” when she thought I was out of hearing, and say that I had converted her to the monkey theory. Once, indeed, a woman pretended to care for me, and I lavished all the pent-up affection of my nature upon her. Then money that was to have come to me went elsewhere, and she discarded me. I pleaded with her as I have never pleaded with any living creature before or since, for I was caught by her sweet face, and loved her; and in the end by way of answer she took me to the glass, and stood side by side with me, and looked into it.

And so I stood and stared, and felt a sort of grim satisfaction in the sense of my own loneliness; for I had neither father, nor mother, nor brother; and as I did so there came a knock at my door.

I listened before I went to open it, for it was nearly twelve o’clock at night, and I was in no mood to admit any stranger. I had but one friend in the College, or, indeed, in the world–perhaps it was he.

Just then the person outside the door coughed, and I hastened to open it, for I knew the cough.

A tall man of about thirty, with the remains of great personal beauty, came hurrying in, staggering beneath the weight of a massive iron box which he carried by a handle with his right hand. He placed the box upon the table, and then fell into an awful fit of coughing. He coughed and coughed till his face became quite purple, and at last he sank into a chair and began to spit up blood. I poured out some whisky into a tumbler, and gave it to him. He drank it, and seemed better; though his better was very bad indeed.

“Why did you keep me standing there in the cold?” he asked pettishly. “You know the draughts are death to me.”

“Yes; and I verily believe it is my last visit,” he answered, with a ghastly attempt at a smile. “I am done for, Holly. I am done for. I do not believe that I shall see to-morrow.”