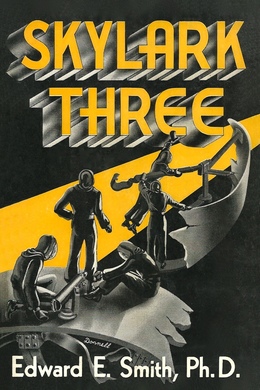 In this exhilarating sequel to The Skylark of Space, momentous danger again stalks genius inventor and interplanetary adventurer Dr. Richard Seaton. Seaton’s allies on the planet Kondal are suffering devastating attacks by the forces of the Third Planet. Even worse, the menacing and contemptuous Fenachrones are threatening to conquer the galaxy and wipe out all who oppose them. And don’t forget the dastardly machinations of Seaton’s arch-nemesis, DuQuesne, who embarks on a nefarious mission of his own. Against such vile foes and impossible odds, how is victory possible?

In the innermost private office of Steel, Brookings and DuQuesne stared at each other across the massive desk. DuQuesne’s voice was cold, his black brows were drawn together.

“Get this, Brookings, and get it straight. I’m shoving off at twelve o’clock tonight. My advice to you is to lay off Richard Seaton, absolutely. Don’t do a thing. NOTHING, understand? Just engrave these two words upon your brain–HOLD EVERYTHING. Keep on holding it until I get back, no matter how long that may be.”

“I am very much surprised at your change of front, Doctor. You are the last man I would have expected to be scared off after one engagement.”

“Don’t be any more of a fool than you have to, Brookings. There’s a lot of difference between being scared and knowing when you are simply wasting effort. As you remember, I tried to abduct Mrs. Seaton by picking her off with an attractor from a space-ship. I would have bet that nothing could have stopped me. Well, when they located me–probably with an automatic Osnomian emission detector–and heated me red-hot while I was still better than two hundred miles up, I knew then and there that they had us stopped: that there was nothing we could do except go back to my plan, abandon the abduction idea, and kill them all. Since my plan would take time, you objected to it, and sent an airplane to drop a five-hundred-pound bomb on them. Airplane, bomb and all, simply vanished. It didn’t explode, you remember, just flashed into light and disappeared. Then you pulled several more of your fool ideas, such as long-range bombardment, and so on. None of them worked. Still you’ve got the nerve to think that you can get them with ordinary gunmen! I’ve drawn you diagrams and shown you figures–I’ve told you in great detail and in one-syllable words exactly what we’re up against. Now I tell you again that they’ve GOT SOMETHING. If you had the brains of a louse you would know that anything I can’t do with a space-ship can’t be done by a mob of ordinary gangsters. I’m telling you, Brookings, that you can’t do it. My way is absolutely the only way that will work.”

“I may be back in six months. But on a trip of this kind anything can happen, so I am planning on being gone five years. Even that may not be enough–I am carrying supplies for ten years, and that box of mine in the vault is not to be opened until ten years from today.”

“But surely we shall be able to remove the obstructions ourselves in a few weeks. We always have.”

“Oh, quit kidding yourself, Brookings! This is no time for idiocy! You stand just as much chance of killing Seaton….”

“Still squeamish, eh? Your pussyfooting always did give me an acute pain. I’m for direct action, word and deed, first, last, and all the time. I repeat, you have exactly as much chance of killing Richard Seaton as a blind kitten has.”

“How do you arrive at that conclusion, Doctor? You seem very fond of belittling our abilities. Personally, I think that we shall be able to attain our objectives within a few weeks–certainly long before you can possibly return from such an extended trip as you have in mind. And since you are so fond of frankness, I will say that I think Seaton has you buffaloed, as you call it. Nine-tenths of these wonderful Osnomian things I am assured by competent authorities are scientifically impossible, and I think that the other one-tenth exists only in your own imagination. Seaton was lucky in that the airplane bomb was defective and exploded prematurely; and your space-ship got hot because of your injudicious speed through the atmosphere. We shall have everything settled by the time you get back.”

“If you have I’ll make you a present of the controlling interest in Steel and buy myself a chair in some home for feeble-minded old women. Your ignorance and unwillingness to believe any new idea do not change the facts in any particular. Even before they went to Osnome, Seaton was hard to get, as you found out. On that trip he learned so much new stuff that it is now impossible to kill him by any ordinary means. You should realize that fact when he kills every gangster you send against him. At all events be very, very careful not to kill–nor even hurt–his wife in any of your attacks, even by accident, until after you have killed him.”

“Such an event would be regrettable, certainly, in that it would remove all possibility of the abduction.”