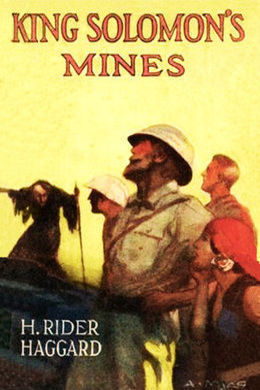 Following the disappearance of his brother, Sir Henry Curtis tracks down Allan Quartermain, a trader and hunter who knows Africa as well as any white man. Curtis’s brother has taken an expedition into the uncharted interior of Africa in search of the fabled diamond mines of King Solomon, but has not returned. Quartermain possesses an ancient map drawn in blood purporting to show the way to the mines and agrees to mount a rescue in return for a share of the bounty. The expedition journeys over perilous mountains, through scorching deserts and tribal war, but upon reaching the mines Quartermain must face his toughest challenge: the evil and clever Gagaoola. Haggard’s Quatermain adventures have been used as the template for the Hollywood movies about Indiana Jones.

It is a curious thing that at my age–fifty-five last birthday–I should find myself taking up a pen to try to write a history. I wonder what sort of a history it will be when I have finished it, if ever I come to the end of the trip! I have done a good many things in my life, which seems a long one to me, owing to my having begun work so young, perhaps. At an age when other boys are at school I was earning my living as a trader in the old Colony. I have been trading, hunting, fighting, or mining ever since. And yet it is only eight months ago that I made my pile. It is a big pile now that I have got it–I don’t yet know how big–but I do not think I would go through the last fifteen or sixteen months again for it; no, not if I knew that I should come out safe at the end, pile and all. But then I am a timid man, and dislike violence; moreover, I am almost sick of adventure. I wonder why I am going to write this book: it is not in my line. I am not a literary man, though very devoted to the Old Testament and also to the “Ingoldsby Legends.” Let me try to set down my reasons, just to see if I have any.

Second reason: Because I am laid up here at Durban with the pain in my left leg. Ever since that confounded lion got hold of me I have been liable to this trouble, and being rather bad just now, it makes me limp more than ever. There must be some poison in a lion’s teeth, otherwise how is it that when your wounds are healed they break out again, generally, mark you, at the same time of year that you got your mauling? It is a hard thing when one has shot sixty-five lions or more, as I have in the course of my life, that the sixty-sixth should chew your leg like a quid of tobacco. It breaks the routine of the thing, and putting other considerations aside, I am an orderly man and don’t like that. This is by the way.

Third reason: Because I want my boy Harry, who is over there at the hospital in London studying to become a doctor, to have something to amuse him and keep him out of mischief for a week or so. Hospital work must sometimes pall and grow rather dull, for even of cutting up dead bodies there may come satiety, and as this history will not be dull, whatever else it may be, it will put a little life into things for a day or two while Harry is reading of our adventures.

Fourth reason and last: Because I am going to tell the strangest story that I remember. It may seem a queer thing to say, especially considering that there is no woman in it–except Foulata. Stop, though! there is Gagaoola, if she was a woman, and not a fiend. But she was a hundred at least, and therefore not marriageable, so I don’t count her. At any rate, I can safely say that there is not a petticoat in the whole history.

Well, I had better come to the yoke. It is a stiff place, and I feel as though I were bogged up to the axle. But, “sutjes, sutjes,” as the Boers say–I am sure I don’t know how they spell it–softly does it. A strong team will come through at last, that is, if they are not too poor. You can never do anything with poor oxen. Now to make a start.

I, Allan Quatermain, of Durban, Natal, Gentleman, make oath and say–That’s how I headed my deposition before the magistrate about poor Khiva’s and Ventvögel’s sad deaths; but somehow it doesn’t seem quite the right way to begin a book. And, besides, am I a gentleman? What is a gentleman? I don’t quite know, and yet I have had to do with niggers–no, I will scratch out that word “niggers,” for I do not like it. I’ve known natives who are, and so you will say, Harry, my boy, before you have done with this tale, and I have known mean whites with lots of money and fresh out from home, too, who are not.

At any rate, I was born a gentleman, though I have been nothing but a poor travelling trader and hunter all my life. Whether I have remained so I known not, you must judge of that. Heaven knows I’ve tried. I have killed many men in my time, yet I have never slain wantonly or stained my hand in innocent blood, but only in self-defence. The Almighty gave us our lives, and I suppose He meant us to defend them, at least I have always acted on that, and I hope it will not be brought up against me when my clock strikes. There, there, it is a cruel and a wicked world, and for a timid man I have been mixed up in a great deal of fighting. I cannot tell the rights of it, but at any rate I have never stolen, though once I cheated a Kafir out of a herd of cattle. But then he had done me a dirty turn, and it has troubled me ever since into the bargain.

Well, it is eighteen months or so ago since first I met Sir Henry Curtis and Captain Good. It was in this way. I had been up elephant hunting beyond Bamangwato, and had met with bad luck. Everything went wrong that trip, and to top up with I got the fever badly.