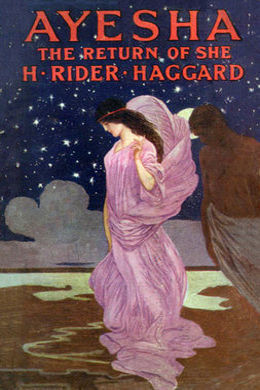 The Return of She

In this heart-stopping sequel to the classic novel “She,” Allan Quatermain discovers a lost kingdom in the heart of Africa, ruled by the mysterious Ayesha. A haunting story of love and enchantment that spans the centuries to defy death and time. As to be expected from Haggard, this book is full of adventure – a great avalanche, a chase by the death hounds, Ayesha’s reincarnation, and of course the ultimate battle with Kalloon…there’s even Ayesha’s meeting with her “servants” – that is shadows and ghosts from beyond and the past. Not to be missed by Haggard fans.

Hard on twenty years have gone by since that night of Leo’s vision–the most awful years, perhaps, which were ever endured by men–twenty years of search and hardship ending in soul-shaking wonder and amazement.

My death is very near to me, and of this I am glad, for I desire to pursue the quest in other realms, as it has been promised to me that I shall do. I desire to learn the beginning and the end of the spiritual drama of which it has been my strange lot to read some pages upon earth.

I, Ludwig Horace Holly, have been very ill; they carried me, more dead than alive, down those mountains whose lowest slopes I can see from my window, for I write this on the northern frontiers of India. Indeed any other man had long since perished, but Destiny kept my breath in me, perhaps that a record might remain. I, must bide here a month or two till I am strong enough to travel homewards, for I have a fancy to die in the place where I was born. So while I have strength I will put the story down, or at least those parts of it that are most essential, for much can, or at any rate must, be omitted. I shrink from attempting too long a book, though my notes and memory would furnish me with sufficient material for volumes.

I will begin with the Vision.

After Leo Vincey and I came back from Africa in 1885, desiring solitude, which indeed we needed sorely to recover from the fearful shock we had experienced, and to give us time and opportunity to think, we went to an old house upon the shores of Cumberland that has belonged to my family for many generations. This house, unless somebody has taken it believing me to be dead, is still my property and thither I travel to die.

Those whose eyes read the words I write, if any should ever read them, may ask–What shock?

Well, I am Horace Holly, and my companion, my beloved friend, my son in the spirit whom I reared from infancy was–nay, is–Leo Vincey.

We are those men who, following an ancient clue, travelled to the Caves of Kor in Central Africa, and there discovered her whom we sought, the immortal She-who-must-be-obeyed. In Leo she found her love, that re-born Kallikrates, the Grecian priest of Isis whom some two thousand years before she had slain in her jealous rage, thus executing on him the judgment of the angry goddess. In her also I found the divinity whom I was doomed to worship from afar, not with the flesh, for that is all lost and gone from me, but, what is sorer still, because its burden is undying, with the will and soul which animate a man throughout the countless eons of his being. The flesh dies, or at least it changes, and its passions pass, but that other passion of the spirit–that longing for oneness–is undying as itself.

What crime have I committed that this sore punishment should be laid upon me? Yet, in truth, is it a punishment? May it not prove to be but that black and terrible Gate which leads to the joyous palace of Rewards? She swore that I should ever be her friend and his and dwell with them eternally, and I believe her.

For how many winters did we wander among the icy hills and deserts! Still, at length, the Messenger came and led us to the Mountain, and on the Mountain we found the Shrine, and in the Shrine the Spirit. May not these things be an allegory prepared for our instruction? I will take comfort. I will hope that it is so. Nay, I am sure that it is so.

It will be remembered that in Kor we found the immortal woman. There before the flashing rays and vapours of the Pillar of Life she declared her mystic love, and then in our very sight was swept to a doom so horrible that even now, after all which has been and gone, I shiver at its recollection. Yet what were Ayesha’s last words? “Forget me not . . . have pity on my shame. I die not. I shall come again and shall once more be beautiful. I swear it–it is true.”

Well, I cannot set out that history afresh. Moreover it is written; the man whom I trusted in the matter did not fail me, and the book he made of it seems to be known throughout the world, for I have found it here in English, yes, and read it first translated into Hindostani. To it then I refer the curious.

In that house upon the desolate sea-shore of Cumberland, we dwelt a year, mourning the lost, seeking an avenue by which it might be found again and discovering none. Here our strength came back to us, and Leo’s hair, that had been whitened in the horror of the Caves, grew again from grey to golden. His beauty returned to him also, so that his face was as it had been, only purified and saddened.

Well I remember that night–and the hour of illumination. We were heart-broken, we were in despair. We sought signs and could find none. The dead remained dead to us and no answer came to all our crying.