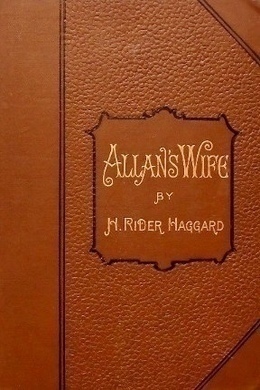 It may be remembered that in the last pages of his diary, written just before his death, Allan Quatermain makes allusion to his long dead wife, stating that he has written of her fully elsewhere. When his death was known, his papers were handed to myself as his literary executor. Among them I found two manuscripts, of which the following is one. The other is simply a record of events wherein Mr. Quatermain was not personally concerned - a Zulu novel, the story of which was told to him by the hero many years after the tragedy had occurred. But with this we have nothing to do at present.

It may be remembered that in the last pages of his diary, written just before his death, Allan Quatermain makes allusion to his long dead wife, stating that he has written of her fully elsewhere.

When his death was known, his papers were handed to myself as his literary executor. Among them I found two manuscripts, of which the following is one. The other is simply a record of events wherein Mr. Quatermain was not personally concerned–a Zulu novel, the story of which was told to him by the hero many years after the tragedy had occurred. But with this we have nothing to do at present.

I have often thought (Mr. Quatermain’s manuscript begins) that I would set down on paper the events connected with my marriage, and the loss of my most dear wife. Many years have now passed since that event, and to some extent time has softened the old grief, though Heaven knows it is still keen enough. On two or three occasions I have even begun the record. Once I gave it up because the writing of it depressed me beyond bearing, once because I was suddenly called away upon a journey, and the third time because a Kaffir boy found my manuscript convenient for lighting the kitchen fire.

But now that I am at leisure here in England, I will make a fourth attempt. If I succeed, the story may serve to interest some one in after years when I am dead and gone; before that I should not wish it to be published. It is a wild tale enough, and suggests some curious reflections.

I am the son of a missionary. My father was originally curate in charge of a small parish in Oxfordshire. He had already been some ten years married to my dear mother when he went there, and he had four children, of whom I was the youngest. I remember faintly the place where we lived. It was an ancient long grey house, facing the road. There was a very large tree of some sort in the garden. It was hollow, and we children used to play about inside of it, and knock knots of wood from the rough bark. We all slept in a kind of attic, and my mother always came and kissed us when we were in bed. I used to wake up and see her bending over me, a candle in her hand. There was a curious kind of pole projecting from the wall over my bed. Once I was dreadfully frightened because my eldest brother made me hang to it by my hands. That is all I remember about our old home. It has been pulled down long ago, or I would journey there to see it.

A little further down the road was a large house with big iron gates to it, and on the top of the gate pillars sat two stone lions, which were so hideous that I was afraid of them. Perhaps this sentiment was prophetic. One could see the house by peeping through the bars of the gates. It was a gloomy-looking place, with a tall yew hedge round it; but in the summer-time some flowers grew about the sun-dial in the grass plat. This house was called the Hall, and Squire Carson lived there. One Christmas–it must have been the Christmas before my father emigrated, or I should not remember it–we children went to a Christmas-tree festivity at the Hall. There was a great party there, and footmen wearing red waistcoats stood at the door. In the dining-room, which was panelled with black oak, was the Christmas-tree. Squire Carson stood in front of it. He was a tall, dark man, very quiet in his manners, and he wore a bunch of seals on his waistcoat. We used to think him old, but as a matter of fact he was then not more than forty. He had been, as I afterwards learned, a great traveller in his youth, and some six or seven years before this date he married a lady who was half a Spaniard–a papist, my father called her. I can remember her well. She was small and very pretty, with a rounded figure, large black eyes, and glittering teeth. She spoke English with a curious accent. I suppose that I must have been a funny child to look at, and I know that my hair stood up on my head then as it does now, for I still have a sketch of myself that my mother made of me, in which this peculiarity is strongly marked. On this occasion of the Christmas-tree I remember that Mrs. Carson turned to a tall, foreign-looking gentleman who stood beside her, and, tapping him affectionately on the shoulder with her gold eye-glasses, said–

The tall gentleman pulled at his moustache, and, taking Mrs. Carson’s hand in his, began to smooth my hair down with it till I heard her whisper–

Thomas was the name of Mr. Carson, her husband.