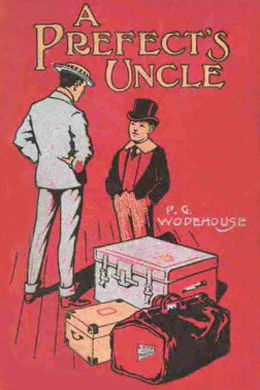 One of Wodehouse’s early novels set in an English public school, a school story that revolves around cricket, stolen money, and an embarrassing uncle (who happens to be younger than his nephew) who enrolls in in his school. The arrival of Farnie at Beckford College brings much excitement and scandal to the school and the disruption of some important cricket matches.

Marriott walked into the senior day-room, and, finding no one there, hurled his portmanteau down on the table with a bang. The noise brought William into the room. William was attached to Leicester’s House, Beckford College, as a mixture of butler and bootboy. He carried a pail of water in his hand. He had been engaged in cleaning up the House against the conclusion of the summer holidays, of which this was the last evening, by the simple process of transferring all dust, dirt, and other foreign substances from the floor to his own person.

‘Hullo, William,’ said Marriott. ‘How are you? Still jogging along? That’s a mercy. I say, look here, I want a quiet word in season with the authorities. They must have known I was coming back this evening. Of course they did. Why, they specially wrote and asked me. Well, where’s the red carpet? Where’s the awning? Where’s the brass band that ought to have met me at the station? Where’s anything? I tell you what it is, William, my old companion, there’s a bad time coming for the Headmaster if he doesn’t mind what he’s doing. He must learn that life is stern and life is earnest, William. Has Gethryn come back yet?’

William, who had been gasping throughout this harangue, for the intellectual pressure of Marriott’s conversation (of which there was always plenty) was generally too much for him, caught thankfully at the last remark as being the only intelligible one uttered up to present date, and made answer–

‘Oh! Right. Thanks. Goodbye, William. Give my respects to the cook, and mind you don’t work too hard. Think what it would be if you developed heart disease. Awful! You mustn’t do it, William.’

Marriott vanished, and William, slightly dazed, went about his professional duties once more. Marriott walked out into the grounds in search of Gethryn. Gethryn was the head of Leicester’s this term, vice Reynolds departed, and Marriott, who was second man up, shared a study with him. Leicester’s had not a good name at Beckford, in spite of the fact that it was generally in the running for the cricket and football cups. The fact of the matter was that, with the exception of Gethryn, Marriott, a boy named Reece, who kept wicket for the School Eleven, and perhaps two others, Leicester’s seniors were not a good lot. To the School in general, who gauged a fellow’s character principally by his abilities in the cricket and football fields, it seemed a very desirable thing to be in Leicester’s. They had been runners-up for the House football cup that year, and this term might easily see the cricket cup fall to them. Amongst the few, however, it was known that the House was passing through an unpleasant stage in its career. A House is either good or bad. It is seldom that it can combine the advantages of both systems. Leicester’s was bad.

This was due partly to a succession of bad Head-prefects, and partly to Leicester himself, who was well-meaning but weak. His spirit was willing, but his will was not spirited. When things went on that ought not to have gone on, he generally managed to avoid seeing them, and the things continued to go on. Altogether, unless Gethryn’s rule should act as a tonic, Leicester’s was in a bad way.

The Powers that Be, however, were relying on Gethryn to effect some improvement. He was in the Sixth, the First Fifteen, and the First Eleven. Also a backbone was included in his anatomy, and if he made up his mind to a thing, that thing generally happened.

The Rev. James Beckett, the Headmaster of Beckford, had formed a very fair estimate of Gethryn’s capabilities, and at the moment when Marriott was drawing the field for the missing one, that worthy was sitting in the Headmaster’s study with a cup in his right hand and a muffin (half-eaten) in his left, drinking in tea and wisdom simultaneously. The Head was doing most of the talking. He had led up to the subject skilfully, and, once reached, he did not leave it. The text of his discourse was the degeneracy of Leicester’s.

‘Now, you know, Gethryn–another muffin? Help yourself. You know, Reynolds–well, he was a capital boy in his way, capital, and I’m sure we shall all miss him very much–but he was not a good head of a House. He was weak. Much too weak. Too easy-going. You must avoid that, Gethryn. Reynolds….’ And much more in the same vein. Gethryn left the room half an hour later full of muffins and good resolutions. He met Marriott at the fives-courts.

‘Where have you been to?’ asked Marriott. ‘I’ve been looking for you all over the shop.’

‘I and my friend the Headmaster,’ said Gethryn, ‘have been having a quiet pot of tea between us.’

‘Really? Was he affable?’