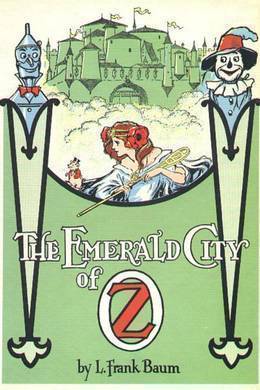 The Emerald City of Oz

Book 6 of L. Frank Baum’s beloved OZ books, in which the wicked Nome king, who plots to conquer Oz and enslave its people, prepares to invade the Emerald City just as Dorothy and her Aunt Em and Uncle Henry arrive!

The Nome King was in an angry mood, and at such times he was very disagreeable. Every one kept away from him, even his Chief Steward Kaliko.

Therefore the King stormed and raved all by himself, walking up and down in his jewel-studded cavern and getting angrier all the time. Then he remembered that it was no fun being angry unless he had some one to frighten and make miserable, and he rushed to his big gong and made it clatter as loud as he could.

In came the Chief Steward, trying not to show the Nome King how frightened he was.

Kaliko ran out as fast as his spindle legs could carry his fat round body, and soon the Chief Counselor entered the cavern. The King scowled and said to him:

“I’m in great trouble over the loss of my Magic Belt. Every little while I want to do something magical, and find I can’t because the Belt is gone. That makes me angry, and when I’m angry I can’t have a good time. Now, what do you advise?”

“Some people,” said the Chief Counselor, “enjoy getting angry.”

“But not all the time,” declared the King. “To be angry once in a while is really good fun, because it makes others so miserable. But to be angry morning, noon and night, as I am, grows monotonous and prevents my gaining any other pleasure in life. Now, what do you advise?”

Hearing this, the King glared at his Counselor with a furious expression and tugged at his own long white whiskers until he pulled them so hard that he yelled with pain.

“You are a fool!” he exclaimed.

“I share that honor with your Majesty,” said the Chief Counselor.

The King roared with rage and stamped his foot.

“Take this Chief Counselor and throw him away.”

Then the guards took the Chief Counselor, and bound him with chains to prevent his struggling, and threw him away. And the King paced up and down his cavern more angry than before.

Finally he rushed to his big gong and made it clatter like a fire-alarm. Kaliko appeared again, trembling and white with fear.

“Fetch my pipe!” yelled the King.

“Your pipe is already here, your Majesty,” replied Kaliko.

“Then get my tobacco!” roared the King.

“The tobacco is in your pipe, your Majesty,” returned the Steward.

“Then bring a live coal from the furnace!” commanded the King.

“The tobacco is lighted, and your Majesty is already smoking your pipe,” answered the Steward.

“Why, so I am!” said the King, who had forgotten this fact; “but you are very rude to remind me of it.”

“I am a lowborn, miserable villain,” declared the Chief Steward, humbly.

The Nome King could think of nothing to say next, so he puffed away at his pipe and paced up and down the room. Finally he remembered how angry he was, and cried out:

“What do you mean, Kaliko, by being so contented when your monarch is unhappy?”

“What makes you unhappy?” asked the Steward.

“I’ve lost my Magic Belt. A little girl named Dorothy, who was here with Ozma of Oz, stole my Belt and carried it away with her,” said the King, grinding his teeth with rage.

“She captured it in a fair fight,” Kaliko ventured to say.

“But I want it! I must have it! Half my power is gone with that Belt!” roared the King.

“Because there is a deadly desert all around that fairy country, which no one is able to cross. You know that fact as well as I do, your Majesty. Never mind the lost Belt. You have plenty of power left, for you rule this underground kingdom like a tyrant, and thousands of Nomes obey your commands. I advise you to drink a glass of melted silver, to quiet your nerves, and then go to bed.”

The King grabbed a big ruby and threw it at Kaliko’s head. The Steward ducked to escape the heavy jewel, which crashed against the door just over his left ear.

“Get out of my sight! Vanish! Go away–and send General Blug here,” screamed the Nome King.

Kaliko hastily withdrew, and the Nome King stamped up and down until the General of his armies appeared.

This Nome was known far and wide as a terrible fighter and a cruel, desperate commander. He had fifty thousand Nome soldiers, all well drilled, who feared nothing but their stern master. Yet General Blug was a trifle uneasy when he arrived and saw how angry the Nome King was.